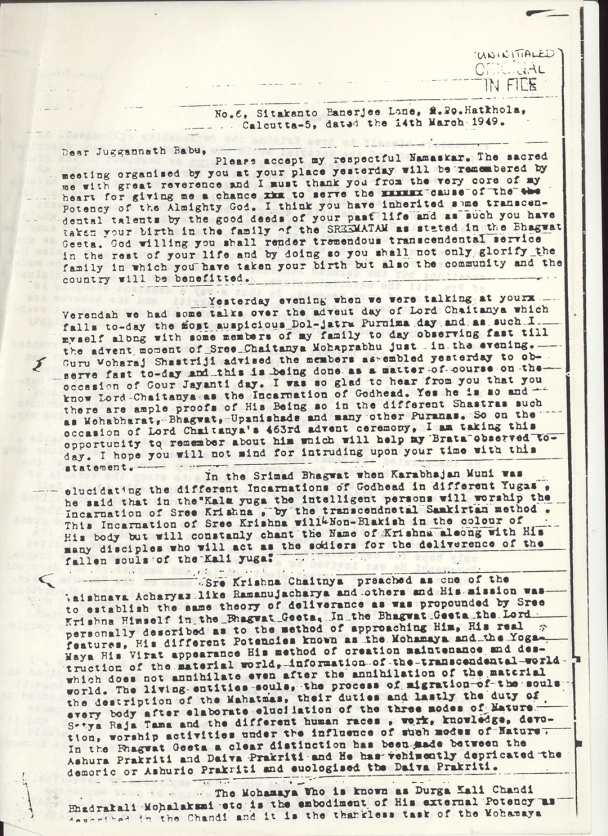 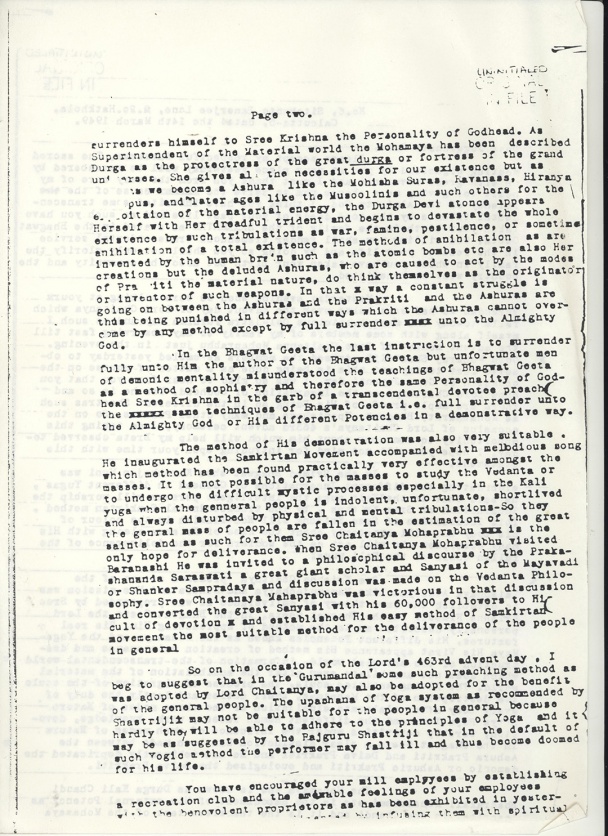 Dear Juggannath Babu,
Please accept my respectful Namaskara. The sacred meeting organized by you at your place yesterday will be remembered by me with great reverence and I must thank you from the very core of my heart for giving me a chance to serve the cause of the Potency of the Almighty God. I think you have inherited some transcendental talents by the good deeds of your past life and as such you have taken your birth in the family of the SRIMATAM as stated in the Bhagavad-gita. God willing you shall render tremendous transcendental service in the rest of your life and by doing so you shall not only glorify the family in which you have taken your birth but also the community and the country will be benefited.

Yesterday evening when we were talking at your veranda we had some talks over the advent day of Lord Chaitanya which falls today the most auspicious Dol-jatra Purnima day and as such I myself along with some members of my family today observing fast till the advent moment of Sree Chaitanya Mohaprabhu just in the evening. Guru Moharaj Shastriji advised the members assembled yesterday to observe fast today and this is being done as a matter of course on the occasion of Gour Jayanti day. I was so glad to hear from you that you know Lord Chaitanya as the incarnation of Godhead. Yes he is so and there are ample proofs of His being so in the different Shastras such as Mohabharat, Bhagwat, Upanishads and many other Puranas. So on the occasion of Lord Chaitanya's 463rd advent ceremony, I am taking this opportunity to remember about him which will help my Brata observed today. I hope you will not mind for intruding upon your time with this statement.

In the Srimad-Bhagwat when Karabhajan Muni was elucidating the different incarnations of Godhead in different Yugas, he said that "In the Kali-yuga the intelligent persons will worship the incarnation of Sree Krishna, by the transcendental Samkirtan method. This incarnation of Sree Krishna will be Non-Blackish in the color of His body but will constantly chant the Name of Krishna along with His many disciples who will act as the soldiers for the deliverance of the fallen souls of the Kali-yuga.

Sri Krishna Chaitanya preached as one of the Vaishnava Acharyas like Ramanujacharya and others and His mission was to establish the same theory of deliverance as was propounded by Sree Krishna Himself in the Bhagwat-Geeta. In the Bhagwat Geeta the Lord personally described as to the method of approaching Him, His real features, His different Potencies known as the Mohamaya and the yogamaya, His virat appearance His method of creation maintenance and destruction of the material world, information of the transcendental world which does not annihilate even after the annihilation of the material world. The living entities souls, the process of migration of the souls the description of the Mahatmas, their duties and lastly the duty of everybody after elaborate elucidation of the three modes of Nature, Satya Raja Tama and the different human races, work, knowledge, devotion, worship activities under the influence of such modes of Nature. In the Bhagavat Geeta a clear distinction has been made between the Ashura Prakrti and Daiva Prakrti and He has vehemently deprecated the demonic or Ashuric Prakriti and eulogised the Daiva Prakriti.

The Mohamaya Who is known as Durga, Kali, Chandi, Bhadrakali, Mohalaksmi, etc is the embodiment of His external Potency as described in the Chandi and it is the thankless task of the Mohamaya [to punish the asuras with Her all powerful weapons in the ten direction of the material world. She does not only create and maintain this material world but also she annihilates it according to the direction of the almighty God. In the Bhagavad-gita this Mahamaya has also been described as Daivi Maya and She is so powerful that the asuras cannot by-pass Her at any rate. The asura can get remission from the stroke of the trisula of Mohamaya when he the asura,] [text missing] surrenders himself to Sree Krishna the Personality of Godhead. As Superintendent of the material world the Mohamaya has been described Durga as the protectress of the great durga or fortress of the grand universes. She gives all the necessities for our existence but as soon as we become an Ashura like the Mohisha Suras, Ravanas, Hiranyakasipus, and in later ages like the Mussolinis and such others for the exploitation of the material energy, the Durga Devi at once appears Herself with Her dreadful trident and begins to devastate the whole existence by such tribulations as war, famine, pestilence, or sometimes annihilation of a total existence. The methods of annihilation as are invented by the human brain such as the atomic bombs etc are also Her creations but the deluded Ashuras, who are caused to act by the modes of Prakriti the material nature, do think themselves as the originator or inventor of such weapons. In that way a constant struggle is going on between the asuras and the prakrti and the asuras are thus being punished in different ways which the asuras cannot overcome by any method except by full surrender unto the Almighty God.

The method of His demonstration was also very suitable. He inaugurated the Sankirtan movement accompanied with melodious song which method has been found practically very effective amongst the masses. It is not possible for the masses to study the Vedanta or to undergo the difficult mystic processes especially in the Kali-yuga when the general people is indolent, unfortunate, shortlived and always disturbed by physical and mental tribulations. So they the general mass of people are fallen in the estimation of the great saints and as such for them Sree Chaitanya Mahaprabhu is the only hope for deliverance. When Sree Chaitanya Mahaprabhu visited Baranasi He was invited to a philosophical discourse by the Prakashananda Saraswati a great giant scholar and Sanyasi of the Mayavadi or Shankar Sampradaya and discussion was made on the Vedanta philosophy. Shree Chaitanya Mahaprabhu was victorious in that discussion and converted the great Sanyasi with his 60,000 followers to His cult of devotion and established His easy method of Samkirtan movement the most suitable method for the deliverance of the people in general.

So on the occasion of the Lord's 463rd advent day, I beg to suggest that in the Gurumandal some such preaching method as was adopted by Lord Chaitanya, may also be adopted for the benefit of the general people. The upashana of yoga system as recommended by Shastriji may not be suitable for the people in general because hardly they will be able to adhere to the principles of yoga and it may be as suggested by the Rajguru Shastriji that in the default of such yogic method the performer may fall ill and thus become doomed for his life.

You have encouraged your mill employees by establishing a recreation club and the amenable feelings of your employees with the benevolent proprietors as has been exhibited in [yesterday's function, may be supplemented by infusing them with spiritual inspiration by the simple method as done by Lord Caitanya. In the last portion of His transcendental pastimes, Lord Caitanya lived in Puri-dhama and worshiped the Lord Jagannatha. By Some way or other your mill area has been named as the Jagannatha Puri and I suggest that an actual temple of Sri Jagannathaji may be erected by the guru-mandala for the benefit of these mill workers. If they simply make melodious kirtana of Rama or Krishna or both combined and they are offered the prasadam of Sri Jagannatha surely they shall imbibe the spiritual tendency inherent in every human]