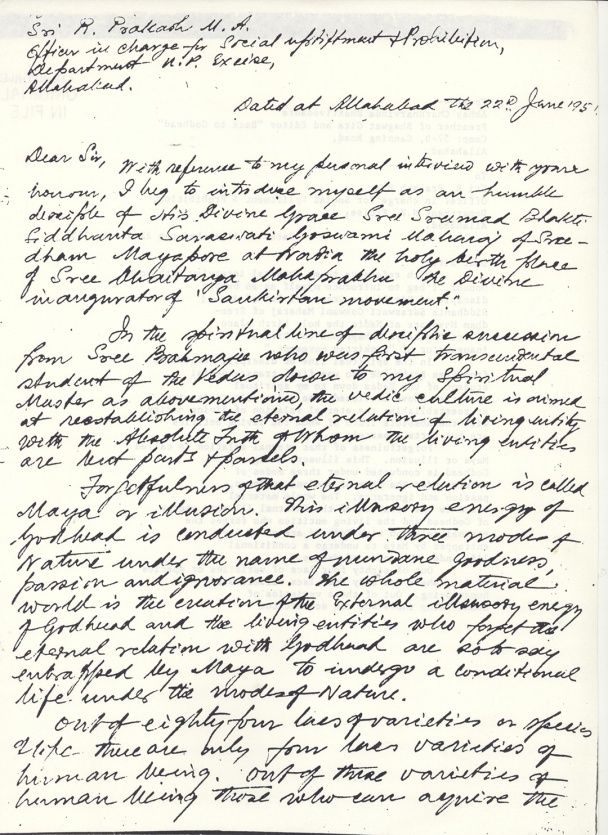 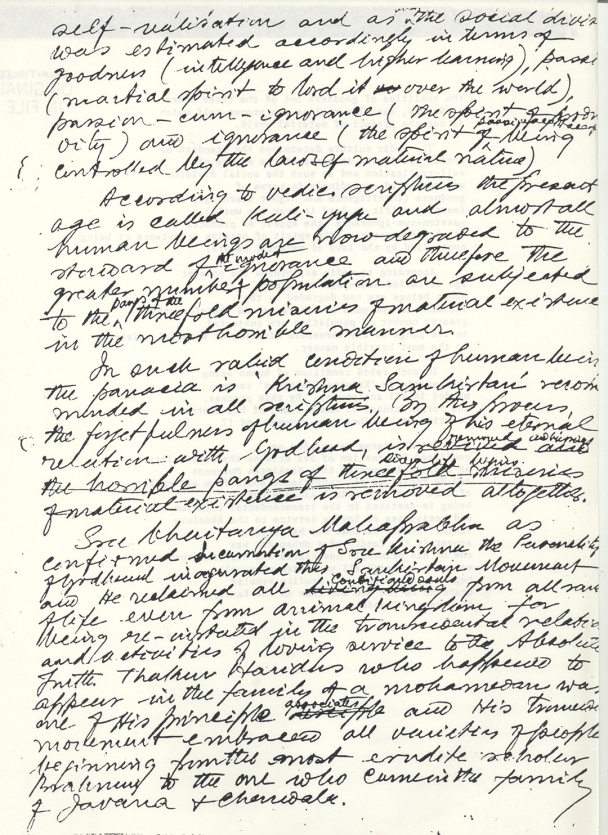 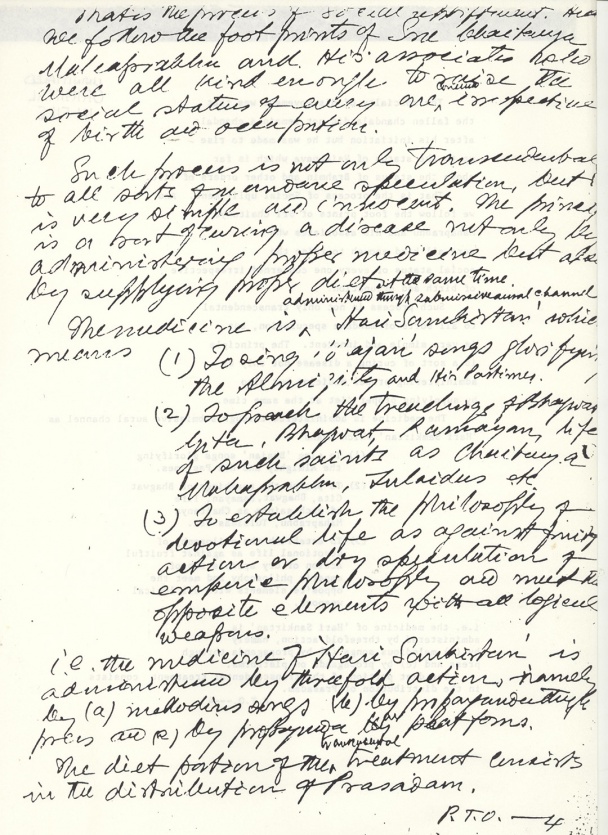 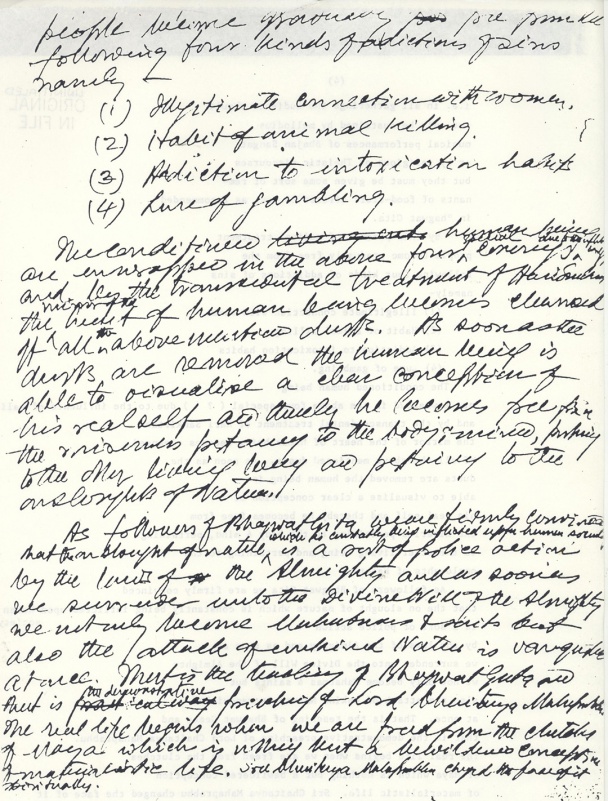 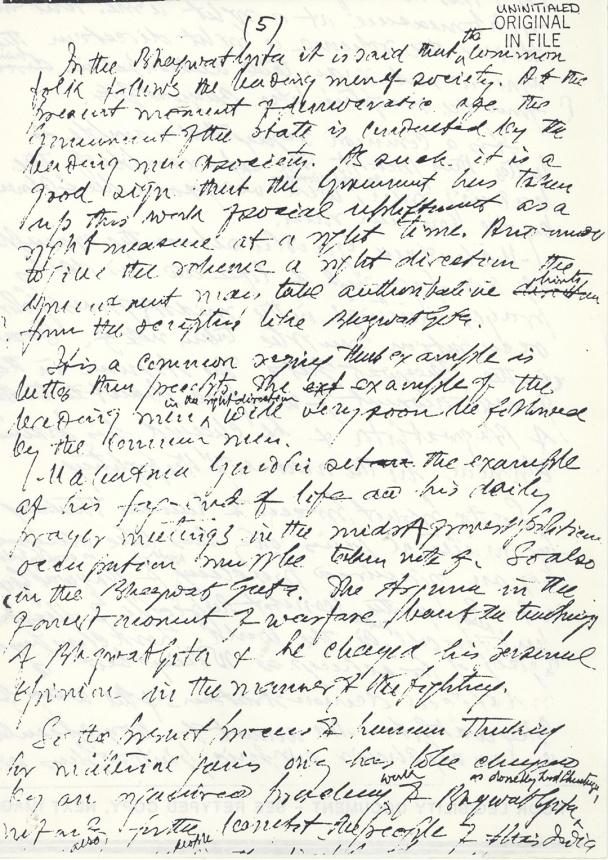 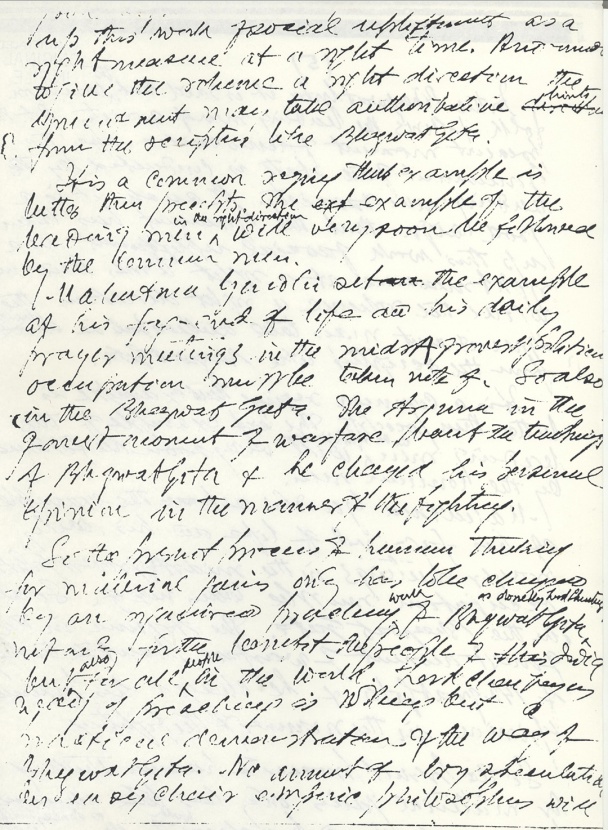 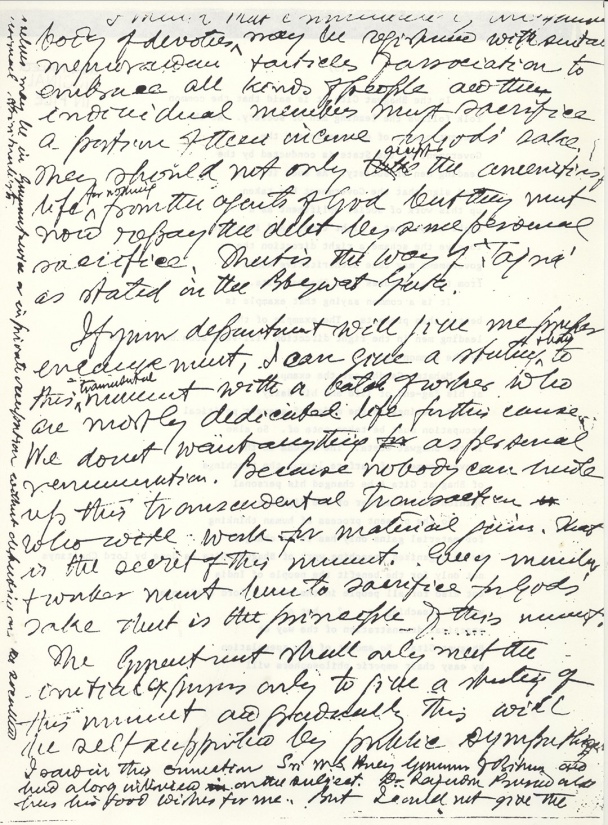 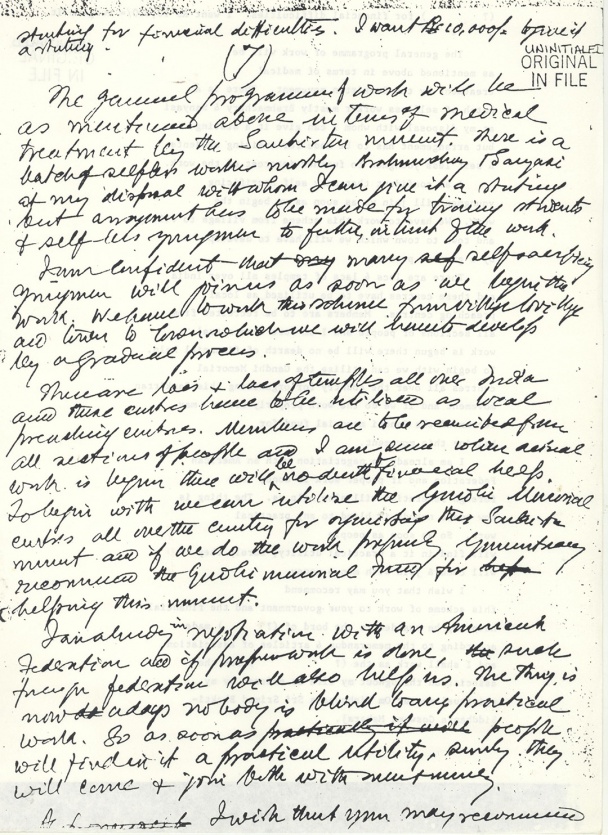 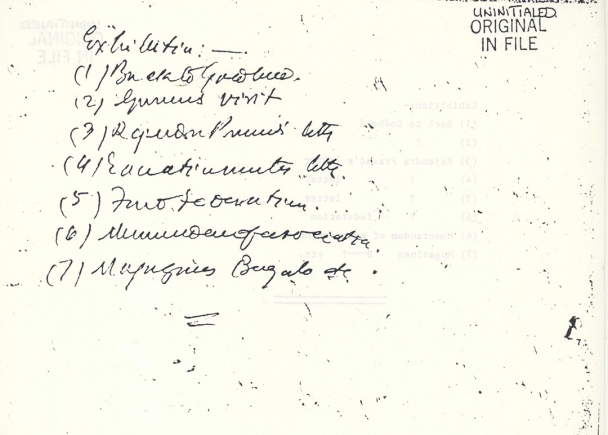 Dear Sir,
With reference to my personal interview with your honor, I beg to introduce myself as an humble disciple of His Divine Grace Sri Srimad Bhaktisiddhanta Sarasvati Goswami Maharaj of Sreedham Mayapore at Nadia the holy birth place of Sri Chaitanya Mahaprabhu the divine inaugurator of Sankirtan movement.

In the spiritual line of disciplic succession from Sree Brahmaji who was first transcendental student of the Vedas down to my spiritual master as above mentioned, the Vedic culture is aimed at reestablishing the eternal relation of living entity with the Absolute Truth of Whom the living entities are but parts & parcels.

Forgetfulness of that eternal relation is called maya or illusion. This illusory energy of Godhead is conducted under three modes of nature under the name of mundane goodness, passion and ignorance. The whole material world is the creation of the external illusory energy of Godhead and the living entities who forget the eternal relation with Godhead are so to say entrapped by Maya to undergo a conditional life under the modes of Nature.

The Vedic culture determines the standard of social upliftment in terms of the degree of [Text Missing] self-realization and as such the social division was estimated accordingly in terms of goodness (intelligence and higher learning), passion (martial spirit to lord it over the world), passion-cum-ignorance (the spirit of productivity) and ignorance (the spirit of passive acceptance of being controlled by the laws of material nature).

According to Vedic scriptures the present age is called Kali-yuga and almost all human beings are now degraded to the standard of the mode of ignorance and therefore the greater number of population are subjected to the pangs of the threefold miseries of material existence in the most horrible manner.

In such rabid condition of human being the panacea is "Krishna sankirtana" recommended in all scriptures. By this process, the forgetfulness of human being of his eternal relation with Godhead, is removed altogether.

Sree Chaitanya Mahaprabhu as confirmed incarnation of Sree Krishna the Personality of Godhead inaugurated this sankirtan movement and He reclaimed all conditioned souls from all ranks of life even from animal kingdom for being re-instated in the transcendental relation and activities of loving service to the Absolute Truth. Thakura Haridas who happened to appear in the family of a Mohammedan was one of His principle associates and His transcendental movement embraced all varieties of people beginning from the most erudite scholar brahmanas to the one who came in the family of Javana & Chandala.

[Text Missing] The specialty of His movement was that the fallen candala did not remain a candala after his initiation but he was made to rise up to the status of Vaisnava which is far above the status of brahmana and other orders of life. [Text Missing]

That is the process of social upliftment. And we follow the footprints of Sree Chaitanya Mahaprabhu and His associates who were all kind enough to raise the social status of every one concerned irrespective of birth and occupation.

Such process is not only transcendental to all sorts of mundane speculation, but is very simple and innocent. The principle is a sort of curing a disease not only by administering proper medicine but also by supplying proper diet at the same time.

(1) To sing "Bhajan" songs glorifying the Almighty and His Pastimes.
(2) To preach the teachings of Bhagwat Gita, Bhagwat, Ramayana, life of such saints as Chaitanya Mahaprabhu, Tulsidas etc.
(3) To establish the philosophy of devotional life as against fruitful action or dry speculation of empiric philosophy and meet the opposite elements with all logical weapons.

i.e the medicine of "Hari Sankirtan" is administered by threefold action, namely by (a) melodious songs (b) by propaganda through press and (c) by propaganda on platforms.

The diet portion of the transcendental treatment consists in the distribution of Prasadam. [Text Missing] i.e. in all gatherings the audience should not only be sustained by melodious musical performances of Bhajan Sangat or by religious or theistic discourses but they must be given some sort of remnants of food-stuff offered to God, as recommended in Bhagavad-gita.

The conditioned human beings are enwrapped in the above four special due to the influence [Text Missing] of Kali-yuga and by the transcendental treatment of Hari Sankirtan the mirror of the heart of human being becomes cleansed of all the above mentioned dusts. As soon as the dusts are removed the human being is able to visualize a clear conception of his real self and thereby he becomes free from the miseries pertaining to the body & mind, pertaining to the other living being and pertaining to the onslaughts of nature.

As followers of Bhagawat Gita we are firmly convinced that the onslaught of nature which is constantly being inflicted upon human society is a sort of police action by the laws of the Almighty and as soon as we surrender unto the Divine Will of the Almighty we not only become Mahatmas & saints but also the attack of unkind Nature is vanquished at once. That is the teaching of Bhagawat Geeta and that is the demonstrative preaching of Lord Chaitanya Mahaprabhu. The real life begins when we are freed from the clutches of Maya which is nothing but a bewildered conception of materialistic life. Sree Chaitanya Mahaprabhu changed the face of it spiritually.

In the Bhagwat Gita it is said that the common folk follows the leading men of society. At the present moment of democratic age the Government of the State is conducted by the leading men of society. As such it is a good sign that the Government has taken up this work of social upliftment as a right measure at a right time. And in order to give the scheme a right direction the government may take authoritative hints from the scriptures like Bhagwat Gita.

It is a common saying that example is better than precepts. The example of the leading men in the right direction will very soon be followed by the common men.

Mahatma Gandhi set the example at his fag-end of life and his daily prayer meetings in the midst of gravest political occupation must be taken note of. So also in the Bhagwat Geeta. The Arjuna in the gravest moment of warfare learnt the teachings of Bhagwat Geeta & he changed his personal opinion in the manner of the fighting.

So the present process of human thinking for material gains only has to be changed by an organized preaching work of Bhagawat Gita as done by Lord Chaitanya not only for the benefit the people of India but also for all people in the world. Lord Chaitanya's way of preaching is but a practical demonstration of the way of Bhagavad-gita. No amount of dry speculation by easy chair empiric philosophers will [Text Missing] be able to implement the teachings of Bhagavad-gita unless we adopt the practical ways of Lord Caitanya as above mentioned. [Text Missing]

I think that immediately an organized body of devotees may be registered with suitable memorandum & articles of association to embrace all kinds of people and then individual members must sacrifice a portion of their income for God's sake. They should not only accept the amenities of life for nothing from the agents of God but they must now repay the debit by some personal sacrifice. That is the way of "Yajna" as stated in the Bhagwat Gita.

If your department will give me proper encouragement, I can give a to this transcendental movement with a batch of worker who are mostly dedicated life for this cause. We do not want anything as personal renumeration. Because nobody can write up this transcendental transaction who will work for material gain. That is the secret of this movement. Every member & worker must learn to sacrifice for Gods' sake that is the principle of this movement.

The Government shall only meet the initial expenses only to give a of this movement and gradually this will be self supported by public sympathisers. I said in this connection Sri M.S. Aney Governor of Bihar and had along interview on the subject. Dr. Rajendra Prasad also has his good wishes for me. But I could not give the starting for financial difficulties, I want Rs 10,000/- to give it a starting.

The general programme of work will be as mentioned above in terms of medical treatment by the Sankirtan movement. There is a batch of selfless worker mostly Brahmacari & Sanyasi at my disposal with whom I can give it a starting but arrangement has to be made for training students & selfless young men to further interest of the work.

I am confident that many self-sacrificing young men will join us as soon as we begin the work. We have to work this scheme from village to village and town to town which we will have to develop by a gradual process.

There are lacs & lacs of temples all over India and these centres have to be utilized as local preaching centres. Members are to be recruited from all sections of people and I am sure when actual work is begun there will be no dearth of financial help. To begin with we can utilize the Gandhi Memorial centres all over the country for organizing this Sankirtan movement and if we do the work properly Government may recommend the Gandhi memorial fund for helping this movement.

I am already in negotiation with an American Federation and if proper work is done, such foreign federation will also help us. The thing is nowadays nobody is blind to any practical work. So as soon as people will find in it a practical utility, surely they will come & join with men & money.

I wish that you may recommend [Text Missing]this scheme of work to your government and the financial help may be awarded to the board of governors made according to the memorandum & articles of association and I shall work as the __ __ for the association throughout my life as ordered by my spiritual master Om Visnupada Sri Srimad Bhakti-Siddhanta Goswami Maharaja. [Text Missing]