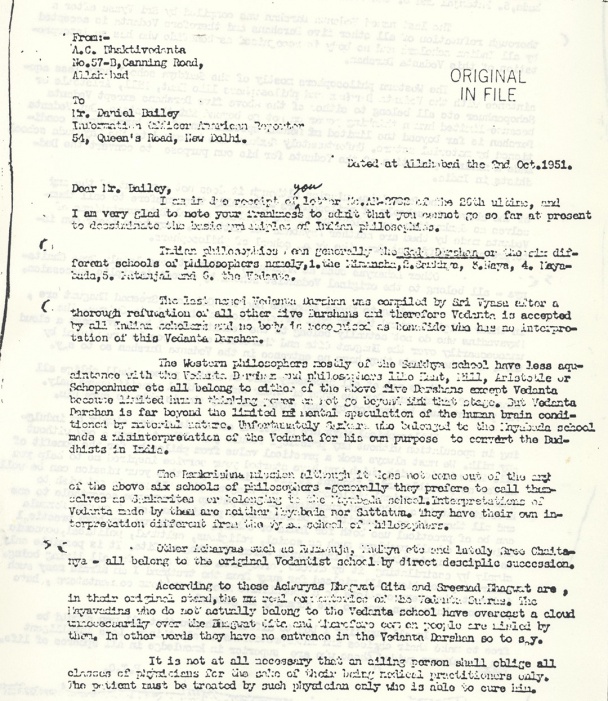 From:-
A.C. Bhaktivedanta
No. 57-B, Canning Road,
Allahabad

Dear Mr. Bailey,
I am in due receipt of your [handwritten] letter No. AR-2732 of the 26th ultimo, and I am very glad to note your frankness to admit that you cannot go so far at present to disseminate the basic principles of Indian philosophies.

The last named Vedanta Darshan was compiled by Sri Vyasa after a thorough refutation of all other five Darshans and therefore Vedanta is accepted by all Indian scholars and no body is recognized as bona fide who has no interpretation of this Vedanta Darshan.

The Western philosophers mostly of the Sankhya school have less aquaintance with the Vedanta Darshan and philosophers like Kant, Mill, Aristotle or Schopenhauer etc all belong to either of the above five Darshans except Vedanta because limited human thinking power cannot go beyond that stage. But Vedanta Darshan is far beyond the limited mental speculation of the human brain conditioned by material nature. Unfortunately Sankara who belonged to the Mayavada school made a misinterpretation of the Vedanta for his own purpose to convert the Buddhists in India.

The Ramakrishna mission although it does not come out of the above six schools of philosophers generally they prefer to call themselves as Sankarites or belonging to the Mayavada school. Interpretations of Vedanta made by them are neither Mayavada nor Sattatwa. They have their own interpretation different from the Vyasa school of philosophers.

Other Acharyas such as Ramanuja, Madhva etc and lately Sri Chaitanya - all belong to the original Vedantist school by direct disciplic succession.

According to these Acharyas Bhagawat Gita and Sreemad Bhagwat are, in their original stand, the real commentaries of the Vedanta Sutras. The Mayavadins who do not actually belong to the Vedanta school have overcast a cloud unnecessarily over the Bhagwat Gita and therefore common people are misled by them. In other words they have no entrance in the Vedanta Darshan so to say.

It is not at all necessary that an ailing person shall oblige all classes of physicians for the sake of their being medical practitioners only. The patient must be treated by such physician only who is able to cure him.

Philosophical ways are practical and it is no use simply by indulging in speculation without any practical result just like to keep a cow without any milk. We must always seek a practical value from philosophy for the benefit of all. The mission with which you have started your service inspired me to help you as far as possible and I thought it fit to inform you that your mission can be well guided by the practical philosophy of the Bhagwat Gita. If you do not wish to have it that is a different question. If you put up a programme acceptable to one and all there is no necessity of patronizing a particular ism. A common formula can be of practical use both for India or others. As such you can have practical solutions of all problems such as social, religious, cultural, political, economic as well as agricultural and industrial—from the Bhagwat-Gita. It is possible only simply by assimilating it by direct perception. It is meant for all living being. Indirect perception will mislead far away from the truth and I am afraid many such indirect misinterpretations in a speculative mood by various commentators, have done more harm than good to the humanity in general.

In all humility I beg to differ with you that all men should be free to make their choices and interpretations in all things. Less intelligent men are always guided by [handwritten] those who are superior in knowledge in all spheres of life. [Text missing] This principle is applicable everywhere but the guidance must be right and bona fide. But it depends always on the sweet will of the guided to accept this principle or reject it.

I am glad that you have a copy of Gita with you. Apart from the Swamijee's learned interpretations—you can see for yourself what is written in the 18th Chapter 67th sloka. Empiric philosophers may call it a sophistry but is a fact substantiated after all human reasoning offered by Arjuna. It is clearly said here that one should follow Sri Krishna alone. If any body makes his choice not to follow him surely he will have relative result.

Bhagavad-gita is mostly read by almost all classes of people of the world but unfortunately they are accepted in an independant choice of indirect interpretation. That is a deviation and for that reason only they cannot derive the direct benefit.

My sincere thanks are due to you for the last portion of your letter under reply.


All Glory to Sri Guru and Gauranga.