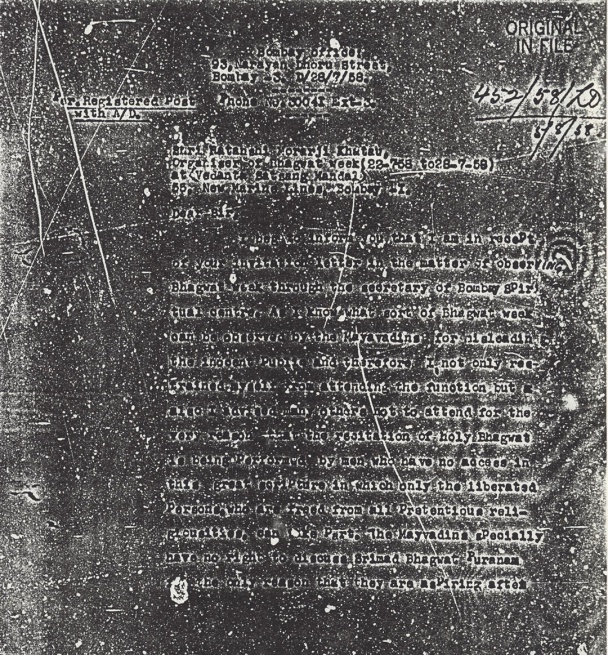 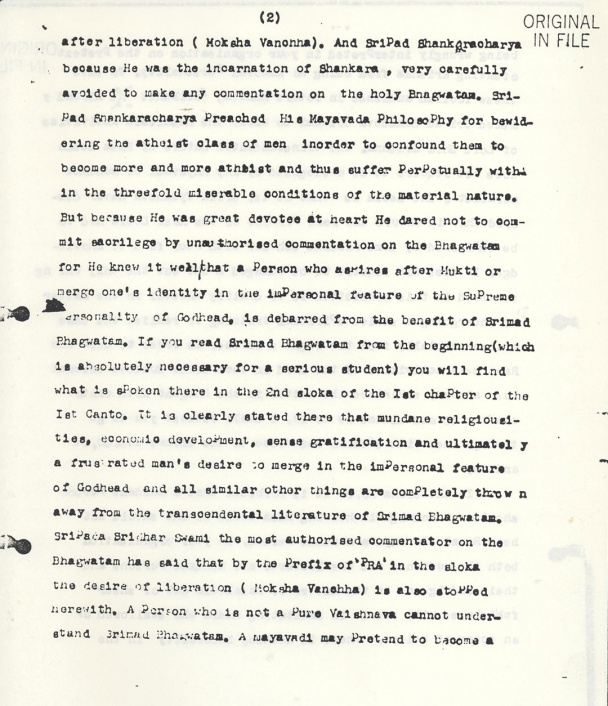 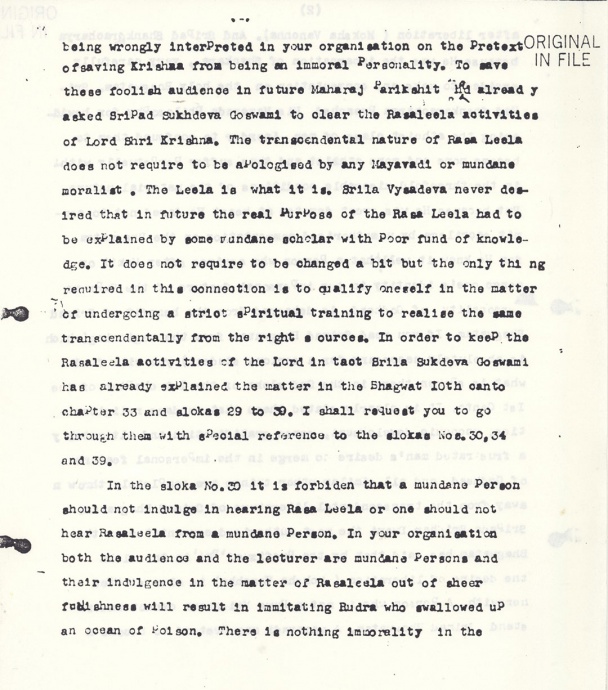 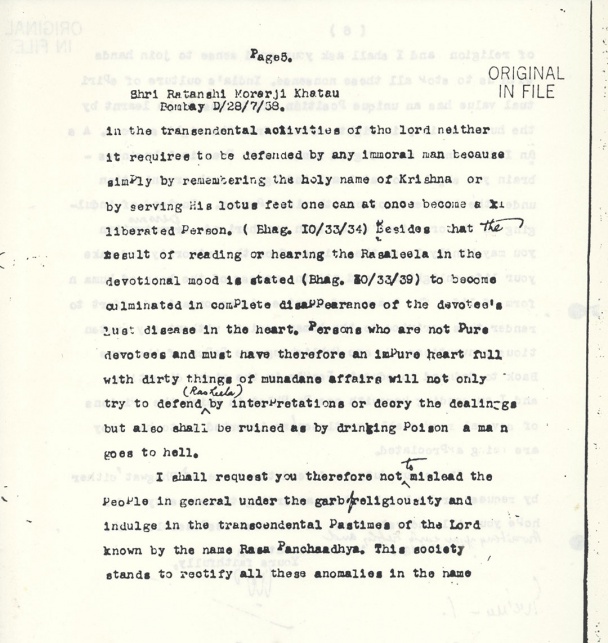 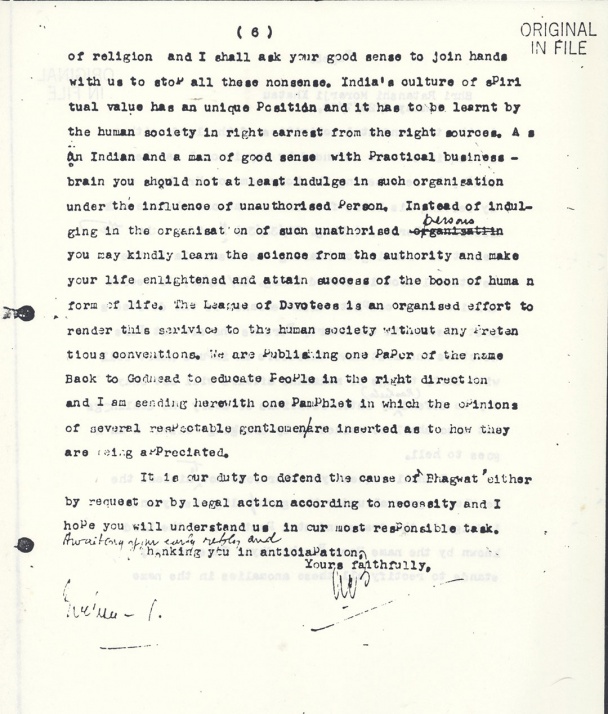 I beg to inform you that I am in reciept of your invitation letter in the matter of observing Bhagawat week through the secretary of Bombay spiritual centre. As I know what sort of Bhagavata week can be observed by the Mayavadins for misleading the innocent public and therefore I not only restrained myself from attending the function but also I advised many others not to attend for the very reason that the recitation of holy Bhagawat is being performed by men who have no access in this great scripture in which only the liberated persons, who are freed from all pretentious religiosities, can take part. The Mayavadins specially have no right to discuss Srimad Bhagawat Puranam for the only reason that they are aspiring after liberation (Moksha Vanohha). And Sripada Shankaracarya because He was the incarnation of Shankara, very carefully avoided to make any commentation on the holy Bhagwatam. Sripada Shankaracarya preached His Mayavada philosophy for bewildering the atheist class of men in order to confound them to become more and more atheist and thus suffer perpetually within the threefold miserable conditions of the material nature. But because He was great devotee at heart He dared not to commit sacrilege by unauthorized commentation on the Bhagwatam for He knew it well that a person who aspires after Mukti or merge one's identity in the impersonal feature of the Supreme Personality of Godhead, is debarred from the benefit of Srimad Bhagwatam. If you read Srimad Bhagwatam from the beginning (which is absolutely necessary for a serious student) you will find what is spoken there in the 2nd sloka of the 1st chapter of the 1st Canto. It is clearly stated there that mundane religiosities, economic development, sense gratification and ultimately a frustrated man's desire to merge in the impersonal feature of Godhead and all similar other things are completely thrown away from the transcendental literature of Srimad-Bhagwatam. Sripada Sridhara Swami the most authorized commentator on the Bhagwatam has said that by the prefix of "PRA" in the sloka the desire of liberation (Moksa Vanohha) is also stopped herewith. A person who is not a pure Vaisnava cannot understand Srimad Bhagwatam. A mayavadi may pretend to become a [so-called Vaisnava but because he cherishes at heart to merge into the Supreme, he is unable to develop the devotional cult which is a necessary qualification for understanding Srimad Bhagwatam. And to qualify the Mayavadis and other common men who indulge in the mental speculative transactions, Srimad Bhagwatam gives them instructions from the 1st to the 9th canto about the transcendental nature of the Supreme Personality of Godhead. Unfortunately the cheap and unscrupulous professional readers of the Bhagwata or the Mayavadi misleaders in the garb of a renouncer indulge in the highest topic of Srimad Bhagwatam described in the Rasa Panca Adhya. A person who is compact in mundane thought of material enjoyment will certainly be indulging in playing with poison if anyone, devoid of transcendental realization playfully deals with the transcendental pastimes of Lord Sri Krishna. Some friends who attended your Bhagwata week have told me how the pastimes of Lord Krishna was][text missing] being wrongly interpreted in your organization on the pretext of saving Krishna from being an immoral personality. To save these foolish audiences in future Maharaja Pariksit had already asked Sripad Sukdeva Goswami to clear the Rasaleela activities of Lord Shri Krishna. The transcendental nature of Rasa Leela does not require to be apologised by any Mayavadi or mundane moralist. The Leela is what it is. Srila Vyasadeva never desired that in future the real purpose of the Rasa Leela had to be explained by some mundane scholar with poor fund of knowledge. It does not require to be changed a bit but the only thing required in this connection is to qualify oneself in the matter of undergoing a strict spiritual training to realize the same transcendentally from the right sources. In order to keep the Rasaleela activities of the Lord intact Srila Sukdeva Goswami has already explained the matter in the Bhagwat 10th canto chapter 33 and slokas 29 to 39. I shall request you to go through them with special reference to the slokas No. 30, 34 and 39.

In the sloka No. 30 it is forbidden that a mundane person should not indulge in hearing Rasaleela or one should not hear Rasaleela from a mundane person. In your organization both the audience and the lecturer are mundane persons and their indulgence in the matter of Rasaleela out of sheer foolishness will result in imitating Rudra who swallowed up an ocean of poison. There is nothing immorality in the transcendental activities of the lord neither it requires to be defended by any immoral man because simply by remembering the holy name of Krishna or by serving His lotus feet one can at once become a liberated person. (Bhag. 10/33/34) Besides that the result of reading or hearing the Rasaleela in the devotional mood is stated (Bhag. 30/33/39) to become culminated in complete disappearance of the devotee's lust disease in the heart. Persons who are not pure devotees and must have therefore an impure heart full with dirty things of mundane affairs will not only try to defend Rasaleela[handwritten] by interpretations or decry the dealings but also shall be ruined as by drinking poison a man goes to hell.

I shall request you therefore not to[handwritten] mislead the people in general under the garb of religiosity and indulge in the transcendental pastimes of the Lord known by the name Rasa Panca Adhya. This society stands to rectify all these anomalies in the name of religion and I shall ask your good sense to join hands with us to stop all these nonsense. India's culture of spiritual value has an unique position and it has to be learnt by the human society in right earnest from the right sources. As an Indian and a man of good sense with practical business-brain you should not at least indulge in such organisation under the influence of unauthorised person. Instead of indulging in the organization of such unauthorised persons[handwritten] you may kindly learn the science from the authority and make your life enlightened and attain success of the boon of human form of life. The League of Devotees is an organized effort to render this service to the human society without any pretentious conventions. We are publishing one paper of the name Back to Godhead to educate people in the right direction and I am sending herewith one pamphlet in which the opinions of several respectable gentlemen are inserted as to how they are being appreciated.

It is our duty to defend the cause of "Bhagwat" either by request or by legal action according to necessity and I hope you will understand us in our most responsible task. [Awaiting your early reply and][handwritten] thanking you in anticipation,