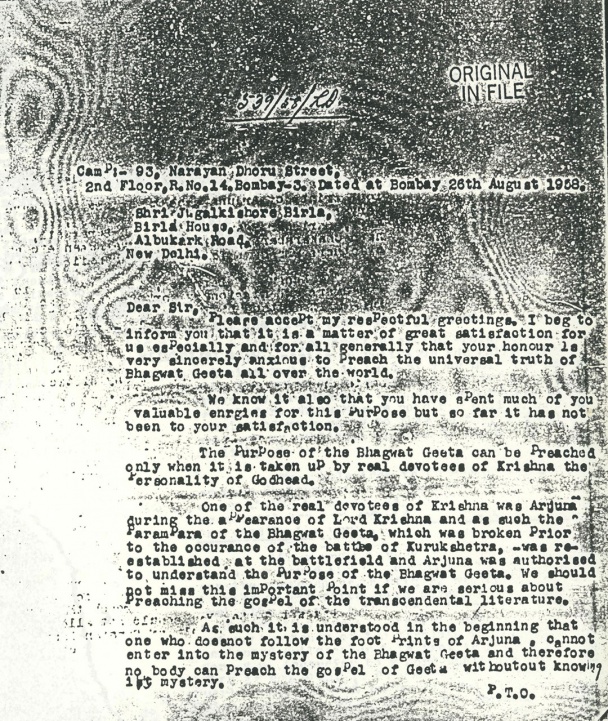 Letter to Jugalkishore Birla (Page 1 of 5) 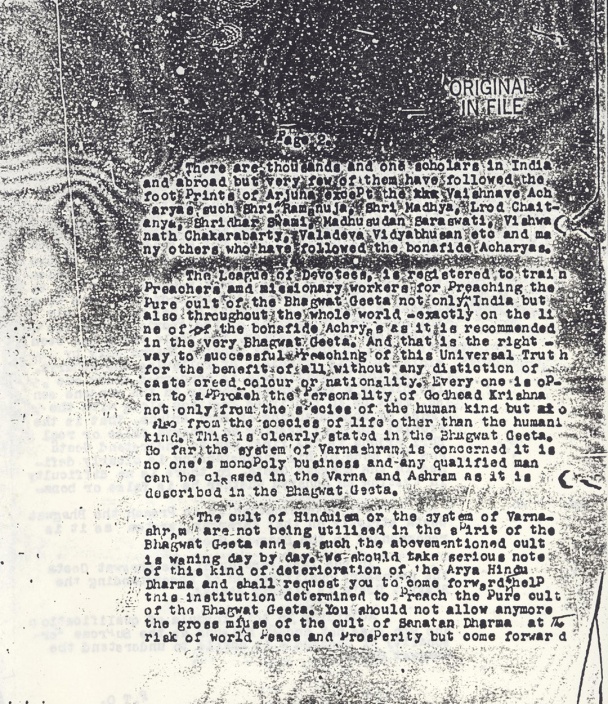 Letter to Jugalkishore Birla (Page 2 of 5) 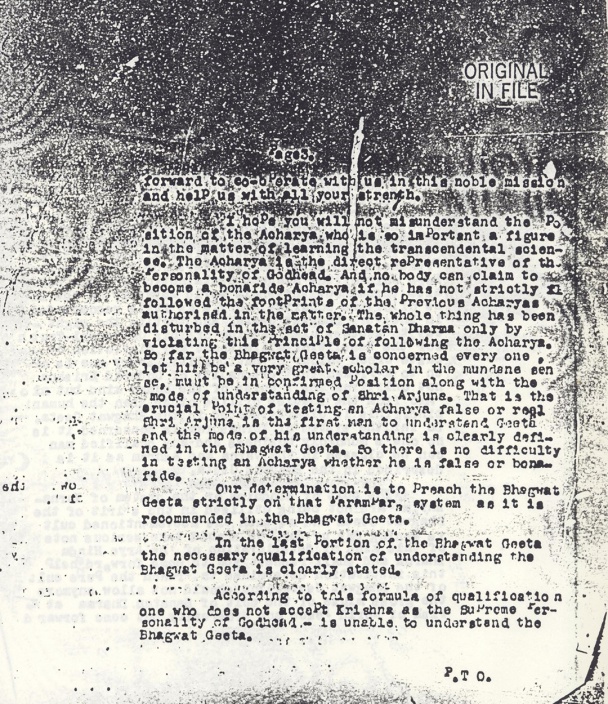 Letter to Jugalkishore Birla (Page 3 of 5) 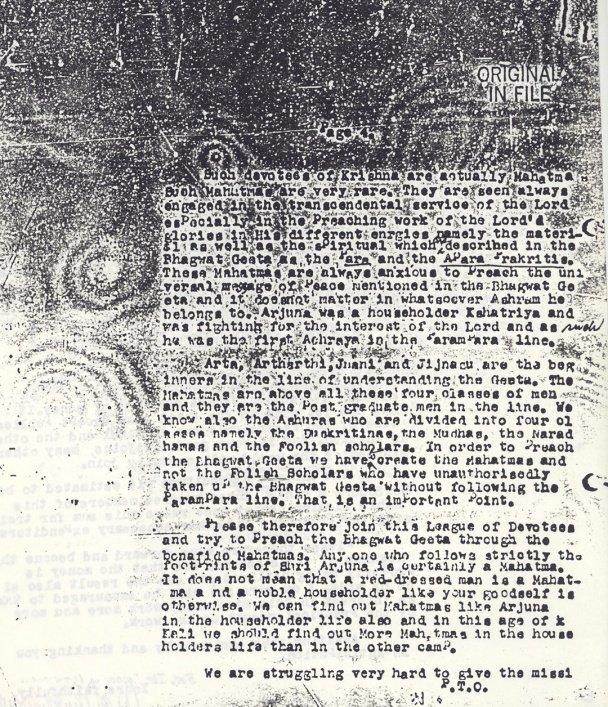 Letter to Jugalkishore Birla (Page 4 of 5) 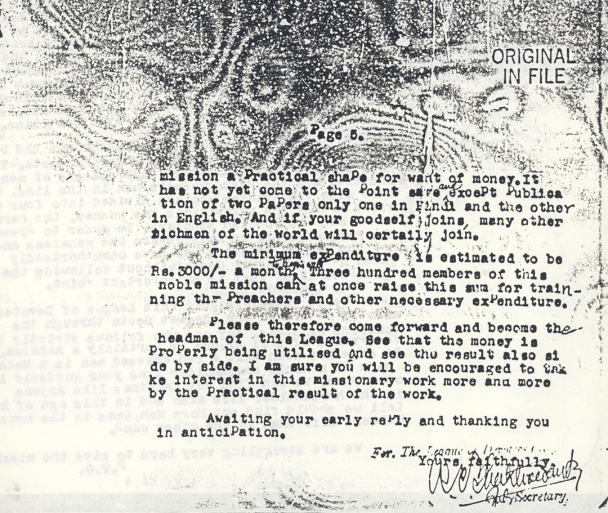 Letter to Jugalkishore Birla (Page 5 of 5)

Please accept my respectful greetings. I beg to inform you that it is a matter of great satisfaction for us especially and for all generally that your honour is very sincerely anxious to preach the universal truth of Bhagawad Geeta all over the world.

We know it also that you have spent much of your valuable energies for this purpose but so far it has not been to your satisfaction.

The purpose of the Bhagawat Geeta can be preached only when it is taken up by real devotees of Krishna the Personality of Godhead.

One of the real devotees of Krishna was Arjuna during the appearance of Lord Krishna and as such the parampara of the Bhagawat Geeta, which was broken prior to the occurrence of the battle of Kuruksetra, was reestablished at the battlefield and Arjuna was authorized to understand the purpose of the Bhagawat Geeta. We should not miss this important point if we are serious about preaching the gospel of the transcendental literature.

As such it is understood in the beginning that one who does not follow the foot prints of Arjuna, cannot enter into the mystery of the Bhagawat Geeta and therefore nobody can preach the gospel of Geeta without knowing its mystery.

There are thousands and one scholars in India and abroad but very few of them have followed the foot prints of Arjuna except the Vaisnava Acaryas such Shri Ramanuja, Sri Madhya, Lord Caitanya, Sridhara Swami, Madhusudana Sarasvati, Vishvanatha Cakravarti, Valadeva Vidyabhusana, etc. and many others who have followed the bona fide Acaryas.

The League of Devotees, is registered to train preachers and missionary workers for preaching the pure cult of the Bhagawat Geeta not only in[handwritten] India but also throughout the whole world—exactly on the line of the bona fide Acaryas as it is recommended in the very Bhagawat Geeta. And that is the right way to successful preaching of this Universal Truth for the benefit of all without any distinction of caste creed color or nationality. Every one is open to approach the Personality of Godhead Krishna not only from the species of the human kind but also from the species of life other than the human kind. This is clearly stated in the Bhagawat Geeta. So far the system of Varnasrama is concerned it is no one's monopoly business and any qualified man can be classed in the Varna and Ashram as it is described in the Bhagawat Geeta.

The cult of Hinduism or the system of Varnasrama are not being utilized in the spirit of the Bhagawat Geeta and as such the abovementioned cult is waning day by day. We should take serious note of this kind of deterioration of the Arya Hindu Dharma and shall request you to come forward to help this institution determined to preach the pure cult of the Bhagawat Geeta. You should not allow anymore the gross misuse of the cult of Sanatana Dharma at the risk of world peace and prosperity but come forward to co-operate with us in this noble mission and help us with all your strength.

I hope you will not misunderstand the position of the Acarya who is so important a figure in the matter of learning the transcendental science. The Acarya is the direct representative of the Personality of Godhead. And no body can claim to become a bona fide Acarya if he has not strictly followed the footprints of the previous Acaryas authorized in the matter. The whole thing has been disturbed in the set of Sanatana Dharma only by violating this principle of following the Acarya. So far the Bhagawat Geeta is concerned every one, let him be a very great scholar in the mundane sense, must be in confirmed position along with the mode of understanding of Shri Arjuna. That is the crucial point of testing an Acarya false or real Shri Arjuna is the first man to understand Geeta and the mode of his understanding is clearly defined in the Bhagawat Geeta. So there is no difficulty in testing an Acarya whether he is false or bona fide.

According to this formula of qualification one who does not accept Krishna as the Supreme Personality of Godhead—is unable to understand the Bhagawat Geeta.

Such devotees of Krishna are actually Mahatma. Such Mahatmas are very rare. They are seen always engaged in the transcendental service of the Lord especially in the preaching work of the Lord's glories in His different energies namely the material as well as the spiritual which are[handwritten] described in the Bhagawat Geeta as the Para and the Apara Prakrtis. These Mahatmas are always anxious to preach the universal message of peace mentioned in the Bhagawat Geeta and it does not matter in whatsoever Ashram he belongs to. Arjuna was a householder Ksatriya and was fighting for the interest of the Lord and as such[handwritten] he was the first Acarya in the parampara line.

Arta, Artharthi, Jnani and Jijnasu are the beginners in the line of understanding the Geeta. The Mahatmas are above all these four classes of men and they are the post graduate men in the line. We know also the Ashuras who are divided into four classes namely the Duskritinas, the Mudhas, the Naradhamas and the Foolish scholars. In order to preach the Bhagawat Geeta we have to[handwritten] create the Mahatmas and not the Foolish Scholars who have unauthorizedly taken up the Bhagawat Geeta without following the parampara line. That is an important point.

Please therefore join this League of Devotees and try to preach the Bhagawat Geeta through the bona fide Mahatmas. Any one who follows strictly the footprints of Shri Arjuna is certainly a Mahatma. It does not mean that a red-dressed man is a Mahatma and a noble householder like your good self is otherwise. We can find out Mahatmas like Arjuna in the householder life also and in this age of Kali we should find out More Mahatmas in the householders life than in the other camp.

We are struggling very hard to give the mission a practical shape for want of money. It has not yet come to the point save and[handwritten] except publication of two papers only one in Hindi and the other in English. And if your good self joins, many other richmen of the world will certainly join.

The minimum expenditure is estimated to be Rs. 3000/- a month (to begin with.)[handwritten] Three hundred members of this noble mission can at once raise this sum for training the preachers and other necessary expenditure.

Please therefore come forward and become the headman of this League. See that the money is properly being utilized and see the result also side by side. I am sure you will be encouraged to take interest in this missionary work more and more by the practical result of the work.

Awaiting your early reply and thanking you in anticipation.

For the League of Devotees,
Yours faithfully,
signed[A.C. Bhaktivedanta]
Founder Secretary.