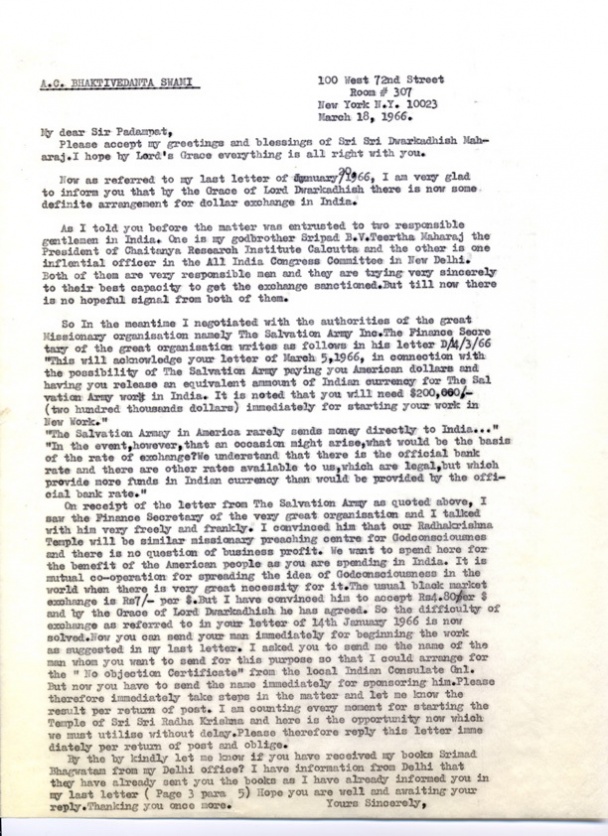 Now as referred to my last letter of January 20 1966 [handwritten], I am very glad to inform you that by the Grace of Lord Dwarkadhish there is now some definite arrangement for dollar exchange in India.

As I told you before the matter was entrusted to two responsible gentlemen in India. One is my godbrother Sripad B.V. Teertha Maharaj the President of Chaitanya Research Institute Calcutta and the other is one influential officer in the All India Congress Committee in New Delhi. Both of them are very responsible men and they are trying very sincerely to their best capacity to get the exchange sanctioned. But till now there is no hopeful signal from both of them.

So In the meantime I negotiated with the authorities of the great Missionary organization namely The Salvation Army Inc. The Finance Secretary of the great organization writes as follows in his letter D/14/3/66 "This will acknowledge your letter of March 5,1966, in connection with the possibility of The Salvation Army paying you American dollars and having you release an equivalent amount of Indian currency for The Salvation Army work in India. It is noted that you will need $200,000/- (two hundred thousands dollars) immediately for starting your work in New York."
"The Salvation Army in America rarely sends money directly to India..." "In the event, however, that an occasion might arise, what would be the basis of the rate of exchange? We understand that there is the official bank rate and there are other rates available to us, which are legal, but which provide more funds in Indian currency that would be provided by the official bank rate."
On receipt of the letter from The Salvation Army as quoted above, I saw the Finance Secretary of the very great organisation and I talked with him very freely and frankly. I convinced him that our Radhakrishna Temple will be similar missionary preaching centre for God consciousness and there is no question of business profit. We want to spend here for the benefit of the American people as you are spending in India. It is mutual co-operation for spreading the idea of God consciousness in the world when there is very great necessity for it. The usual black market exchange is Rs 7/- per $. But I have convinced him to accept Rs 4.80/ per $ and by the Grace of Lord Dwarkadhish he has agreed. So the difficulty of exchange as referred to in your letter of 14th January 1966 is now solved. Now you can send your man immediately for beginning the work as suggested in my last letter. I asked you to send me the name of the man whom you want to send for this purpose so that I could arrange for the "No objection Certificate" from the local Indian Consulate Gnl. But now you have to send the name immediately for sponsoring him. Please therefore immediately take steps in the matter and let me know the result per return of post. I am counting every moment for starting the Temple of Sri Sri Radha Krishna and here is the opportunity now which we must utilise without delay. Please therefore reply this letter immediately per return of post and oblige.
By the by kindly let me know if you have received my books Srimad Bhagwatam from my Delhi office? I have information from Delhi that they have already sent you the books as I have already informed you in my last letter (Page 3 para 5).Hope you are well and awaiting your reply. Thanking you once more.
Yours Sincerely,