660430 - Letter to Reserve Bank of India written from New York 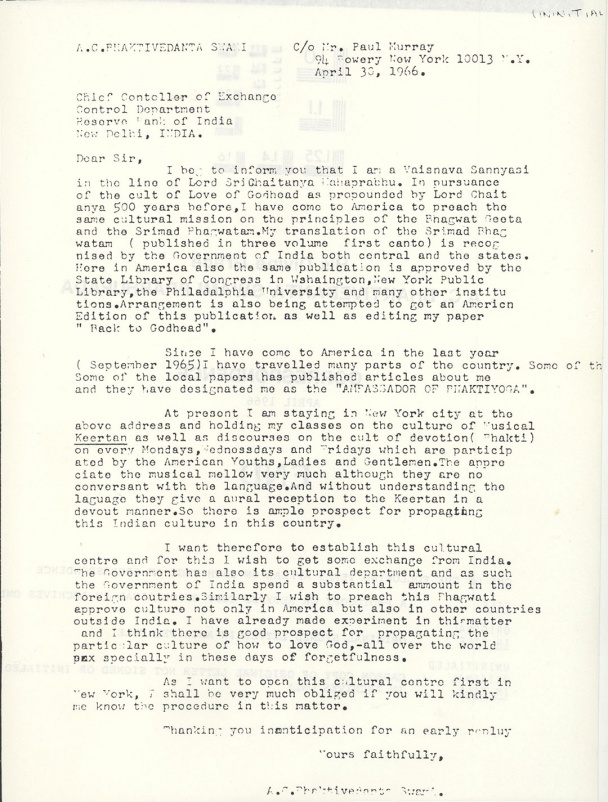 Letter to Reserve Bank of India

Dear Sir,
I beg to inform you that I am a Vaisnava Sannyasi in the line of Lord Sri Chaitanya Mahaprabhu. In pursuance of the cult of Love of Godhead as propounded by Lord Chaitanya 500 years before, I have come to America to preach the same cultural mission on the principles of the Bhagwat Geeta and the Srimad Bhagwatam. My translation of the Srimad Bhagwatam (published in three volume first canto) is recognized by the Government of India both central and the states. Here in America also the same publication is approved by the State Library of Congress in Washington, New York Public Library, the Philadalphia University and many other institutions. Arrangement is also being attempted to get an American Edition of this publication as well as editing my paper "Back to Godhead".

Since I have come to America in the last year (September 1965) I have travelled many parts of the country. Some of the local papers has published articles about me and they have designated me as the "AMBASSADOR OF BHAKTIYOGA".

At present I am staying in New York city at the above address and holding my classes on the culture of musical keertan as well as discourses on the cult of devotion (Bhakti) on every Mondays, Wednesdays and Fridays which are participated by the American Youths, Ladies and Gentlemen. They appreciate the musical mellow very much although they are no conversant with the language. And without understanding the language they give a aural reception to the keertan in a devout manner. So there is ample prospect for propagating this Indian culture in this country.

I want therefore to establish this cultural centre and for this I wish to get some exchange from India. The Government has also its cultural department and as such the Government of India spend a substantial amount in the foreign countries. Similarly I wish to preach this Bhagwati approve culture not only in America but also in other countries outside India. I have already made experiment in this matter and I think there is good prospect for propagating the particular culture of how to love God,-all over the world specially in these days of forgetfulness.

As I want to open this cultural centre first in New York, I shall be very much obliged if you will kindly me know the procedure in this matter.

Thanking you in anticipation for an early reply