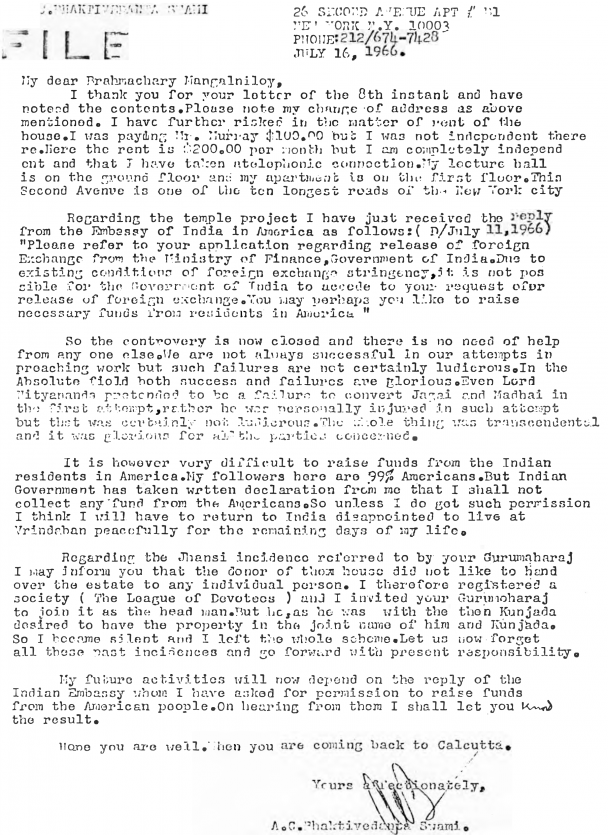 My dear Brahmachary Mangalniloy,
I thank you for your letter of the 8th instant and have noted the contents. Please note my change of address as above mentioned. I have further risked in the matter of rent of the house. I was paying Mr. Murray $100.00 but I was not independent there. Here the rent is $200.00 per month but I am completely independent and that I have taken a telephonic connection. My lecture hall is on the ground floor and my apartment is on the first floor. This Second Avenue is one of the ten longest roads of the New York city.

Regarding the temple project I have just received the reply from the Embassy of India in America as follows: (D/July 11, 1966) "Please refer to your application regarding release of foreign Exchange from the Ministry of Finance, Government of India. Due to existing conditions of foreign exchange stringency, it is not possible for the Government of India to accede to your request for release of foreign exchange. You may perhaps you like to raise necessary funds from residents in America ".

So the controversy is now closed and there is no need of help from any one else. We are not always successful in our attempts in preaching work but such failures are not certainly ludicrous. In the Absolute field both success and failures are glorious. Even Lord Nityananda pretended to be a failure to convert Jagai and Madhai in the first attempt, rather he was personally injured in such attempt but that was certainly not ludicrous. The whole thing was transcendental and it was glorious for all the parties concerned.

It is however very difficult to raise funds from the Indian residents in America. My followers here are 99% Americans. But Indian Government has taken written declaration from me that I shall not collect any fund from the Americans. So unless I do get such permission I think I will have to return to India disappointed to live at Vrindaban peacefully for the remaining days of my life.

Regarding the Jhansi incidence referred to by your Gurumaharaj I may inform you that the donor of the house did not like to hand over the estate to any individual person. I therefore registered a society (The League of Devotees) and I invited your Gurumaharaj to join it as the head man. But he, as he was with the then Kunjada desired to have the property in the joint name of him and Kunjada. So I became silent and I left the whole scheme. Let us now forget all these past incidences and go forward with present responsibility.

My future activities will now depend on the reply of the Indian Embassy whom I have asked for permission to raise funds from the American people. On hearing from them I shall let you know [handwritten] the result.

Hope you are well. When you are coming back to Calcutta?