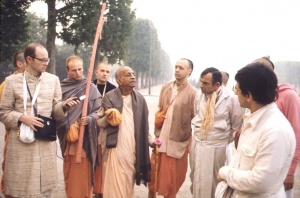 Just like īśvaraḥ sarva-bhūtānāṁ hṛd-deśe 'rjuna tiṣṭhati (BG 18.61): "Īśvara, the Supreme Lord, is situated in everyone's heart." So He is in the heart of a hog, of a dog, and the learned brāhmaṇa as well. For Him there is no such discrimination what is hog, what is dog, what is brāhmaṇa, what is good, what is bad, because He is Absolute. But here we have to distinguish between the hog and the dog, at least so far the material body is concerned.

He is addressing Sanātana Gosvāmī. You'll remember that this chapter, "Instruction to Sanātana Gosvāmī," was begun when Sanātana Gosvāmī, after his retirement, approached the Lord at Benares and surrendered himself and asked Him, "What I am?" So under that question, He is describing his relationship with Kṛṣṇa. Kṛṣṇa.

The jīvātmā, the living entity, is eternally servitor of Kṛṣṇa, and one should understand the nature of his master so that his service attitude, his affection, may be more intimate. Suppose I am serving at a place. I am engaged in a service to a master, but I do not know how big is my master. But when I understand the influence and opulence and greatness of my master—I become more devoted, "Oh, my master is so great." So therefore simply knowing, "God is great, and I have got some relationship with God," that is not sufficient. You must know how much great He is. Of course, you cannot calculate, but as far as possible, you should know how great He is.

So Kṛṣṇa is Absolute. That is the first understanding, that there is no duality. Kṛṣṇa, His name, His fame, His pastime, His quality, His association, associates—everything is one. One plus one equal to one, always remember. There is no difference between Kṛṣṇa and Kṛṣṇa's name. That is Absolute. We have got here experience that the thing and the name of the thing, they are different, dual. Suppose here is a glass of water. I am thirsty. I want glass of water. But if I say: "Water, water, water, water," oh, that will not quench my thirst. I must have the thing, water, and then it will be acting.

So this is called advaya-jñāna. Similarly, when we read Bhagavad-gītā, that is also Kṛṣṇa. Therefore we should pay respect. When we enter into the temple of Kṛṣṇa, it should be understood that we are in touch with Kṛṣṇa. Everything in relationship is Kṛṣṇa. That is the highest . . . therefore the devotees who are in the higher conception of Kṛṣṇa consciousness sees nothing before him save and except Kṛṣṇa. That is not to be imitated, but the stage, in the higher stage, the devotee sees nothing but Kṛṣṇa. Sarvatra sphūraya tāṅra iṣṭa-deva mūrti (CC Madhya 8.274).

Everything is relationship Kṛṣṇa. Matter is energy of Kṛṣṇa. Therefore energy and the energetic, not being different, so even in the material world he sees Kṛṣṇa. So for him, there is no matter—everything spiritual. Advaya-jñāna. There is no matter at all. Just like in Kṛṣṇa, he has no distinction what is matter, what is spirit, but in our conditioned stage we have got "superior," "inferior" conception. But when we are also in the higher stage of the Absolute Truth, brahma-bhūtaḥ prasannātmā na śocati na kāṅkṣati (BG 18.51), when we are actually in devotional . . . such pure devotional service in Kṛṣṇa, then we will see that everything is Kṛṣṇa.

Lord Caitanya says, kṛṣṇa advaya-jñāna-tattva. He is Absolute Truth. Vraje vrajendra-nandana. And the abode which is called Kṛṣṇaloka, Vṛndāvana. . . He is just like the boy of. . . Vrajendra-nandana. He has got His devotee as father and mother. He is just like a boy, sixteen-years-old boy, Vrajendra-nandana. That is the real feature of Kṛṣṇa. He is not . . . you will never find Kṛṣṇa as very old man. No. Kṛṣṇa's real feature of body, trans . . . not this body, His transcendental body, sac-cid-ānanda-vigrahaḥ (Bs 5.1).

With a flute in the hand, He look just like a fresh sixteen-years-old boy, always freshness. Kiśora. Kiśora means, kiśora age is from ten years to sixteen years. And after sixteenth year, one begins his youth.

In the Brahma-saṁhitā you will find description of Kṛṣṇa, advaita acyuta . . . advaita means absolute; acyuta means nonfallible, Brahman. He is Parambrahman. We are also Brahman, but we have fallen down. We have fallen down in this material condition. But Kṛṣṇa never falls down in material condition. When He appears before us, don't think that, "He is also fallen soul like me." The fools consider like that. Avajānanti māṁ mūḍhā (BG 9.11).

Mūḍhā means fools. The fool consider Kṛṣṇa as ordinary man. Mānuṣīṁ paraṁ bhāvam ajānantaḥ. The fools do not know what is immense potency, background, of Kṛṣṇa. Therefore they think Kṛṣṇa as like one of us. So here it is said that sarva-ādi. Sarva-ādi means the primal. Primal. And sarva-aṁśī. Sarva-aṁśī means He is the original thing, and everything is part. We are also part and parcel of Kṛṣṇa. Mamaivāṁśa, in the Bhagavad-gītā. Aṁśī. Aṁśī and aṁśa. Just like this hand, it is called part, and I am, as whole body, I am the whole. So we can understand part and whole. So therefore He is whole, and everything is His part. He is the aṁśī; He is the whole. Sarva-aṁśī.

Just mark this description of Kṛṣṇa: cid-ānanda-deha. Cid-ānanda-deha means transcendental, spiritual body, not this body. Because the less intelligent person, they cannot think of personal God, because they think that whenever there is question of personality, it is material body. They cannot find out the shape of the spirit soul. It is so small that from material eyes, by material instrument, you cannot find out the shape of the soul. Therefore they conclude that there is no shape.

The same example: just geometrically, the definition of point is given, "point has no length, no breadth," because a point cannot be measured by any human instrument. But nothing can be without . . . even the atom has got its measure. But because we have no power to measure, we set aside, dismiss: "Oh, there is no . . . nothing." So similarly, "Because we do not know what is spirit, and we think spirit is something just opposite to this matter, and matter we find manifestation, form, therefore spirit should be formless." That is their conclusion.

Sarvāśraya sarveśvara. Sarveśvara means the Supreme Lord. This is very nicely explained by Lord Caitanya. Sarva-ādi: "He is the origin of everything." Sarva-aṁśī: "He is the whole of all the parts. And He is just like a fresh boy. His body is transcendental, spiritual, full of bliss." Sarvāśraya: "And He is the rest of everything, and He is the Supreme Lord." This is the description of Kṛṣṇa.

So as we have seen that Lord Caitanya, when He instructs, He gives at once evidence from authoritative scripture. That is the way of presenting. Always you should remember that we cannot imagine about God: "I think God is like this." This is nonsense. You have no thinking power. You are under the grip of material nature. He is pulling. The material nature is pulling you by the ear, just like this. Prakṛteḥ kriyamāṇāni guṇaiḥ karmāṇi sarvaśaḥ (BG 3.27).

You are being acted, influenced. Just like the same example: You are thrown in the Atlantic Ocean, you have no power. By the waves you will have to work. The waves are tossing this way and that way. You are simply struggling. That's all. So how we can think independently within the tossing of Atlantic Ocean? This is all nonsense.

So how He becomes parama, the Supreme? Because He is sac-cid-ānanda-vigrahaḥ. His body is spiritual, full of bliss and eternal. Therefore He is Supreme Lord. Anādi. So we have got experience that everything has got its cause. Suppose I am lord. But I have got some cause to become lord. Either my father was lord or I have accumulated some wealth, the government has recognized me as lord . . . under certain condition, I have become lord. But He is ādi. Ādi means He is the origin. There is nothing beyond Him; therefore ādi. Ādi, anādi.

Anādir ādiḥ. Everything has got a cause, but He has no cause. He is Lord, but there is no cause how He has become Lord. When I am lord, there is cause. I cannot become . . . perhaps you know that in England, if somebody becomes very rich, he has to deposit some amount of money to the government, then government will award him the title "lord." And with that huge amount of money his family will be maintained, and the first son of the lord family, he will be declared as lord. In this way. So far I have heard. I do not know exactly. But this lord is made, recognized, by the government on deposition of some certain amount of money. The government recognizes, "Yes, this family may be recognized as lord family." They create. In England they create aristocracy. Similarly, when they were in India, they also created many aristocracies. So Kṛṣṇa is not a created, aristocratic lord. That we should know. Anādir ādir govindaḥ (Bs 5.1).

And He is playing just like cowherd boy, sixteen-year-boy and playing with cows. His father has got many cows, and He goes to the cows, pleasure trip with friends. That is Kṛṣṇa's business. He is not going to any office or any factory. You see? So goṣṭha. He goes, and His mother gives Him sufficient to eat. And after eating His breakfast, with His friends and His flute and cows He goes outside for pleasure trip. That is Kṛṣṇa's business. Therefore He is Govinda.

The cows, oh, as soon as they see Kṛṣṇa, they become . . . they lick up His feet and body, and every cow has got a different name. As soon as He will call, the cow will come immediately, and dropping milk. And those cows are also spiritual. Surabhī. It is described in the Brahma-saṁhitā, surabhīr abhipālayantam (Bs 5.29).

Surabhī. Surabhī cow means nonexhaustive. You can milk as much milk you want and as many times. In the material world the cow is limited. There is time that you can milk, morning and evening, and so much quantity, not more than that. But surabhīr means you can milk those cows anytime you like, and you can draw milk as many as you like, as much as you like. This is called surabhī. Surabhīr . . . in the description of Brahma-saṁhitā: cintāmaṇi-prakara-sadmasu kalpa-vṛkṣa-lakṣāvṛteṣu surabhīr abhipālayantam. Surabhīr abhipālayantam. So therefore He is Govinda. He gives . . . He is pleasure for everyone.

So He is Govinda and sarva-kāraṇa-kāraṇam (Bs 5.1), the cause of all causes. Beyond Him, there is no other cause. This is the description Lord Caitanya gives, and we shall gradually discuss other points.