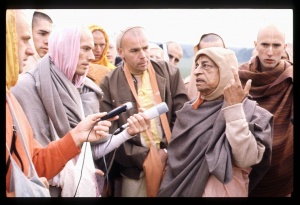 So these incarnations are manifested at different times according to the need. Just like in the Bhagavad-gītā it is stated:

Foolish creatures, they think that everything has come out of nothing, and it is being managed by nature. No. Behind nature there is God. In the Bhagavad-gītā you have learned, mayādhyakṣeṇa prakṛtiḥ sūyate sa-carācaram (BG 9.10): "Under My superintendence the material nature is working." Material nature is not blind. Just like foolish person, because he cannot see President Johnson and the governmental personalities, they think, "It is going on. Nobody is there behind this government, and it is going on."

So similarly, persons who have no knowledge in the affairs of this material world, they think that, "This material nature is working, and automatically, by magic, the sun is coming out, the moon is coming out, and the season is changing, and everything is going on just like magic, and we are the master of everything." Never think . . . these foolish persons never think that they are not masters, they are servant, servant of the material nature. So that is their foolishness.

Therefore, when there is too much foolishness, so there is need of avatāra, incarnation, to correct. Yadā yadā hi dharmasya glānir bhavati. Whenever there is, I mean to say, discrepancies in the maintenance of law and order of this material nature, there is need of avatāra, incarnation. Because it is God's kingdom, it is also secondary kingdom—real kingdom in the spiritual world—so God comes in different avatāra.

And when the material world is created, the first avatāra is puruṣa-avatāra. The Mahā-Viṣṇu, Garbhodakaśāyī, They create. And then līlāvatāra. Līlāvatāra, under some particular circumstances, to save some particular devotee or to display some particular feature . . . just like Lord Rāma, He incarnated. He is līlāvatāra. Then guṇāvatāra. For maintenance of this material world there are different kinds of modes of nature, and to control those modes of nature there are avatāra: Brahmā, Viṣṇu, Maheśvara. Līlāvatāra. Then manvantarāvatāra. The changes of millenniums, that manvantarāvatāra. And then yugāvatāras, yugāvatāra, in each and every yuga. Just like this Kali-yuga. This is called Kali-yuga. In the Kali-yuga the incarnation is Lord Caitanya.

It is stated in the Śrīmad-Bhāgavatam . . . there is a chapter. Nava-yogendra, nine great mystics, met one very powerful king, and they explained, each and every one of them, they explained about spiritual things. And there was a transcendentalist amongst them. Amongst the nine personalities, there was one whose name was Camasa Muni. The Camasa Muni said . . . that is explained in the Śrīmad-Bhāgavatam. When he was asked by Viveha Mahārāja, the king Viveha, "What is the avatāra of this Kali-yuga, especial?" then he mentioned:

"Now, in this age of Kali-yuga, there will be avatāra, incarnation, who is Kṛṣṇa, but His color of the body is not black." That is Lord Caitanya.

Lord Caitanya was very fair complexion, nice-looking. So kṛṣṇa-varṇaṁ tviṣā. Tviṣā, by complexion, He is not Kṛṣṇa, but He is Kṛṣṇa. Kṛṣṇa-varṇam tviṣākṛṣṇam and sāṅgo 'pāṅgāstra-pārṣadam. And He is associated by His confidential, I mean to say, devotees. You'll find Lord Caitanya always crowded by His devotees. Always. His dancing mode—you have seen the picture. Special associates, that Advaita, Gadādhara, Nityānanda. So that incarnation, who is Kṛṣṇa, but His color, His complexion, is not black, but He is associated with devotees . . . and the process of worshiping that incarnation is to chant Hare Kṛṣṇa, Hare Kṛṣṇa, Kṛṣṇa Kṛṣṇa, Hare Hare.

"In this Kali-yuga, in this age, this incarnation of name—Hare Kṛṣṇa, Hare Kṛṣṇa, Kṛṣṇa Kṛṣṇa, Hare Hare—to give facility to the conditioned soul." They cannot do anything. It is very difficult to perform any other religious rituals. This, the best anywhere, everywhere—you can chant Hare Kṛṣṇa, Hare Kṛṣṇa. Nāmnām akāri bahudhā nija-sarva-śaktih (CC Antya 20.16).

And when Kṛṣṇa personally comes, His . . . He can be seen in two features, bālya, paugaṇḍa: His childhood and boyhood, up to sixteenth year. That is the real feature of Kṛṣṇa, kiśora. And further features, that is expansion of Kṛṣṇa, Vāsudeva. Vāsudevaḥ sarvam iti (BG 7.19).

Now, the first avatāra, first incarnation, is the puruṣāvatāra. He divides Himself into three. This is stated in the Viṣṇu Purāṇa:

Anyone who understands about the appearance and disappearance of God or His incarnation, simply by understanding this, one is liberated. And that person who understands, after quitting this material body, no more he comes here, but he goes back to Godhead to become one of His associates. Such persons who knows about the incarnations, they are not impersonalist. Therefore they do not merge in the impersonal Brahman feature, but they go to the different spiritual planets.

Everything requires ingredient. So the, I mean to say, original ingredients, the, what is called, subtle ingredients, they were created first by this Mahā-Viṣṇu. Then, from those ingredients, universes were produced. And each universe, ekaṁ tu mahataḥ dvitīyaṁ tv aṇḍa-saṁsthitam. The first puruṣāvatāra, Mahā-Viṣṇu, creates the ingredients, and the second Mahā-Viṣṇu enters in each and every universe. He is called dvitīya. And tṛtīyaṁ sarva-bhūta-stham: "And the third, He enters into the body of all living entities, Paramātmā, or the Supersoul." This is the division of three first incarnation.

Svābhāvikī jñāna-bala-kriyā ca. Just like one potency is working, producing flowers. Producing flowers. We are seeing that a flower is being produced automatically, so nicely painted, so nicely colored. But because we are fools, therefore we think it is being produced automatically. No. It is produced by the kriyā-śakti, by the active potency of God, kriyā-śakti. Jñāna-śakti: and there is such perfect knowledge that nobody can see any defect.

You see a butterfly, how it is nicely painted. You just see duplicate in both the wings. Just like an artist paint nicely, it is painted. So we think it is coming out of nothing. This is our foolishness. Here is, that it is coming out of the jñāna-śakti. But His jñāna is so wide that simply by His desire, simply by His will, it can be executed. These are the things to be studied. Because we cannot see something before our eyes, that does not mean there is no existence. There is existence, but we do not know how one is working. How one is working. Svābhāvikī jñāna-bala-kriyā ca. Svābhāvikī jñāna-bala-kriyā.

Just like you see the physiolo . . . anatomical condition of your body. Now, how this body is produced, how nicely, that every mechanical arrangement, the . . . (indistinct) . . . and the . . . just like a big factory and big office. The brain is the office and stomach is the factory, and it is creating energy, it is coming to the heart and another place . . . just like soap factory. Sometimes, in some place, it is being . . . some part of the manufacture is finished, another . . . in this way it is going on. But it is coming out a small pea. And how it is developing. In everything you can see. You take a seed, how it develops, a great tree. How much potency is there.

So svābhāvikī jñāna-bala-kriyā ca. Everything is being done. I do not know. I claim, "It is my body," but I do not know how even a hair is growing. I do not know how it is replaced. I cut in the morning, and the next day I see again there is. So these things are going on. Svābhāvikī jñāna-bala-kriyā ca. We have to study God's activity in this way, so many things, nature's study. So those who are intelligent, they can see that these things are working. What is that? Icchā-śakti, kriyā-śakti, jñāna-śakti, these three potencies of God, Kṛṣṇa, is working.

Icchā-jñāna vinā nā haya sṛjana. Without desire and without knowledge, nothing can be created. Nothing. Suppose we are manufacturing so many things. Now, the manufacturer is first of all thinking, willing, that "This sort of thing, if we manufacture, it will be very nicely sold in the market." That is icchā-śakti. Then he acts, acts on it. That is called jñāna-śakti. Without jñāna, without willing, nothing is produced. So whenever you find something produced, you must know behind that production there is that will, the supreme will, the supreme knowledge. This is study. Icchā-śakti-jñāna . . .

And the potency of activity, that is being done by the expansion of Saṅkarṣaṇa, either in this material world or in the spiritual world. So parāsya śaktir vividhaiva śrūyate (Śvetāśvatara Upaniṣad 6.8).

In this way the Lord is working in so many ways, and because we have no knowledge, we think that "There is no brain behind it. There is no knowledge behind it. Everything is coming out automatically, and we are the master of everything." That is called illusion. So by Kṛṣṇa consciousness, you will be free from this illusion, and you will know how God is working by His different potential power.