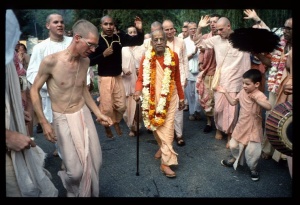 Kṛṣṇa's first expansion, second expansion, the third expansion. The third expansion, Mahā-Viṣṇu. So Mahā-Viṣṇu's potency is described in the Brahma-saṁhitā: yasyaika-niśvasita-kālam athāvalambya. Niśvasita-kāla means the breathing period. Just abiding by the breathing period of that Mahā-Viṣṇu, jīvanti loma-vilajā jagad-aṇḍa-nāthāḥ. Jagad-aṇḍa-nāthāḥ means this . . . the supreme creature, created, supreme created creature, Brahmā. Brahmā is the principal supreme creature in each, every universe. There are innumerable universes, and there are innumerable Brahmās also.

You will find in Caitanya-caritāmṛta, it is quoted from Śrīmad-Bhāgavatam that one sometimes . . . it is called līlā, pastime, that Brahmā, when Kṛṣṇa was here on this planet, so Brahmā was very much proud that "Kṛṣṇa is now in the earthly planet, and this earthly planet is one of the innumerable planets under my control." Brahmā is the controller, is the primal, principal living entity in this universe, so he was little proud that "Kṛṣṇa is within my control."

So therefore Kṛṣṇa, because He is Paramātmā, He knows everything, what one thinks, what one does. So He, Kṛṣṇa, asked Brahmā to come and see Him. So Brahmā came. Brahmā came. His doorman informed Kṛṣṇa that . . . time doorman asked Brahmā, "Who are you, please?" "Now, you say Kṛṣṇa that I am Brahmā. I have come to see Him." So when the doorman informed Kṛṣṇa that—in Dvārakā, when Kṛṣṇa was there as king—so Kṛṣṇa asked, "Oh, which Brahmā? Which Brahmā?" The doorman came back again and informed that "Which Brahmā you are?"

So Brahmā became astonished, " 'Which Brahmā?' And I am the Brahmā. I am the supreme creature within this universe, and 'Which Brahmā?' " He was surprised, and he said, "Tell Kṛṣṇa that four-headed Brahmā." Brahmā has four head. So Kṛṣṇa called him, "All right, come on." So he came, and he offered his obeisances, and Brahmā asked Him, "Kṛṣṇa, my dear . . . my Lord, may I ask You some question?" "What is that?" "That Your doorman asked me, 'Which Brahmā?' So does it mean there are other Brahmā also?" Oh Kṛṣṇa said: "Yes, there are innumerable Brahmās. You are only four-headed. There are eight-headed, there are sixteen-headed, thirty-two–headed, sixty-four–headed, hundred-twenty-eight–headed, and millions of headed. So all right, I am calling them all."

So Kṛṣṇa called all the Brahmās, and by His māyā, Brahmā could see them, but they could not see this four-headed Brahmā, and each of them came and offered obeisances to Kṛṣṇa, and they asked, "My dear Lord, You have , what . . . what can I do for You? You have asked me?" "Yes. I am not seen you for so many times, so many days, so I have called you." So they came, thousands and millions of Brahmā came, and offered obeisances, and they went away. And this Brahmā, four-headed Brahmā, remained in the corner, "Oh, what with them . . . (chuckles) what is I am?" So this is Kṛṣṇa's creation.

So here it is stated that yasyaika-niśvasita-kālam athāvalambya: "Only just abiding by the breathing period of Mahā-Viṣṇu, there are millions of Brahmās, they are living." And each Brahmā's period . . . that you have read in the Bhagavad-gītā: sahasra-yuga-paryantam arhad yad brahmaṇo viduḥ (BG 8.17).

The Brahmā's one day means 4,300,000's into 1000. That is Brahmā's twelve hours. Similarly, twenty-four hours, one day. Now calculate one month, such one year, such hundred years. So that hundred years of Brahmā is only a breathing period of Mahā-Viṣṇu, just like we are breathing, our inhalation exhalation is going on.

So during the breathing period, when the breathing is out, all these brahmāṇḍas become created, and when it is inhaled, our all, they are closed, account closed. So this is going on. And such Mahā-Viṣṇu is the part, one of the fourth part of Kṛṣṇa's expansion. That is stated. Lord Caitanya is giving evidence from Brahma-saṁhitā:

"I worship that Kṛṣṇa, Govinda, whose fourth dimension, I mean to four expansion, is Mahā-Viṣṇu, in whose breathing period all these Brahmās, or the principal head of each brahmāṇḍa, they live."

"Now, this Mahā-Viṣṇu, the puruṣāvatāra, incarnation of puruṣa, of Kṛṣṇa, is the principal Supreme Personality of Godhead of all the brahmāṇḍas, all the many thousands of brahmāṇḍas."

Now, He said: "Now You have, I have explained to you about the first incarnation, avatāra. Now just try to hear about the second, second Viṣṇu." First Viṣṇu is described. Now second Viṣṇu, what is that? Sei puruṣa (CC Madhya 20.284).

"When He entered in each universe, it was all dark. So He began to think."

Now, in each brahmāṇḍa . . . this universe what we are seeing, it is only half. The half is full with water. And where is that water, we cannot see. But there is water. Just like a ball, and half the ball, inside, is filled with water. So . . . and wherefrom this water came? The Mahā- . . . this Viṣṇu, the . . . the Viṣṇu which entered each universe, from His perspiration He created this water. And He laid down on the water. This is called Śeṣaśāyī Viṣṇu or Garbhodakaśāyī Viṣṇu. Tāṅra nābhi-padma haite uṭhila eka padma (CC Madhya 20.287): "And then He created one lotus flower from His navel." You have seen that picture in the title page, title cover. Nābhi-padma. Sei padme ha-ila brahmāra janma-sadma: "And from that lotus flower, on that lotus flower, the Brahmā, the first created being, was manifested."

And when these material worlds or universes are to be annihilated, the same Viṣṇu in His form of Lord Śiva, rudra-rūpa, He annihilates. So Viṣṇu's, Viṣṇu creates, and Lord Śiva annihilates, and Brahmā is in charge of this universe.

Now, this material world is created, it is . . . it stays for some time, and it is again annihilated. Just we have seen in the Bhagavad-gītā, bhūtvā bhūtvā pralīyate. (BG 8.19)

This is the nature. This material nature is like that. Just like you have seen one lamp. It is . . . once it is extinguished, once it is light. Similarly, there is creation, there is maintenance and there is annihilation of this material world.

Just like to a carpenter you give wood and planks and materials and screw and other things, and the carpenter makes a very good cabinet, and you . . . you maintain that, similarly, this brahmāṇḍa, the secondary creation, is Brahmā, and Viṣṇu is the maintainer, and when it is to be destroyed, it is destroyed by Lord Śiva. These three guṇāvatāra. Brahmā, viṣṇu, siva-tāṅra guṇa-avatāra. They are incarnations of Kṛṣṇa's guṇa. So in other words, it is to be understood that these three guṇas, they are also coming from Kṛṣṇa, three guṇas. So therefore, for Kṛṣṇa, there is no such distinction.

Several times just I have explained this thing, but this material, spiritual, or the qualitative differences, that is for us, not for Kṛṣṇa. How it is? Just like government has got different departments. There is criminal department, civil department, and this department, that department, so many departments.

Similarly, these distinction, these qualitative distinction, matter, spirit, and the different kinds of modes, they are distinction for us, not for Kṛṣṇa. He is Absolute. He is Absolute. To the Absolute, there is no such distinction. Therefore when Kṛṣṇa comes, when Kṛṣṇa comes in this material, He is not affected by this. Suppose the minister, the secretary of the president, goes to the criminal department to see the prison house. He is not affected by the prison rules. It is simple to understand. If the prisoner thinks, "Oh, he is also one of the prisoner, because he has come here," this is nonsense. He is not prisoner.

Similarly, when Kṛṣṇa comes in this material world, if a foolish man thinks that He is also one of us, he is foolish number one. Therefore in the Bhagavad-gītā it is stated, avajānanti māṁ mūḍhā mānuṣīṁ tanum āśritā (BG 9.11): "Foolish persons, they think that I am one of them." These examples are very nice. We can understand. So here it is stated that Viṣṇu . . .

Although this Viṣṇu is the shelter, shelter of the material energy, still, He has nothing to do with this material energy. He is free from the contamination of material energy. In the Śrīmad-Bhāgavatam there is a verse: apaśyat puruṣaṁ pūrṇaṁ māyāṁ ca yad apāśrayam (SB 1.7.4).

When Vyāsadeva, he was just attempting to write Śrīmad-Bhāgavatam by bhakti-yoga, he saw two things: apaśyat puruṣaṁ pūrṇam. He saw the Supreme Personality and the material energy, apāśrayam, just far away from Him.

Because this māyā's task is very thankless task. Māyā's task is very thankless task because he she is in charge of these conditioned souls, and her business is to give all the conditioned souls always miseries. Trisula. You have seen in the hand . . . you have . . . you may, you have might not have seen, but there is a picture of Durgā, she has got three, trisula. Trisula means three kinds of miseries. So the māyā, this material nature, is inflicting upon the conditioned soul always three kinds of miseries so that they can come to their conscious, Kṛṣṇa consciousness.

But the conditioned souls are so foolish and so dull, they have accepted, "Oh, these miseries are very palatable." Yes. They have no sense that they are always in three kinds of miseries: adhyātmika, adhibhautika, adhidaivika. This is constantly going on. Just like in the prison house, when the prisoners are there, it is not meant that they should be comfortably situated there. The prison house (is) meant for giving them always some trouble so that they can come to their consciousness, that "We have broken . . . we are lawbreakers. Therefore we are punished here." But if the prisoner becomes so fool that, "All right. Don't care for this prison. Let me finish this term and again commit nuisance and again come to the . . ." That is going on. So gatāgataṁ kāma-kāmā labhante (BG 9.21).

So the conditioned souls, they are not coming to the sense that what is their position. This position, by the grace of some special representative of the Supreme Lord or by the Supreme Lord, is offered to these conditioned souls that, "This is not your place. You are part and parcel of God. Your place is in the kingdom of God. Your place is there. You are . . ." Manaḥ-ṣaṣṭhānīndriyāṇi prakṛti-sthāni karṣati (BG 15.7): "You are struggling very hard within this material nature. Just try to understand your position." So these things are described in scriptures, in the Vedas, so that these foolish conditioned souls may come to their senses and try to become Kṛṣṇa conscious and make their life successful so that they can go back to home, back to Godhead.