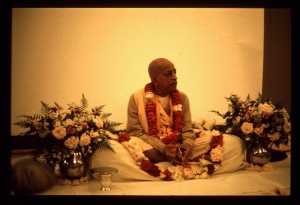 So, we have just studied the constitutional position of Kṛṣṇa by His original standing as the Supreme Personality of Godhead—His different expansions, incarnations, and how He is situated as the supreme controller of the spiritual and material manifestation. So far, as far as possible, we have studied through the grace of Lord Caitanya. And even up to the prime . . . primal living entity within this material world, namely Brahmā . . .

And only Kṛṣṇa is the master, and everyone is servant, however great he may be. So even Kṛṣṇa's expansion, Viṣṇu, He is also subordinate to Kṛṣṇa. The greatest manifestation of Viṣṇu is the Mahā-Viṣṇu, who is lying on the Causal Ocean of material creation, wherefrom the material universes are emanating by His breathing process. Such a gigantic and huge, I mean to say, form of Viṣṇu with four hands, He is also stated in the Brahma-saṁhitā:

So we are going to have our relationship with that Supreme Personality of Godhead. Then how that can be achieved? That is now being explained by Caitanya Mahāprabhu, and that is called—the process of executing the service by which we can attain to that point—is called abhidheya. Abhidheya means execution of duties, execution of duties, or execution of obligation—not duty: obligation. Duty you sometimes may avoid, and you may be excused, but obligation we cannot. Obligation means you have to. Because you are meant for that, if you do not do that, then you will be in difficulty.

Similarly, if we do not . . . just like if the hand does not work the obligation which it has—to serve this body—then it is to be understood the paralyzed or diseased, infected. And doctor sometimes advise, "Cut it off. If you want to save your other parts of the body, then cut it off."

Similarly, these conditioned souls, they are now conditioned, or in one way they are cut off from the original, I mean to say, relationship—forgetfulness. So if we want . . . if this hand wants to remain in healthy state, it is the duty of the hand to fulfill the obligation of the hand's duty, and then it remains very healthy condition.

So our duty is to serve God. There is no other duty. That is Caitanya Mahāprabhu's preaching, that "You have no other duty, anything. That is all false, illusion. If you have selected any other duty than to serve Kṛṣṇa in Kṛṣṇa consciousness, then you are foolish—you are doing something wrong, which is not for your interest." This is the teaching of Lord Caitanya and the Bhāgavata also.

So if somebody may argue, "Oh, if I completely engage myself in service of Kṛṣṇa, then what to do? How I shall live in this material world? Who will take care of my maintenance?" That is our foolishness. If you serve an ordinary person here, you get your maintenance; you get your wages, the dollars. You are so foolish that you are going to serve Kṛṣṇa and He is not going to maintain you? Yoga-kṣemaṁ vahāmy aham (BG 9.22).

Kṛṣṇa says in the Bhagavad-gītā that, "I personally take charge of his maintenance." Why don't you believe it? Practically you can see it. That means faithlessness. There is no reason. Suppose I am serving some master, so-called master, and he is at once paying me wages—"Take your wages"—twenty-five dollars, ten dollars or whatever it may be, at once paying. And I am going to serve the Supreme, and there is no maintenance for me? Oh, what a foolishness.

This is called forgetful. This is called spell of māyā. Māyā will dictate, "Oh, you are going to serve Kṛṣṇa? How you'll maintain yourself, you foolish? Don't go there. Don't go to the Kṛṣṇa consciousness Society. It is cheating." No, it is not cheating, it is actual fact. Yes. It is not cheating. But if you want to gratify your senses, oh, there is no scope. Then go to hell. Then go to hell. But if you want to serve Kṛṣṇa, there is every arrangement for you. There is every arrangement for you. If you want to cheat Kṛṣṇa, then Kṛṣṇa will also cheat you.

Kṛṣṇa wanted to cheat Dronācārya. That is a fact in the Mahābhārata. He advised Arjuna, "Just go . . ." asked Yudhiṣṭhira that "Just go and tell lie to Dronācārya that 'Your son is dead.' " Don't you think Kṛṣṇa is trying to cheat? So there is cheating. Everything is there, but that is in full. God is good—therefore His cheating is good, His thieving is good.

No. Not contradictory. This is injunction. People are actually accepting this, no argument, and they are benefited by it. So axiomatic truth. How it is truth? You may not have sufficient intelligence, but if you go deep into the matter you will find it is all truth: "Yes, it is all right." That is called Vedic injunction.

You cannot write nonsense. You have to write something which corroborates with the Vedic injunction. That is called smṛti. You cannot manufacture anything. You should always remember that, "I am a teeny brain here, so I have to receive knowledge from superior sources." Then whatever knowledge you have received, if you can expand that in your . . . by your, I mean to say, capacity, that is called smṛti.

So there are two different kinds of Vedic literature. One section is called śruti, originally coming. Just like this Caitanya-caritāmṛta: this is a book written by Kṛṣṇa dāsa Kavirāja Gosvāmī, a great devotee of Lord Caitanya. It is called smṛti. Why? Everything written here is corroborating the Vedic literature. There is nothing suggestion, "I am a philosopher. I am a speculator. I think this will be like this." Here you'll see in every step he is quoting from Vedas. Caitanya Mahāprabhu is quoting. This is the topics between Sanātana Gosvāmī . . . this is the Vedic way.

Now that sage, a great sage, he is giving his conclusion that śrutir mātā pṛṣṭā diśati bhavad-ārādhana-vidhim (CC Madhya 22.6): "I have inquired so many Vedic literature. Now I am in conclusion that worshiping the Supreme Lord, that is the injunction of the . . . nothing more. Nothing more." The whole idea is . . . and that is confirmed by Bhagavad-gītā also. Kṛṣṇa says—in the Fifteenth Chapter you will find—vedaiś ca sarvair aham eva vedyam (BG 15.15). What is the purpose of Veda? The purpose of Veda is to understand Kṛṣṇa. That's all. If you can understand to some extent Kṛṣṇa, then your all Vedic studies finished. No more taking trouble. So we have to follow.

Now, here the great sage says that, "I have consulted all the Vedic process, all the Vedic literature, and I see that bhagavad-ārādhana-vidhi: the only injunction is that to worship the Supreme Lord." And similarly, in the Bhagavad-gītā it is confirmed by the Lord, vedaiś ca sarvair aham eva vedyam: "By Vedic study means I. One has to understand Me. That's all." If you try to understand Kṛṣṇa as far as possible through the reliable sources, through the bona fide sources, then your Vedic study is going on in Kṛṣṇa consciousness. Tepus tapas . . .

Never mind that he previously was a dog-eating man. That doesn't matter." The Bhāgavata confirms it. Aho bata śvapaca 'to 'pi gāriyān: "Even the dog-eater becomes glorified." How? Yaj-jihvāgre nāma tubhyam: "In whose tongue is chanting Hare Kṛṣṇa." Never mind what you are. That chanting has made him all purified. You see?

Aho bata śvapaca 'to 'pi gāriyān yaj-jihvāgre nāma tubhyam, tepus tapas te. "Oh, how is that? He was . . . just a few days before, he was eating dog. And because he is chanting Hare Kṛṣṇa, he has become purified?" At least Hindu society, they are hesitant. Oh, the reply is, "You do not know." Tepus tapas te: "In their previous life they had already undergone many severe penances as prescribed in your Vedas." Sasnur āryā: "Oh, he is not a dog-eater. He belongs to the āryā, the advancing Āryan family." These are the injunctions.

And when the spiritual master sees that he is quite competent to come near to God, he recognizes him and he gives him sacred thread. That is called brāhmin. That is the symbol that he has approached a ācārya. Ācāryavān puruṣo veda (Chāndogya Upaniṣad 6.14.2). How one is understood that he knows spiritual science? That means who has got a spiritual master. These things are there. Śrutir mātā. Śrutir mātā.

So there was another devotee of Kṛṣṇa, he has written another nice song. He says, śrutim apare smṛtim itare bhārata manye bhava-bhītāḥ (Padyāvalī 126). Well, people are taking shelter of the Vedic literature who have become afraid of this conditional life. What is the end of Vedic literature? Just to get oneself liberated from this material entanglement. So he says that "People, those who are afraid of this material life, material entanglement, let them worship śruti, Veda, or smṛti, or Mahābhārata. Let them be engaged in that way." Śrutim apare smṛtim itare bhāratam anye bhajantu bhava-bhītāḥ.

Thank you. Any question? (end)