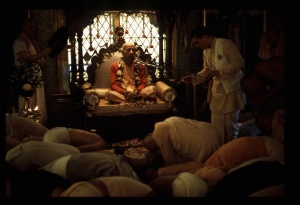 Prabhupāda: This is a quotation from Śrīmad-Bhāgavatam, Eleventh Canto. It is very nicely compared with the body of the Supreme Lord and our situation in that . . . body, in different positions.

So this comparison means that just like our head, our arms, our waist and legs, they're all important, being constitutional parts of the body, similarly, every one of us are important in consideration, being the parts and parcels of the Supreme Lord. But the conclusion is that ya eṣāṁ puruṣaṁ sākṣād-ātma-prabhavam īśvaram, na bhajanti (SB 11.5.3).

Now, some of us are the arms of the Supreme Lord, some of us the mouth of the Supreme Lord—any part of the body we are situated—but if we don't work according to our positive situation, then the result is ya eṣāṁ puruṣaṁ sākṣād-ātma-prabhavam īśvaram (CC Madhya 22.28). One who does not serve according to his position, then sthānād bhraṣṭāḥ patanty adhaḥ, he falls down from that position, and this falldown is this material body.

It is very nice example. We have got a particular position in the body of the Supreme Lord. Just consider the viśva-mūrti, the gigantic universal form of the Lord. And we are situated in different parts of the body of the Supreme Lord. So as parts and parcels of the body, we have got particular duty. If we do not accept that . . . just like the hand: if it does not work, then it is in diseased condition.

So patanty adhaḥ. Diseased condition means the falldown. So, so long we are not situated in the transcendental loving service of the Supreme Lord, we should consider that we are in diseased condition, paralyzed position. Just the hand, when it is paralyzed, it cannot work, it cannot serve the body, so similarly, when we are detached from the service of the Supreme Lord, that is our diseased condition, and to be in Kṛṣṇa consciousness, or to be in devotional service, is our positive position.

So one should try to be situated in his positive position, and being freed from this diseased condition of sense enjoyment. Just like the paralyzed hand. It is simply . . . it is called a hand, but it has no function to act as hand. Similarly, without transcendental loving service of the Supreme Lord, a so-called intelligent class is simply in name intelligent class. But it is not . . . he's actually not intelligent, because there is no function. So this is the instruction of Śrīmad-Bhāgavatam.

Now, there are many speculators, after some philosophical speculation, they think, "Now I have realized that 'I am the same. I am same God. I am God.' " So this process is called jñāna system. So Lord Caitanya says that these jñānīs, they artificially think that, "Now I have realized myself," but actually that is not self-realization.

So there are so many examples that we think ourself that, "I am the Supreme. I am the whole." Just the other day I was speaking to you, it is the last snare. We are not whole. We are part and parcel. Just . . . just the hand in healthy condition, as part and parcel of the body, is very nice. When the hand is working in his position, that position is very nice. But when it is not working—it is in diseased condition—do you think it is very nice? No.

Paralyzed hand, simply in the name it is hand, but it has no function. So that sort of understanding, without actually reinstated in the healthy state of our spiritual life, simply thinking that, "I am now spiritually realized, I am the Supreme," this is not pure. So Lord Caitanya says, vastutaḥ buddhi 'śuddha' nahe: "That sort of conception is not purified intelligence. That is still contaminated intelligence." And He is giving an evidence again from Śrīmad-Bhāgavatam:

"Those who are thinking falsely that 'I am now liberated. I have realized myself that I am the same. I am God,' " vimukta-māninaḥ tvayy asta-bhāvāt, "but he has no information of Kṛṣṇa . . . he's thinking artificially that he is liberated, but he has no information of Kṛṣṇa," tvayy asta-bhāvād aviśuddha-buddhayaḥ, "therefore, although he has advanced, to some extent in the spiritual realization path, but because he has not reached up to You, Kṛṣṇa, therefore his intelligence is not yet fully purified. He's still contaminated."

In the Bhagavad-gītā also the same thing said: bahūnāṁ janmanām ante jñānavān māṁ prapadyate (BG 7.19). After many, many births, one who is actually intelligent, actually in . . . wise, in knowledge, he surrenders unto Him. So those who are thinking that "I am now liberated simply by some volumes of philosophical speculation," so Bhāgavata says, "No, your intelligence is not yet purified, because you have not yet approached Kṛṣṇa."

So what is the result for such persons? Āruhya kṛcchreṇa paraṁ padaṁ tataḥ (SB 10.2.32). They might come to the highest position, because Brahman realization is also very high position. It is not ordinary thing that, "I am not this body. I am Brahman." This realization is not ordinary realization. It is also realized after purification of the mind. But that is also not sufficient. So āruhya kṛcchreṇa, after undergoing severe penances and philosophical research, even though he has risen up to the point of perfection, to the point of perfection, still, patanty adhaḥ, he has the chance of falling down.

So a sannyāsī is supposed to be renounced order. He has nothing to do with this material world. Then why should he come to the social order or philanthropic order? That is his falldown. That is his falldown. He should be situated completely in spiritual order. He has nothing to do. He should simply be engaged in spiritual service, in Kṛṣṇa consciousness. That is the perfection of renouncement.

Renounce means . . . what is renunciation? Renunciation means paraṁ dṛṣṭvā nivartate (BG 2.59). One is engaged in the material activities, being attracted in it, and when he loses his attraction in this material world—he is attracted by the Supreme, Kṛṣṇa—that is renunciation. By seeing the Supreme, he rejects this. Just like sometimes we also, if we get some better type of foodstuff, then we reject inferior type of foodstuff naturally. Paraṁ dṛṣṭvā nivartate.

Because he has no other alternative. Either he has to serve this way or serve that way. If he is not attracted to serve in Kṛṣṇa consciousness, then he has to serve in material consciousness. So those who are not fixed up in Kṛṣṇa, however he may be advanced in spiritual realization, that, there is falldown. It is stated in the Śrīmad-Bhāgavatam, āruhya kṛcchreṇa paraṁ padaṁ tataḥ patanty adhaḥ (SB 10.2.32). Again falls down.

So kṛṣṇa—sūrya-sama. Just like in the sunlight. During night, in darkness, we cannot understand what is what. Suppose in darkness, at night, you go up to the roof of the house and you want to see where is your home. You cannot ascertain. But in the light, when the sun is up—you can see, "Oh, that direction is my house."

Similarly, as in the sunlight everything becomes clear for our seeing, similarly, in touch with Kṛṣṇa consciousness everything becomes clear, what it is. So for a Kṛṣṇa consciousness person, these material activities appear to be merely false. Not false, but temporary. But he is eternal. Every living entity is eternal. He's interested with eternal happiness. He's not interested, I mean to say, temporary happiness.

So this is the process of understanding.

Just like where . . . wherever there is sunlight, there cannot be darkness. That is a fact. You cannot say: "Oh, sunlight and darkness, simultaneously they are existing." No. Actually in the open sunlight there cannot be any darkness. Similarly, as soon as you become Kṛṣṇa conscious, there cannot be any darkness for understanding what is . . . this material world is. That means the more you make advance in Kṛṣṇa consciousness, the more you understand the nature of this material world.

Any question? I have finished little earlier to ask you. (end)