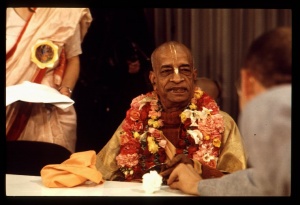 Prabhupāda: . . . Caitanya Mahāprabhu to the Māyāvādī sannyāsīs. They were convinced with the arguments and presentation of Lord Caitanya. And from that day, not only the sannyāsīs, but also the people in general, they also became very much admirer of Lord Caitanya. So:

And because He defeated the Māyāvādī philosopher, many other scholars also began to meet Him personally and talk with Him, argue with Him. So this was going on naturally. Whenever a man becomes prominent, so many others, they come to challenge him. That is natural sequence.

The speciality of Lord Caitanya Mahāprabhu was that He used to put very sound arguments, and He used to defeat His opponents in such a way that they were satisfied. They were not inimical. And with the evidence of śāstra. Not that argumentum ad baculum. He was putting reasonable arguments and evidences from śāstra, scripture.

Sarva-śāstra khaṇḍi' prabhu bhakti kare sāra. And the beauty was that He was defeating all other arguments against devotional service. He was establishing only that "God is great, and we are meant for serving Him." On this basis He was arguing and He was defeating others.

And the whole city became surcharged with Kṛṣṇa kīrtana. Everyone began to dance and sing, Hare Kṛṣṇa, Hare Kṛṣṇa, Kṛṣṇa Kṛṣṇa, Hare Hare. They may understand or not understand, but the infection was there that everyone was chanting.

Now, so far the sannyāsīs were concerned, they practically gave up their so-called Vedānta study, and they simply began to discuss on the sublime presentation of Caitanya Mahāprabhu, and they were enjoying that.

So after this incidence, one of the chief disciples of Prakāśānanda Sarasvatī, he stood up and began to glorify Lord Caitanya Mahāprabhu in the following words:

So the disciple of Prakāśānanda Sarasvatī, he addressed Caitanya Mahāprabhu as the chief Nārāyaṇa, sākṣād-nārāyaṇa. "We are all imitation Nārāyaṇa, but You are the chief Nārāyaṇa." Vyāsa-sūtrera artha karena ati-manorama. "And Caitanya's Mahāprabhu's special qualification is that He presents Vedānta-sūtra in such a nice way that it is wonderful."

"And He presents the import of Upaniṣad in such a way that everyone becomes pleased by hearing His explanation."

That "So long Śaṅkarācārya, he has imagined some meaning, and therefore that is not so pleasing as much as Caitanya Mahāprabhu's interpretation." Not interpretation, "direct explanation."

"So we belong to this Māyāvādī sect. Although we hear the Śārīraka-bhāṣya of Śaṅkarācārya and we say, 'Yes, yes,' but actually, it does not appeal to us."

Here is the important point of Māyāvādī philosophers. Every one of them, they say that "I am God," but actually he thinks within himself that, "What kind of God I am?" That is the position. But for argument's sake they will play so many things in support of their views, but actually, any sane man will think that "What kind of God I am? I cannot defend myself from the slightest attack of this material nature, and still I claim . . ."

But they cannot admit frankly. They think like that. That is being admitted here by the chief disciple of Prakāśānanda Sarasvatī, that "Although we say: 'Yes, this is . . . ' but it does not appeal to our mind." He is frankly saying.

Now he says that, "What Lord Caitanya, Śrī Kṛṣṇa Caitanya, has said, that is very nice. And we simply accept this sannyāsa order—oh, that will not help us. Simply by accepting, changing the garment, colored garment, and without understanding anything properly or dealing properly, that is not the way for salvation." Because according to Śaṅkarācārya, anyone who accepts sannyāsa, he becomes immediately Nārāyaṇa, God. He immediately becomes God.

So that is being refuted by one of the disciple, that "This is nonsense, that simply by accepting and changing the garment I become God. This is not . . ." Actually, one has to understand things as they are. So therefore, the explanation as given by Caitanya Mahāprabhu, that is right.

So far salvation is concerned, nobody can be liberated without bhakti, without devotional service. Bhakti vinā, without devotion, or without love of Godhead, without attaining . . . that is the verdict of Śrīmad-Bhāgavatam. So long one is not a surrendered soul to the Supreme Personality of Godhead, there is no question of liberation from this material world. Bhāgavata says.

That is the way of Māyāvādī philosophers. They scrutinize that, "This is māyā and this is Brahman"; therefore they are called Māyāvāda. Simply, what is not Brahman . . . they say it is one, but simply they distinguish, "This is māyā, this is Brahman." Why this is māyā? They say . . . wherefrom the māyā comes? Then it becomes dualism actually. Although they say that, "We are monists, one," but they explain that this māyā is illusion. Māyā is temporary, and actually, everything is one. Eko brahma dvitīya nāsti.

But the Vaiṣṇava philosophy is that, "Yes. It is . . ." It is called viśiṣṭādvaitavāda. We also say: "Yes, one," but one in variety. There are varieties. We don't say that māyā is something external. Māyā is there. Māyā is there. It is not external. It may be inferior, as it is explained in the Bhagavad-gītā that material energy, the material nature is inferior.

So the Bhāgavata says, simply to understand "This is not Brahman. This is māyā, this is not Brahman," if you go on speculating and without any interest for devotional service or Kṛṣṇa consciousness, then teṣām asau kleśala eva śiṣyate (SB 10.14.4, CC Madhya 22.22).

So their advancement in self-realization is simply troublesome. Troublesome. They simply take the trouble of discriminating that, "This is māyā, this is Brahman. This is false, this is reality." Because they have no other engagement. For a devotee there are so many engagements, but the Māyāvādī philosopher takes it for granted that these devotees' activities . . .

"They are cooking for Kṛṣṇa or they are offering prasādam to Kṛṣṇa, they are decorating Kṛṣṇa, or they are singing for Kṛṣṇa, glorifying Kṛṣṇa—these are all māyic activities," they say. Because this bhakti-mārga is not appealing to them. They simply want to . . .

Similarly, the bhaktas also say that "You are simply wasting time. Real thing is Kṛṣṇa. Just engage yourself in the service of Kṛṣṇa." They also say: "Kṛṣṇa is also māyā." According to them, Kṛṣṇa is also māyā. And Kṛṣṇa in Bhagavad-gītā says that they are fools. How? Avajānanti māṁ mūḍhā. Mūḍha means "The fools, they minimize Me. They decry at Me." Avajānanti māṁ mūḍhā mānuṣīṁ tanum āśritaḥ (BG 9.11). "Because I come as incarnation, therefore the fools, they consider . . . or they deride at Me." Paraṁ bhāvam ajānanto. They do not know the background of the Supreme Personality of Godhead. Mama bhūta-maheśvaram. Kṛṣṇa says: "I am the Supreme Lord." They do not know. Who do not know? The Māyāvādīs, they do not know.

So therefore their labor of love for discriminating what is māyā and what is not māyā is simply troublesome. Teṣām kleśala eva avaśiṣyate nānyad yathā sthūla-tuṣāvaghātinām. Just like the skins of rice, when it is taken, there is no more grain. So the grain is separated from the skin by beating. There is a beating machine in India.

That is a crude, original way of separating the grain from the skin. So when the skin is out from the grain, if you simply beat the skin, no more there is grain. So similarly, if you make minus Kṛṣṇa, then the study of Bhagavad-gītā is simply waste of time and labor of love. That's all. "Not Kṛṣṇa."

This means, this Māyāvāda philosophy means simply taking trouble. Bhagavad-gītā is all full, simply Kṛṣṇa. To understand this, it is a science of Kṛṣṇa. And if somebody says: "It is not Kṛṣṇa," then what is that? Simply waste of time and labor. The same thing, the grain is taken out. Simply the skin, enjoy the skin. What is there in the skin?

So this is the verdict of Śrīmad-Bhāgavatam, that:

Bodha-labdhaye. They stress on knowledge. What is this knowledge? You can talk on any insignificant thing for many years. That is not knowledge. Just like in the present modern civilization, so many nonsense articles without any utility, or volumes of volumes of books are sold in the market. There is nothing, no substance. Take for this newspaper. Especially in your country, volumes of papers in the news. Just after glancing over, it is thrown away. That's all. No more use.

Just as the newspaper is published early in the morning, and just in the afternoon it is useless, it is heap of paper only, because there is no substance. Nobody can take any interest. But see Bhagavad-gītā, it is . . . five thousand years before it was published, and a few pages only, and how much care is being taken after Bhagavad-gītā. Because there is substance.

Similarly, if you don't accept the substance, simply if you are busy with the skin . . . in Bengal it is called cavara nia tanake. Cavara means skin. You have seen coconut. The coconut is covered by heavy, what is called, fibers. So if you give up the coconut and simply quarrel with the fibers, what profit is there? There is no profit.

But what we'll gain? Kevala-bodha-labdhaye. Suppose you understand in your human form of life the whole constitution of the universe . . . that is stated in Bible also that, "If somebody understands everything, but not God, then what does he gain?"

Similarly, there is another verse in Śrīmad-Bhāgavatam that one may be very much expert to count even the atoms of the universe. You smash the universe and grind it into powder, and you just count all the atoms. That is possible. But still, it is not possible to understand the Supreme Personality of Godhead. Therefore who understands the Supreme Personality of Godhead, he understands everything. Tasmin vijñāte sarvam evaṁ vijñātaṁ bhavanti (Muṇḍaka Upaniṣad 1.3).

If somebody understand the Supreme Absolute Truth, Personality of Godhead, he understands everything, because He is everything. So we should not make progress in the negative way, leaving aside . . . just like you do not know what you are. You are studying this body. If I do not find out who is the proprietor of the body, who is sitting in the body so that this body is so nice, fresh, and walking and moving . . . that you do not find. But you simply . . . you're studying . . . what is called? Physiological condition, anatomical condition and metabolism, this or that.

There are so many big, big names. But a real, the proprietor of the body . . . the doctors are sitting, analyzing. But as soon as the soul passes, they cannot explain what happened, what happened to this meta . . . I mean to say, anatomy and physiology. They stand fools.