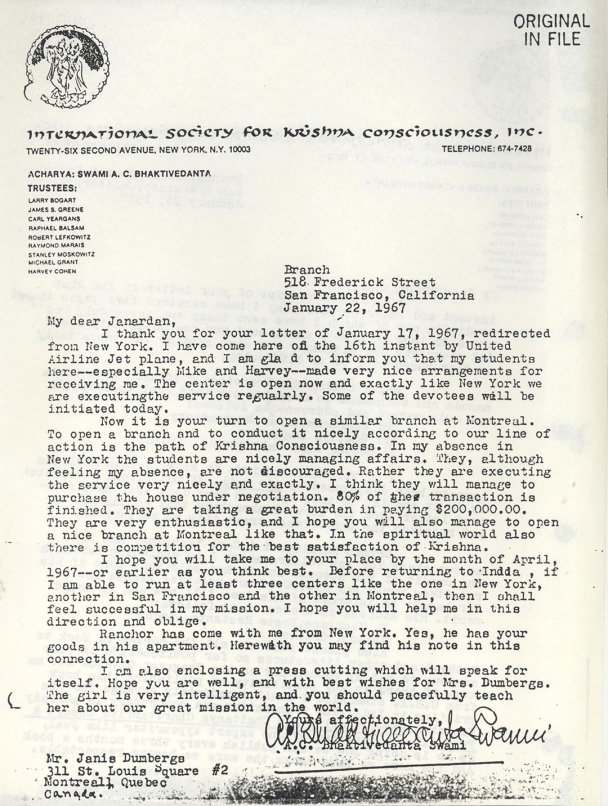 My dear Janardan,
I thank you for your letter of January 17, 1967, redirected from New York. I have come here on the 16th instant by United Airline Jet plane, and I am glad to inform you that my students here--especially Mike and Harvey--made very nice arrangements for receiving me. The center is open now and exactly like New York we are executing the service regularly. Some of the devotees will be initiated today.
Now it is your turn to open a similar branch at Montreal. To open a branch and to conduct it nicely according to our line of action is the path of Krishna Consciousness. In my absence in New York the students are nicely managing affairs. They, although feeling my absence, are not discouraged. Rather they are executing the service very nicely and exactly. I think they will manage to purchase the house under negotiation. 80% of the transaction is finished. They are taking a great burden in paying $200,000.00. They are very enthusiastic, and I hope you will also manage to open a nice branch at Montreal like that. In the spiritual world also there is competition for the best satisfaction of Krishna.
I hope you will take me to your place by the month of April, 1967--or earlier as you think best. Before returning to India, if I am able to run at least three centers like the one in New York, another in San Francisco and the other in Montreal, then I shall feel successful in my mission. I hope you will help me in this direction and oblige.
Ranchor has come with me from New York. Yes, he has your goods in his apartment. Herewith you may find his note in this connection.
I am also enclosing a press cutting which will speak for itself. Hope you are well, and with best wishes for Mrs. Dumbergs. The girl is very intelligent, and you should peacefully teach her about our great mission in the world.
Yours affectionately,