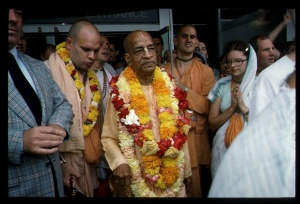 Now, there are different kinds of names of brahmacārī also under the guidance of a sannyāsī. So the person who is under the guidance of Bhāratī, the brahmacārī's name is Caitanya. So Caitanya Mahāprabhu, although He took sannyāsa, He did not change His brahmacārī name. That is also very significant. Because in the Māyāvādī sannyāsa, as soon as they take sannyāsa, they think that "I have become Nārāyaṇa." So Caitanya Mahāprabhu, although He was regularly a sannyāsī, He did not change His name of brahmacārī. That means brahmacārī is meant for serving the spiritual master, so He continued to be a servitor. That is the significance.

So Prakāśānanda Sarasvatī is asking that, "You are a sannyāsī of our sampradāya because You have accepted renounced order from Bharati. So what is the reason that You do not mix with us?" That is his first question. "And another complaint is that You are a sannyāsī. You should devote Your time in discussing philosophy, Sāṅkhya philosophy, and Vedānta-sūtra. You should learn. You should understand why You have taken sannyāsa. And what is this, that You are simply dancing and chanting Hare Kṛṣṇa, Hare Kṛṣṇa, Kṛṣṇa Kṛṣṇa, Hare Hare?" This was his first question. Yes.

So Prakāśānanda Sarasvatī asked Caitanya Mahāprabhu, "Why do you follow this sentimentalism, chanting and dancing? You are a . . . and some of the foolish persons, who have no knowledge, they also follow You. What is this?" Vedānta-paṭhana, dhyāna,—sannyāsīra dharma (CC Adi 7.69): "You have taken sannyāsa, renounced order of life. Your duty is to study Vedānta always and meditate." Tāhā chāḍi' kara kene bhāvukera . . . "And You have given up all these procedure, and You are simply chanting and dancing?"

Prabhāve dekhiye tomā sākṣāt nārāyaṇa (CC Adi 7.70). "So far I see You, from Your bodily features, oh, You appear to be very glorious. You are very intelligent." Because He was boy. Prakāśānanda Sarasvatī was very elderly, and Caitanya Mahāprabhu was only twenty-four years old. So he's appreciating that, "From Your face it appears that You are very learned, advanced. And why do You indulge in this sentimentalism?" This is very important question, and answer you should know. This saṅkīrtana movement . . . hīnācāra kara kene, ithe ki kāraṇa: "So this is not deserving to a sannyāsī."

"Yes. You are right, My dear Prakāśānanda Sarasvatī. You are right. But there is reason why do I do it. Now I can explain to you. When I took sannyāsa from My Guru Mahārāja, from My spiritual master, he found Me a rascal and fool number one, rascal." So guru more mūrkha dekhi' karila śāsana: "So, because he found Me a foolish person, therefore he has chastised Me."

Why? What is that? "He said mūrkha tumi: 'You are foolish. You have no education. You are illiterate.' " Tomāra nāhika vedāntādhikāra (CC Adi 7.72): "'It is not possible for You to understand Vedānta.'" 'Kṛṣṇa-mantra' japa sadā—ei mantra-sāra:" 'Therefore, You simply chant Hare Kṛṣṇa, Hare Kṛṣṇa, Kṛṣṇa Kṛṣṇa, Hare Hare. That will make You all right.'"

Now here is the point, that was Caitanya Mahāprabhu a foolish person? No. He was not a foolish person. In His childhood He was known as Nimāi Pandit, the greatest learned man. Even when He was sixteen years old, He defeated another very learned fellow from Kashmir. So He was reputed scholar, and He was known. And Prakāśānanda Sarasvatī knew it that Caitanya Mahāprabhu, even in His gṛhastha āśrama or in His householder life, He was a teacher of nyāya, logic, and He's great learned man. He knew it.

But Caitanya Mahāprabhu says that, "My spiritual master found Me a rascal, a fool. Therefore he said that 'You have no chance for understanding Vedānta. Therefore You take to this principle: chant simply Hare Kṛṣṇa, Hare Kṛṣṇa, Kṛṣṇa Kṛṣṇa, Hare Hare.' " What is this purpose of presenting Himself as fool and rascal? The idea is that in this age, 99.9% are fools and rascals; therefore it is very difficult for them to understand what is the purpose of Vedānta. He's representing Himself as one of the fools and rascals.

In this connection I'll, oh, I may declare herewith that some of you, if you read the Chicago speech by Vivekananda . . . that was . . . he was the first man, he came from India to preach this Hindu philosophy in 1893. Some of you know. So he has got his speech, Chicago speech of Vedānta. You will see, it is simply rascaldom. Simply.

By his speech it is written . . . if you can secure, you bring it, you will see how rascaldom he was. You'll be surprised. Even a clergyman from this country, oh, he was surprised, "Oh, you come from India and you are decrying God in this way? Oh, I'm surprised." He was . . . simply he has decried God: "Oh, why do you care for God? Throw Him, God. You are God." In this way, he has spoken.

This material world, it has got a date of its creation. Just like your body, it has got a date of its creation. It stays for some times, and again there is a date of its dissolution. You take the history of everything material, either you take this body, or take this world, or take any empire or any . . . just like your American country, oh, it has a date of its beginning. Now it is staying. Now it will be, some day will come, it will . . . there will be no more America. You should know it. That means, that is nature's law. Everything. Everything is born, it stays for some time, then it is dissolute, dissolved.

That is explained in the Bhagavad-gītā, bhūtvā bhūtvā pralīyate (BG 8.19). Bhūtvā bhūtvā pralīyate. All this thing, whatever material, that manifests, it comes out, it is manifested. It . . . just like bubbles in the ocean. There are millions and millions bubbles created one second, and next second it is finished. So janmādy asya yataḥ. But this is the manifestation of material creation. Behind this, the, this spirit is there. Therefore that spirit is Brahman. In this way . . .

Now, what is the nature of that Brahman? Is it impersonal or personal? Now, Vyāsadeva says, abhijñaḥ svarāṭ. No. "That Supreme Truth is cognizant. He knows." And Bhagavad-gītā also confirms that vedāhaṁ samatītāni (BG 7.26). The Lord says, "I know everything. I know." Unless He's cognizant, unless behind this mani . . . cosmic manifestation, if there is no brain, if there is no cognizance, how nicely it can be made so regulation, I mean to say, timely, everything is working? The planets are working. Do you think there is no brain behind this? There must be. Therefore Bhāgavata says yes, abhijñaḥ. Abhijñaḥ means He's cognizant; He's not a fool. Therefore He's person. Cognizant is a person.

And it is said, svarāṭ. Then he also educated Brahmā. He also . . . because Brahmā is considered to be the first created being in this universe. So Bhāgavata says, tene brahma hṛdā adi-kavaye. adi-kavaye means the first created being, and brahma means this Vedic knowledge. So He impregnated Brahmā with Vedic knowledge. So these are the explanation of Vedānta-sūtra. But there are so many foolish rascals, they are misusing Vedānta-sūtra in a different way.

Therefore Śrī Caitanya Mahāprabhu very cunningly represented Himself that, "I am a fool. I am a rascal. Therefore My Guru Mahārāja, My spiritual master, chastised Me, that 'You rascal, You fool, You cannot understand Vedānta-sūtra. You better take this. That will make You happy.' " Or, in other words, at the present moment, the circumstances are so awkward that it is not possible to understand Vedānta. If you indulge in Vedānta-sūtra, it will be very difficult for you. Therefore Caitanya Mahāprabhu's contribution, harer nāma harer nāma harer nāma (CC Adi 17.21): "Just chant Hare Kṛṣṇa." That will make you everything progressive. Mūrkha tumi, tomāra nāhika vedāntādhikāra (CC Adi 7.72).

So Caitanya Mahāprabhu is representing Himself as the chief man of the fools and rascals, and He says that, "My Guru Mahārāja, My spiritual master, ordered Me that 'You better chant Hare Kṛṣṇa. That will make You happy and progressive. That will make You one day understand what is Vedānta.' " 'Kṛṣṇa-mantra' haite habe saṁsāra-mocana (CC Adi 7.73).

Now one may question, "Oh, Vedānta-sūtra, understanding Vedānta-sūtra, one is liberated from this material entanglement? So you are asking me simply to chant Hare Kṛṣṇa? Will that purpose be served?" Oh, His guru said: "Yes, it will be served." He said: kṛṣṇa-mantra haite habe saṁsāra-mocana: "If You go on, continue this Hare Kṛṣṇa, Hare Kṛṣṇa, Kṛṣṇa Kṛṣṇa, Hare Hare / Hare Rāma, Hare Rāma, Rāma Rāma, Hare Hare, there will be a day when You come to the perfectional stage. Then You will be liberated." The same result as one gets out of studying Vedānta philosophy or Sāṅkhya philosophy, the same result also you will get by simply by chanting Hare Kṛṣṇa, Hare Kṛṣṇa. Kṛṣṇa-nāma haite pābe kṛṣṇera caraṇa.

"Not only that, the Vedāntists, sometimes they cannot reach up to the Kṛṣṇa planet. But Your advantage will be that You'll not only be liberated, but You will be achieving the highest planet, planetary kingdom, or the kingdom of God, You'll be able to achieve there."

And nāma vinu. Nāma vinu kali-kāle nāhi āra dharma (CC Adi 7.74). Now Caitanya Mahāprabhu explained that, "This Hare Kṛṣṇa, Hare Kṛṣṇa is the only universal religious principle in this age." No other religion process will be effective, because people are so many and diverted in different way. This is the common formula and this is the effective formula. So Caitanya Mahāprabhu says, nāma vinu kali-kāle: "Without chanting this Hare Kṛṣṇa, there is no other alternative for self-realization in this age of Kali."

(break) . . . dogmatic or dictator. Because one cannot be a guru, or spiritual master, if he creates something. No. He cannot create. Therefore Caitanya Mahāprabhu says to Prakāśānanda Sarasvatī that "My Guru Mahārāja, My spiritual master, has reason." Why? What is that reason? Kaṇṭhe kari' ei śloka kariha vicāre: "My Guru Mahārāja said . . . he gave Me one verse from authoritative Vedic literature, and he asked Me that 'You should always keep this verse within Your,' " what is called, " 'throat.' "

"In this age of Kali . . ." Kali means disagreement, quarrel and misunderstanding. This is Kali-yuga, misguiding and, I mean to say, less intelligence, less merciful, living for short period. There are so many disqualification in this age. So therefore, in the Bṛhad-nāradīya Purāṇa it is explicitly stated that,

"So My Guru Mahārāja . . ." Caitanya Mahāprabhu says that "My Guru Mahārāja, My spiritual master, asked Me to 'Keep this verse within Your throat, and You go on chanting, and I bless You that You will be liberated. You'll not only be liberated, but You shall also reach the highest goal, the Kṛṣṇa planet.' "

So we shall explain further tomorrow. Any question? (break) (end)