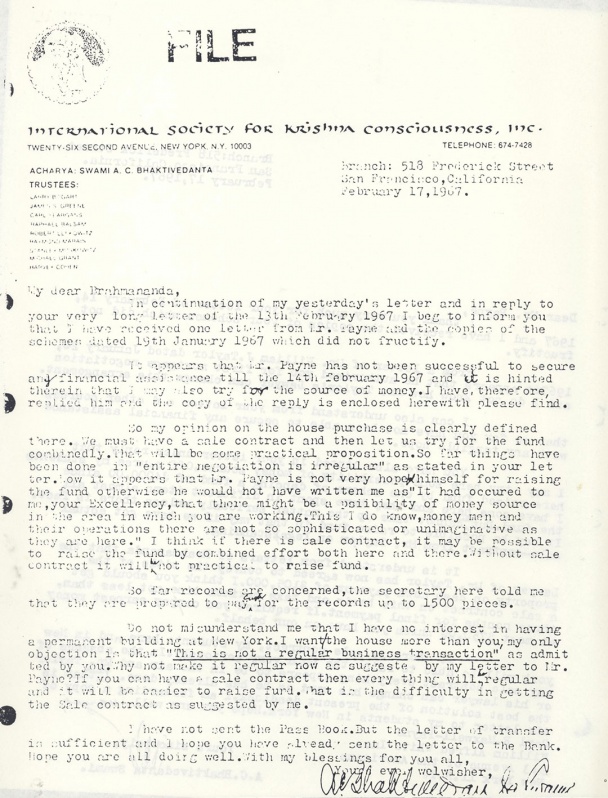 My dear Brahmananda,
In continuation of my yesterday's letter and in reply to your very long letter of the 13th February 1967 I beg to inform you that I have received one letter from Mr. Payne and the copies of the schemes dated 19th January 1967 which did not fructify.

It appears that Mr. Payne has not been successful to secure any financial assistance till the 14th february 1967 and it is hinted therein that I may also try for the source of money. I have, therefore, replied him and the copy of the reply is enclosed herewith please find.

So my opinion on the house purchase is clearly defined there. We must have a sale contract and then let us try for the fund combinedly. That will be some practical proposition. So far things have been done in "entire negotiation is irregular" as stated in your letter. Now it appears that Mr. Payne is not very happy [handwritten] himself for raising the fund otherwise he would not have written me as "It had occurred to me, your Excellency, that there might be a possibility of money source in the area in which you are working. This I do know, money men and their operations there are not so sophisticated or unimaginative as they are here." I think if there is sale contract, it may be possible to raise the fund by combined effort both here and there. Without sale contract it will be [handwritten] not practical to raise fund.

So far records are concerned, the secretary here told me that they are prepared to pay enough [handwritten] for the records up to 1500 pieces.

Do not misunderstand me that I have no interest in having a permanent building at New York. I want the house more than you; my only objection is that "This is not a regular business transaction" as admitted by you. Why not make it regular now as suggested by my letter to Mr Payne? If you can have a sale contract then every thing will be [handwritten] regular and it will be easier to raise fund. What is the difficulty in getting the Sale contract as suggested by me.

I have not sent the Pass Book. But the letter of transfer is sufficient and I hope you have already sent the letter to the Bank. Hope you are all doing well. With my blessings for you all,
Your ever well wisher,