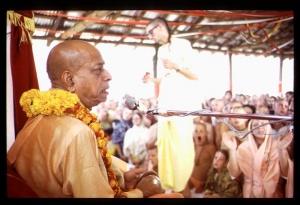 The nonsense rascals, they cannot manufacture religion. Religion cannot . . . just like ordinary citizens, they cannot make laws for the state. Suppose if you make a law. Who will care for your law? Don't take advantage of the innocent people and make your own religion and make a group and try to exploit them. This is all nonsense.

Dharmaṁ tu sākṣād bhagavat-praṇītam. Dharma means the regulation of the Supreme. So we have to know. That is religion. So any religion which is directing to obey the Supreme Lord, that is bona fide. And anything minus, or "Not to Kṛṣṇa but to me," this is a nonsense rascaldom. You see?

So before studying Vedānta, we should understand this fact. Caitanya Mahāprabhu is therefore stressing on this point, that there is no cheating, there is no mistake, there is no illusion, there is no imperfectness. Then we can make progress. If we are doubtful: "Oh, Bhagavad-gītā is spoken by some Kṛṣṇa, somebody. He was learned man, philosopher. So I can point out my own point . . ." No. Not like that. So:

This is . . . Caitanya Mahāprabhu says that all the Upaniṣads, all the Vedic literature, Vedānta-sūtra, they, they are composed in that way. Therefore, mukhya-vṛttye sei artha parama mahattva: "Therefore, if you take directly the meaning, that is the superexcellence of your understanding." Directly. Don't try to foolishly interpret. Just like in the Bhagavad-gītā the first verse is:

"My dear Sañjaya, my sons, māmakāḥ, my sons and Pāṇḍava, the sons of my younger brother, Pāṇḍu, they assembled in the battlefield which is also a pilgrimage. Then what did they do?" This is the simple. But the nonsense rascals, they are eschewing some meaning, "Oh, kuru-kṣetra means 'body,' and dharma-kṣetra means this or this . . . Pāṇḍava means 'the five senses.' " So many nonsensical . . . even Gandhi has done this. What Gandhi is? Gandhi's nothing. You see? So they are . . . these rascals are doing and misleading persons.

I've recently written one written to Dr. Radhakrishnan that "You are going to retire. Now join this Kṛṣṇa conscious movement. You have written your Bhagavad-gītā, and you don't believe Kṛṣṇa as Supreme Lord, God. Therefore by reading your Bhagavad-gītā people have become godless. So you better rectify your mistake.

Now join this." I've written state letter to Dr. Radhakrishnan. "So if you want to, I mean to say, compensate the greatest sin you have committed in your Bhagavad-gītā, then you join this Kṛṣṇa conscious movement and rectify yourself." "Not to Kṛṣṇa." So Caitanya Mahāprabhu does not approve this. Kṛṣṇa says:

So this nonsensical commentation is . . . Caitanya Mahāprabhu says, mukhya-vṛttye. Mukhya-vṛttye, directly as you understand it. If I say: "My dear such and such, give me a glass of water," now you interpret, "Oh, Swāmījī wants water. Oh, he has taken water. Let me supply this or that," interpretation. What is the use of interpreting? I'm asking for water. Give me water. Call a spade a spade.

This should be the . . . this should be the understanding of Vedānta. Because all foolish nonsense—they are interpreting, "Such-and-such person's commentation of Vedānta-sūtra." Because they were trying to manifest and expose their thinking power that, "I think that this should be like this." What nonsense you are? What you can think? You think as it is.

This is Caitanya Mahāprabhu says. Don't think otherwise. As it is. In the Upaniṣads, īśāvāsyam idaṁ sarvam: "Everything belongs to God." Believe it as belongs to God. Don't interpret. Then you'll understand Vedas. Īśāvāsyam idaṁ sarvaṁ yat kiñcit jagatyāṁ jagat (Īśo mantra 1): "Anything, any minute thing in this material world, everything belongs to that Supreme Lord." Who can deny it? Why do you interpret? Tena tyaktena bhuñjīthā: "So you enjoy as He orders you."

You are not forbidden to enjoy. Just like we say that illicit sex relation not ordered, er, not allowed. You should take it because it is stated in the Bhagavad-gītā. Dharmāviruddho kāmo 'smi aham (BG 7.11): "The sex desire which is sanctioned by religion, that is I am." That is Kṛṣṇa. Sex desire to fulfill—it does not mean that like cat, we are free. What is this freedom? That freedom has cats and dogs. They are so free that on the road they have sexual intercourse. You have not so much freedom. You have to find out a parlor, er, apartment. So do you want that is freedom? This is not freedom. This is, I mean to say, going to hell. This is not freedom.

Therefore Vedic literatures enjoins that if you want sex life, then you become householder. You marry a nice girl, and then you have got very good responsibility. This, this concession, sex life, is allowed so that you have to serve the all others. That is the responsibility. Now there are four divisions of social order—brahmacārī, gṛhastha, vānaprastha and sannyāsa. The brahmacārī does not, I mean to say, earn anything.

So Caitanya Mahāprabhu says mukhya-vṛttye, direct meaning, as it is said. That is beauty of understanding. Janmādy asya yataḥ (SB 1.1.1): "The supreme source from which everything emanating, that is Brahman." What is the interpretation? There is no interpretation. Supreme . . . there must be some supreme source. That is quite philosophical and logical, that I have my . . . this bodily existence has a source, my father. My father has a source, his father, his father . . . go on. There must be one supreme source. That is God. Simple to understand. Is it very difficult to understand?

(aside) Have you got Bhagavad-gītā?

In the Tenth Chapter you'll find this word, ahaṁ sarvasya prabhavaḥ. So things should be accepted as they are.

(aside) Have you got it?

Satsvarūpa: "I am the origin of all. From Me all proceeds. Knowing this, the wise worship Me, endowed with conviction."

Prabhupāda: This is. He's the origin of everything. Now, if somebody says: "Oh, what the commentation there?"

Satsvarūpa: Shall I read that?

Prabhupāda: No, that particular verse, ahaṁ sarvasya . . . is there any commentation?

Prabhupāda: "Teacher." Still, he'll not say "Kṛṣṇa." Kṛṣṇa-phobia. (laughter) You see? He's always thinking, "If I say 'Kṛṣṇa,' oh, then I'll be in trouble." This is the demonic tendency, and that is also explained in the Bhagavad-gītā: na māṁ prapadyante mūḍhāḥ duṣkṛtino narādhamāḥ (BG 7.15). The rascals and the lowest of the mankind, narādhama, and the asses and the, I mean, the nonsense—mūḍha means ass; simply work for others. He has no self-interest. Ass. So mūḍha. Na māṁ prapadyante mūḍhāḥ. "A person who is as rascal as an ass," mūḍhāḥ, na māṁ prapadyante mūḍhāḥ duṣkṛtina, "and always engaged in sinful activities, and the lowest of the mankind and demon, he does not," I mean to say: "surrender unto Me, accept Me."

"Oh, there are many educated persons . . ." Just like Dr. Radhakrishnan, he also says, he also, "Not to Kṛṣṇa." Then what about his education? Oh, that is also replied, māyayāpahṛta-jñānā: "Oh, he's educated—so-called. The māyā has plundered his all knowledge." That means although . . . he's an educated fool. There are educated rascals. They have got some university degrees, but actually they are rascal, less than an ass.

So that is also described: māyayā apahṛta-jñānā. They have acquired some knowledge, undoubtedly, but the essence of the knowledge is taken away by māyā. Essence of the knowledge. Just like I give you milk, but I churn it. I take the butter out, and I give you milk. It is just like that. If milk is administered while taking out the butter, that is also a cheating, because milk means to take fat. Fat we require. For our proper maintenance of the body, we require fat. So milk-drinking means eating fat. So if the fat is already taken away, what is this milk?

There are so many īśvaras, controller, but Parameśvara, or the Supreme Lord, supreme controller, is Kṛṣṇa. Īśvaraḥ paramaḥ kṛṣṇaḥ sac-cid-ānanda-vigrahaḥ. People may misunderstand, "Oh, Kṛṣṇa, we have seen Him. He's a historical person. How He can be the supreme controller? He's just like a man. He's a man like us." No. He's sac-cid-ānanda-vigrahaḥ. He's not like a man like you. His form is spiritual, blissful, eternal. "How it is eternal? We have known that He is born." That Kṛṣṇa says, janma karma me divyaṁ yo jānāti tattvataḥ (BG 4.9): "How I am born, what are My activities, if anyone knows . . ." Then what he becomes? Oh, tyaktvā dehaṁ punar: "He becomes immediately liberated."

So as they are, if we want to understand . . . acintyāḥ khalu ye bhāvā na tāṁs tarkeṇa yojayet (CC Adi 17.308, Mahābhārata, Bhīṣma-parva 5.22): "Things which are beyond your conception," avāṅ manasā gocaraḥ, "beyond your expression, beyond your knowledge, don't apply your so-called argument and reason." That is Vedānta study. If, if you do not understand, put question to your spiritual master, try to understand. But as a matter of fact, you should know, "What is stated here, that is all right. It is due to my imperfectness of knowledge I cannot just now understand it. Let me ask my spiritual master and let me understand it properly."

But a thing as it is, that is all right. We must take it. Mukhya-vṛttye. Mukhya means "as it is." Īśāvāsyam idaṁ sarvam (Īśo mantra 1).

What commentation you can give? If the Vedas says, Īśopaniṣad, that "Everything belongs to God," how can you deny it? What is your argument? What is your . . .? You cannot deny it. Similarly, all these Vedic sūtras, Upaniṣad, Vedānta, anything should be understood . . .

Now Caitanya Mahāprabhu is directly challenging Prakāśānanda Sarasvatī. Prakāśānanda Sarasvatī belonged to the Śaṅkara-sampradāya, Śaṅkara school of thought. Now, Caitanya Mahāprabhu is directly challenging that gauna-vṛttye yebā bhāṣya karila ācārya. Ācārya means Śaṅkarācārya. Śaṅkarācārya has made a commentary which is called Śārīraka-bhāṣya of Vedānta-sūtra. So Caitanya Mahāprabhu says this Śārīraka-bhāṣya, gauna-vṛttye, indirectly . . . just like we are accustomed to do: "I think the meaning should be like this," grammatical or this way or that way, jugglery of words.

So Caitanya Mahāprabhu directly accuses Śaṅkarācārya that the commentary which he has made indirectly, if we read that commentary or if we hear that commentary, then tāhāra śravaṇe nāśa haya sarva kārya, then anyone who is hearing or understanding, trying to understand the Śārīraka-bhāṣya, he is going to hell. He's not only wasting his time, but he's going to hell. Sarva nāśa. Sarva nāśa means "all auspicity lost."

Why? Why lost? Lost because as soon as you indulge in the reading of the Śaṅkara-bhāṣya, the whole program is you have to think that "I am God." So if I am God, then who is else God, that I have to worship? That means the prospect of devotional service, or Kṛṣṇa consciousness, is killed forever. Such rascal will never be able to come to Kṛṣṇa consciousness. Therefore he says, haya sarva nāśa. He is being murdered, you see, because he never will come. He'll always think, "I am God."

Well, God description is there in Parāśara-sūtra that He is full of all knowledge. That is God. And God says: "I do not know"? How he is . . .? What kind of God he is? That is clearly stated there. Why you have become dog? "I do not know. But I am God." He knows, "I am God," but he does not know why he has become dog. That is his knowledge. You'll find so many fallacies like this. How do you know that you are God? "That also I do not know." What is this? Is this any argument? But God definition is that: