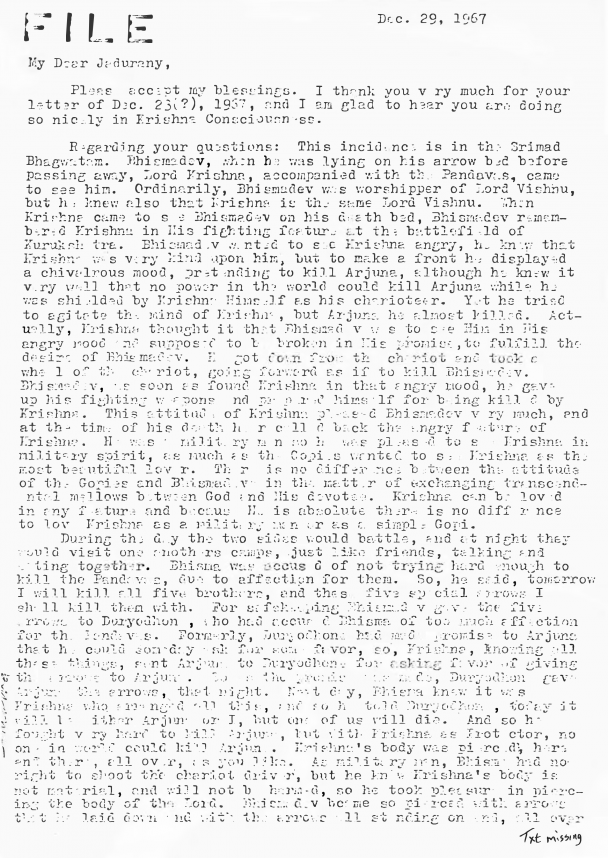 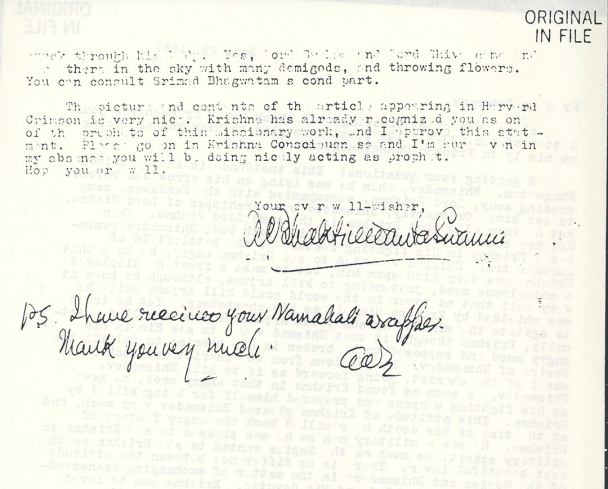 Please accept my blessings. I thank you very much for your letter of Dec. 23(?), 1967, and I am glad to hear you are doing so nicely in Krishna Consciousness.

Regarding your questions: This incidence is in the Srimad Bhagwatam. Bhismadev, when he was lying on his arrow bed before passing away, Lord Krishna, accompanied with the Pandavas, came to see him. Ordinarily, Bhismadev was worshipper of Lord Vishnu, but he knew also that Krishna is the same Lord Vishnu. When Krishna came to see Bhismadev on his death bed, Bhismadev remembered Krishna in His fighting feature at the battlefield of Kurukshetra. Bhismadev.. wanted to see Krishna angry, he knew that Krishna was very kind upon him, but to make a front he displayed a chivalrous mood, pretending to kill Arjuna, although he knew it very well that no power in the world could kill Arjuna while he was shielded by Krishna Himself as his charioteer. Yet he tried to agitate the mind of Krishna, but Arjuna he almost killed. Actually, Krishna thought it that Bhismadev was to see Him in His angry mood and supposed to be broken in His promise, to fulfill the desire of Bhismadev. He got down from the chariot and took a wheel of the chariot, going forward as if to kill Bhismadev. Bhismadev, as soon as found Krishna in that angry mood, he gave up his fighting weapons and prepared himself for being killed by Krishna. This attitude of Krishna pleased Bhismadev very much, and at the time of his death he recalled back the angry feature of Krishna. He was a military man so he was pleased to see Krishna in military spirit, as much as the Gopis wanted to see Krishna as the most beautiful lover. There is no difference between the attitude of the gopis and Bhismadev in the matter of exchanging transcendental mellows between God and His devotee. Krishna can be loved in any feature and because he is absolute there is no difference to love Krishna as a military man or as a simple Gopi.
During the day the two sides would battle, and at night they would visit one another's camps, just like friends, talking and eating together. Bhisma was accused of not trying hard enough to kill the Pandavas, due to affection for them. So, he said, tomorrow I will kill all five brothers, and these five special arrows I shall kill them with. For safekeeping Bhismadev gave the five arrows to Duryodhan, who had accused Bhisma of too much affection for the Pandavas. Formerly, Duryodhana had made promise to Arjuna that he could someday ask for some favor, so Krishna, knowing all these things, sent Arjuna to Duryodhan for asking favor of giving the arrows to Arjuna. So as the promise was made, Duryodhan gave Arjuna the arrows, that night. Next day, Bhisma knew it was Krishna who arranged all this, and so he told Duryodhan, today it will be either Arjuna or I, but one of us will die. And so he fought very hard to kill Arjuna, but with Krishna as Protector, no one in world could kill Arjuna. Krishna's body was pierced, here and there, all over as you like. As military man, Bhisma had no right to shoot the chariot driver, but he knew Krishna's body is not material, and will not be harmed, so he took pleasure in piercing the body of the Lord. Bhismadev became so pierced with arrows that he laid down and with the arrows all standing on end, all over stuck through his body. Yes, Lord Brahma and Lord Siva came and were there in the sky with many demigods, and throwing flowers. You can consult Srimad Bhagwatam second part.

The picture and contents of the article appearing in Harvard Crimson is very nice. Krishna has already recognized you as one of the prophets of this missionary work, and I approve this statement. Please go on in Krishna Consciousness and I'm sure even in my absence you will be doing nicely acting as prophet.
Hope you are well.

P.S. I have received your Namakali wrapper.
Thank you very much.[handwritten]