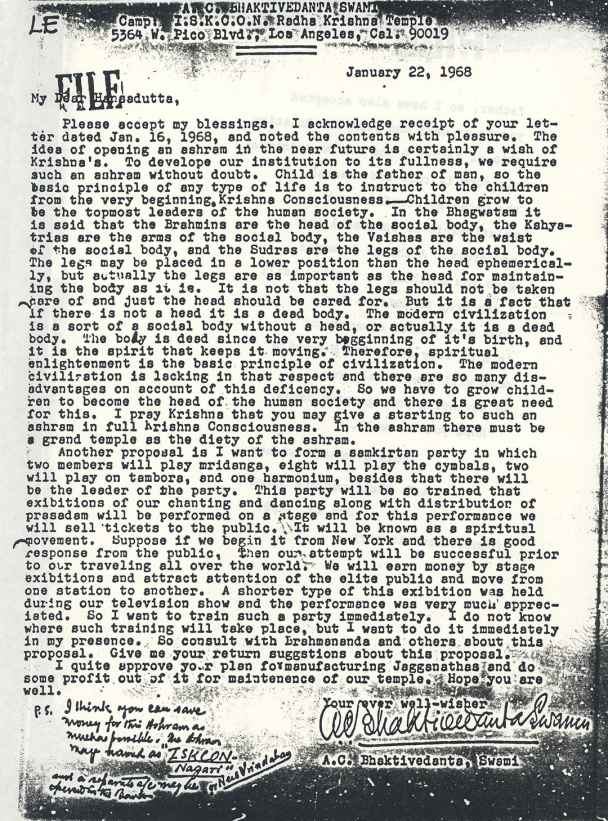 Please accept my blessings. I acknowledge receipt of your letter dated Jan. 16, 1968, and noted the contents with pleasure. The idea of opening an ashram in the near future is certainly a wish of Krishna's. To develop our institution to its fullness, we require such an ashram without doubt. Child is the father of man, so the basic principle of any type of life is to instruct to the children from the very beginning. Krishna Consciousness Children grow to be the topmost leaders of the human society. In the Bhagwatam it is said that the Brahmins are the head of the social body, the Kshatriyas are the arms of the social body, the Vaishas are the waist of the social body, and the Sudras are the legs of the social body. The legs may be placed in a lower position than the head ephemerically, but actually the legs are as important as the head for maintaining the body as it is. It is not that the legs should not be taken care of and just the head should be cared for. But it is a fact that if there is not a head it is a dead body. The modern civilization is a sort of a social body without a head, or actually it is a dead body. The body is dead since the very beginning of it's birth, and it is the spirit that keeps it moving. Therefore, spiritual enlightenment is the basic principle of civilization. The modern civilization is lacking in that respect and there are so many disadvantages on account of this deficiency. So we have to grow children to become the head of the human society and there is great need for this. I pray Krishna that you may give a starting to such an ashram in full Krishna Consciousness. In the ashram there must be a grand temple as the deity of the ashram.
Another proposal is I want to form a samkirtan party in which two members will play mridanga, eight will play the cymbals, two will play on tambors, and one harmonium, besides that there will be the leader of the party. This party will be so trained that exhibitions of our chanting and dancing along with distribution of prasadam will be performed on a stage and for this performance we will sell tickets to the public. It will be known as a spiritual movement. Suppose if we begin it from New York and there is good response from the public, then our attempt will be successful prior to our traveling all over the world. We will earn money by stage exhibitions and attract attention of the elite public and move from one station to another. A shorter type of this exhibition was held during our television show and the performance was very much appreciated. So I want to train such a party immediately. I do not know where such training will take place, but I want to do it immediately in my presence. So consult with Brahmananda and others about this proposal. Give me your return suggestions about this proposal.
I quite approve your plan for manufacturing Jaggannathas and do some profit out of it for maintenance of our temple. Hope you are well.

P.S. I think you can save money for this Ashram as much as possible. The Ashram may be named as "ISKCON-Nagari" or New Vrindaban and a separate a/c may be opened in the Bank. [handwritten]