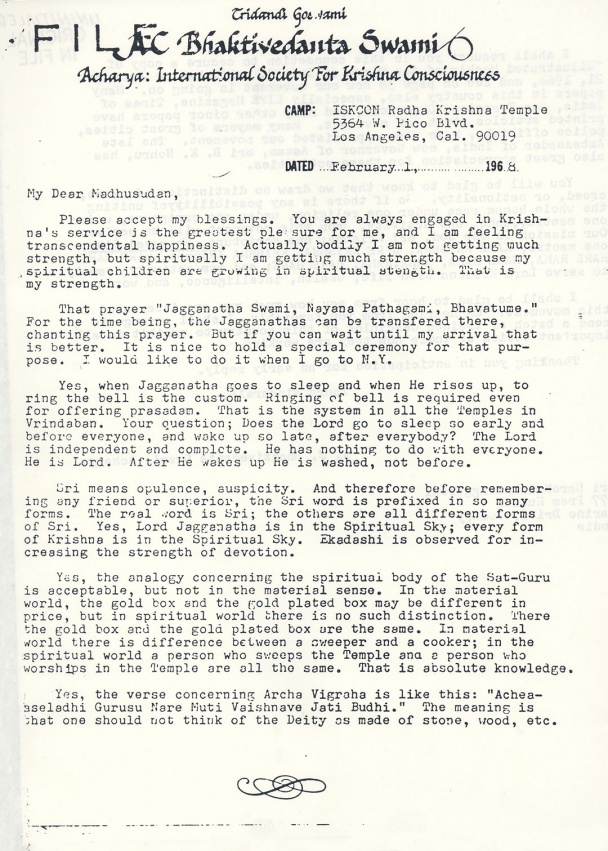 Letter to Madhusudan (Page 1 of 2) 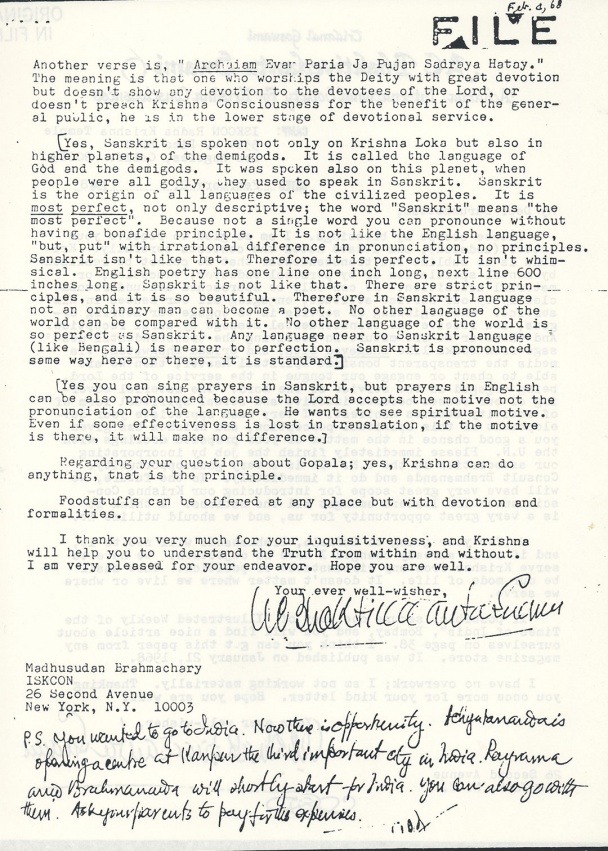 Letter to Madhusudan (Page 2 of 2)

That prayer "Jagganatha Swami, Nayana Pathagami, Bhavatume." For the time being, the Jagganathas can be transferred there, chanting this prayer. But if you can wait until my arrival that is better. It is nice to hold a special ceremony for that purpose. I would like to do it when I go to N.Y.

Yes, when Jagganatha goes to sleep and when He rises up, to ring the bell is the custom. Ringing of bell is required even for offering prasadam. That is the system in all the Temples in Vrindaban. Your question; Does the Lord go to sleep so early and before everyone, and wake up so late, after everybody? The Lord is independent and complete. He has nothing to do with everyone. He is Lord. After He wakes up He is washed, not before.

Sri means opulence, auspicity. And therefore before remembering any friend or superior, the Sri word is prefixed in so many forms. The real word is Sri; the others are all different forms of Sri. Yes, Lord Jagannatha is in the Spiritual Sky; every form of Krishna is in the Spiritual Sky. Ekadashi is observed for increasing the strength of devotion.

Yes, the analogy concerning the spiritual body of the Sat-Guru is acceptable, but not in the material sense. In the material world, the gold box and the gold plated box may be different in price, but in spiritual world there is no such distinction. There the gold box and the gold plated box are the same. In material world there is difference between a sweeper and a cooker; in the spiritual world a person who sweeps the Temple and a person who worships in the Temple are all the same. That is absolute knowledge.

Yes, the verse concerning Arcā Vigraha is like this: "Arcye viṣṇau śilā-dhīr Gurusu Nare Muti Vaishnave Jati Budhi." The meaning is that one should not think of the Deity as made of stone, wood, etc. Another verse is, "Archaiam Evam Paria Ja Pujan Sadraya Hatay." The meaning is that one who worships the Deity with great devotion but doesn't show any devotion to the devotees of the Lord, or doesn't preach Krishna Consciousness for the benefit of the general public, he is in the lower stage of devotional service.

Yes, Sanskrit is spoken not only on Krishna Loka but also in higher planets, of the demigods. It is called the language of God and the demigods. It was spoken also on this planet, when people were all godly, they used to speak in Sanskrit. Sanskrit is the origin of all languages of the civilized peoples. It is most perfect, not only descriptive; the word "Sanskrit" means "the most perfect". Because not a single word you can pronounce without having a bonafide principle. It is not like the English language, "but, put" with irrational difference in pronunciation, no principles. Sanskrit isn't like that. Therefore it is perfect. It isn't whimsical. English poetry has one line one inch long, next line 600 inches long. Sanskrit is not like that. There are strict principles, and it is so beautiful. Therefore in Sanskrit language not an ordinary man can become a poet. No other language of the world can be compared with it. No other language of the world is so perfect as Sanskrit. Any language near to Sanskrit language (like Bengali) is nearer to perfection. Sanskrit is pronounced same way here or there, it is standard.

Yes you can sing prayers in Sanskrit, but prayers in English can be also pronounced because the Lord accepts the motive not the pronunciation of the language. He wants to see spiritual motive. Even if some effectiveness is lost in translation, if the motive is there, it will make no difference.

Regarding your question about Gopala; yes, Krishna can do anything, that is the principle.

Foodstuffs can be offered at any place but with devotion and formalities.

I thank you very much for your inquisitiveness, and Krishna will help you to understand the Truth from within and without. I am very pleased for your endeavor. Hope you are well.

P.S. You wanted to go to India. Now there is opportunity. Acyutananda is opening a centre at Kanpur the third important city in India. Rayrama and Brahmananda will shortly start for India. You can also go with them. Ask your parents to pay for the expenses.[handwritten]