680429 - Letter to Nandarani and Dayananda written from New York 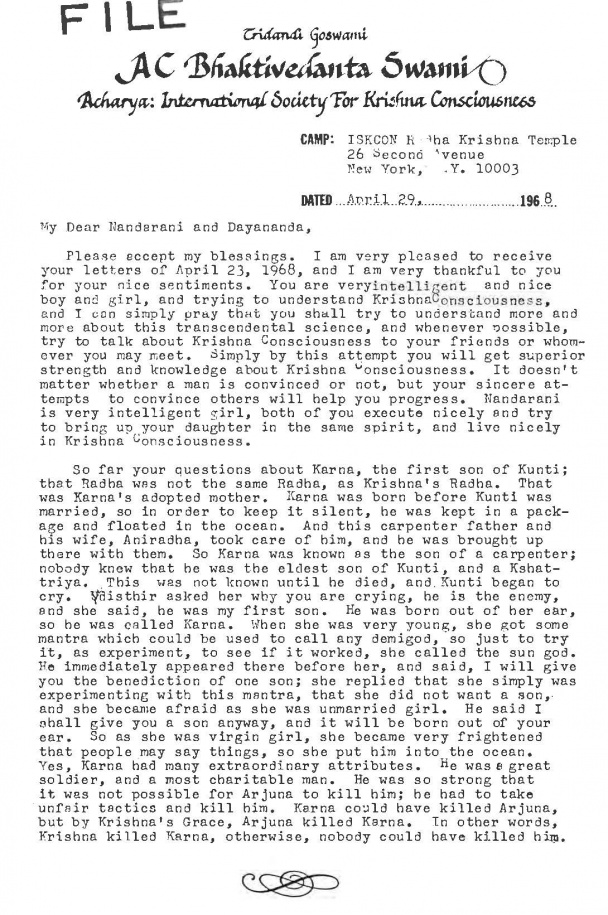 Letter to Nandarani and Dayananda (Page 1 of 2) 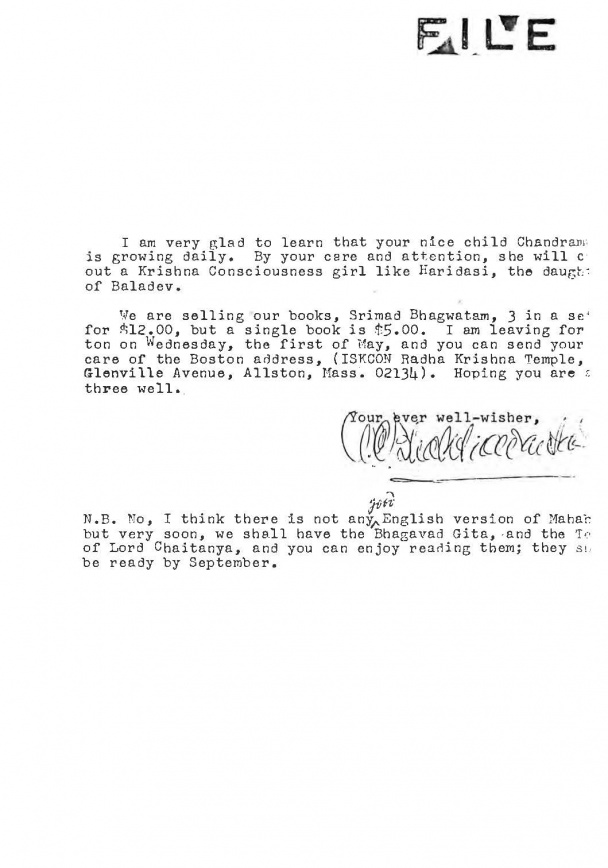 Letter to Nandarani and Dayananda (Page 2 of 2)

My Dear Nandarani and Dayananda,

Please accept my blessings. I am very pleased to receive your letters of April 23, 1968, and I am very thankful to you for your nice sentiments. You are very intelligent and nice boy and girl, and trying to understand Krishna Consciousness, and I can simply pray that you shall try to understand more and more about this transcendental science, and whenever possible, try to talk about Krishna Consciousness to your friends or whomever you may meet. Simply by this attempt you will get superior strength and knowledge about Krishna Consciousness. It doesn't matter whether a man is convinced or not, but your sincere attempts to convince others will help you progress. Nandarani is very intelligent girl, both of you execute nicely and try to bring up your daughter in the same spirit, and live nicely in Krishna Consciousness.

So far your question about Karna, the first son of Kunti; that Radha was not the same Radha, as Krishna's Radha. That was Karna's adopted mother. Karna was born before Kunti was married, so in order to keep it silent, he was kept in a package and floated in the ocean. And this carpenter father and his wife, Aniradha, took care of him, and he was brought up there with them. So Karna was known as the son of a carpenter; nobody knew that he was the eldest son of Kunti, and a Kshatriya. This was not known until he died, and Kunti began to cry. Yudhisthir asked her why you are crying, he is the enemy, and she said, he was my first son. He was born out of her ear, so he was called Karna. When she was very young, she got some mantra which could be used to call any demigod, so just to try it, as experiment, to see if it worked, she called the sun god. He immediately appeared there before her, and said, I will give you the benediction of one son; she replied that she simply was experimenting with this mantra, that she did not want a son, and she became afraid as she was unmarried girl. He said I shall give you a son anyway, and it will be born out of your ear. So as she was virgin girl, she became very frightened that people may say things, so she put him into the ocean. Yes, Karna had many extraordinary attributes. He was a great soldier, and a most charitable man. He was so strong that it was not possible for Arjuna to kill him; he had to take unfair tactics and kill him. Karna could have killed Arjuna, but by Krishna's Grace, Arjuna killed Karna. In other words, Krishna killed Karna, otherwise, nobody could have killed him.

I am very glad to learn that your nice child Chandramu is growing daily. By your care and attention, she will come out a Krishna Consciousness girl like Haridasi, the daughter of Baladev.

We are selling our books, Srimad Bhagwatam, 3 in a set for $12.00, but a single book is $5.00. I am leaving for Boston on Wednesday, the first of May, and you can send your care of the Boston address, (ISKCON Radha Krishna Temple, Glenville Avenue, Allston, Mass. 02134). Hoping you are three well.

N.B. No, I think there is not any good [handwritten] English version of Mahabharata but very soon, we shall have the Bhagavad Gita, and the Teachings of Lord Chaitanya, and you can enjoy reading them; they should be ready by September.