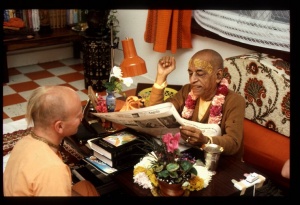 Puṇḍarīkākṣaṁ means Viṣṇu or Kṛṣṇa. Yaḥ smaret puṇḍarīkākṣaṁ: anyone, either in cleanliness or uncleanliness, it doesn’t matter, if he remembers or chants the name of Viṣṇu and Kṛṣṇa, yaḥ smaret puṇḍarī . . . sa, that person, bahya—bahya means "externally,"abhyantaraḥ, "internally."

Now, as I repeat, you chant. (responsive word-by-word chanting by devotees)

So at least for one year chanting regularly, observing the rules and regulation, one comes to the platform of spiritual platform. And then, another initiation, this is called dīkṣā. That is also dīkṣā, that is first process. This dīkṣā, second process, is not very essential. The essential is to chant. In this age, there is no need of this second initiation. But those who are going to be recognized as properly initiated, so this second installment was introduced by Sanātana Gosvāmī. Dīkṣā-vidhānena dvijatvaṁ (Hari-bhakti-vilāsa 2.12), his twice birth he’s completed.

And so far men are concerned, they are offered the sacred thread. Not the woman. The idea is woman, every woman, is supposed to be married. Of course, in your country it is not very compulsory, not very essential. In India is still, but it is gradually declining. Unless a woman is married, his life is frustrated on his debt. Even one woman is diseased or something like that—nobody cares to marry such girl—then the system is that she marries one banana tree in order to get the certificate that she’s married.

Now you will see how much husband takes care of the wife, how much it is obliging. You will see from the history of Rāmāyaṇa. Rāma . . . Lord Rāmacandra’s wife was kidnapped by Rāvaṇa. So it is not that the husband or like, "My one wife has gone; I can marry for the second time. There are many women I can . . ." No. He fought to the last, and He vanquished the whole family of Rāvaṇa to get out Sītā. This is husband’s responsibility.

This is also in India. But the śāstra does not allow that. It is not slavery, actually; it is grand protection. If the husband is nice, then wife’s position is very secure. Just like a king, and the woman whom the king marries, she becomes at once queen, without any endeavor, and she gets all the respect of the husband. Just see Rāmacandra. Rāmacandra was very young kṣatriya, fighter, everything. Sītā has no such record. But Sītā has got the same respect as Rāma—Sītā-Rāma. Now we have heard so many activities of Kṛṣṇa, nothing of Rādhārāṇī, but Rādhārāṇī is still as good as Kṛṣṇa.

So this combination, Vedic idea that woman must be under the . . . they have got three stages of life. First stage under the father, second stage under the husband. Therefore initiation, to the woman, there is no need of, I mean to say, sacred thread, because she’s considered to be the half body of her husband. She’s half-shareholder in everything of the husband; therefore there was no necessity.

Even you’ll find in the picture of Rāmacandra and Sītā, Rāmacandra has got sacred thread but Sītā hasn’t got. That is the system. So this is Vedic system, that woman is given the mantra but not the sacred thread. Even she’s born of a brāhmaṇa father, there is no such system. No. In the Bhagavad-gītā you’ll find, strī-śūdra-dvijabandhūnāṁ (SB 1.4.25).

So at the present moment everyone is śūdrā. Then why the sacred thread is offered? No, the sacred thread is not offered to the śūdrā, it is offered to the highest brāhmaṇa in Kṛṣṇa consciousness. And how? Because in India the caste system is by birth. But that is not recognized. So even one is not born in a brāhmaṇa family, a kṣatriya family, still Sanātana Gosvāmī says that by the process of initiation, any man can become a twice-born brāhmaṇa. How?

If you can chemically manipulate the bell metal, then it becomes gold. It is chemical process. Similarly, by this purificatory process of . . .

(aside) Try to sit down like that. You have to learn from him. No, your case is different.

So the whole thing is purificatory process. We are pure soul. Somehow or other we are in contamination of, in this material world. Now we have to elevate from this fallen condition to our spiritual status, then we shall be eligible to enter into the spiritual kingdom. Just like—one example—that the oil and water, it never mixes. You have seen it? That if you take one bucketful of water and put some oil, it will not mix. But collect that oil and put with oil, and it will mix immediately.

Similarly, because we are spirit soul, in the material world we are unable to adjust, that . . . so we always misadjustment. Nobody can be happy. This evening we were discussing this point with that boy, Joe, who came to tape-record. There were two one-and-a-half-hour conversations. He says that, "We Americans, we have decided that there is no God. If there is God, He is dead." And this is first-class rascaldom. God cannot be dead, and if anyone thinks like that, he’s fool number one. Bring anyone, I shall talk with him. I can challenge with him, and God is neither dead.

So this is the going-on misconception of life. Majority. "It is folly to be wise when ignorance is bliss." So, majority people are godless, animal life. Out of that a small quantity of our society may, at least in this country, be struggling for becoming Kṛṣṇa consciousness. That doesn’t matter. That doesn’t matter. We don’t want . . . if somebody comes, that’s all right.

My Guru Mahārāja used to say: "If I can deliver one soul from the clutches of māyā, then my whole mission is successful." Yes. So similarly, we are also trying to get out of this material . . . So whatever you are receiving as initiation from me, from my humble service, try to perform. Don’t neglect it, it is not very difficult. Try to follow. Make life successful. Never mind in whatever conditions you are, the mission should be to get out of the clutches of māyā.

So that should be our business. We are a brahmacārī, a gṛhastha and vānaprastha, sannyāsa. So sannyāsa may not be accepted; that doesn’t matter. Those who are brahmacārīs, please follow the rules. If to remain as brahmacārī is disturbing, get yourself married—live peacefully, husband and wife. Of course for woman, there is no such rule for becoming brahmacārī, because every girl was compulsorily married by the father.

But anyway, if you can remain brahmacāriṇī that is very nice, very nice. But if not, get yourself married, live peacefully. Don’t be disturbed. Don’t be implicated. Remain always pure, because we are aiming to be promoted in the purest kingdom, spiritual kingdom. So we should always remember that, that we are making progress in a different line.

So conscious on Kṛṣṇa. Kṛṣṇa is there. Kṛṣṇa is very kind. If anyone is serious and, I mean to . . . good faith, and you love with Kṛṣṇa, Kṛṣṇa will guide. Kṛṣṇa is with you. Simply He wants to see that you are sincere, and everything will come. There is no difficulty.

"One who is engaged in the devotional service of Me in faith and love," teṣāṁ satata-yuktānāṁ bhajatāṁ prīti . . . buddhi-yogaṁ taṁ. In buddhi-yoga. The yoga system, but not haṭha-yoga—buddhi-yoga. Buddhi-yoga. The buddhi-yoga means this bhakti-yoga. This is very intelligent yoga. Why it is called buddhi-yoga? Buddhi means "intelligent." Others, they are so much taking trouble exercising and pressing nose and so many other things, but still they are unsuccessful. Anything done intellectually is better.

Only Buddhi-yoga. And buddhi-yoga is bhakti-yoga. Why? That buddhi-yogaṁ dadāmi taṁ yena mām upayānti te. That, "I’ll give in that intelligent yoga by which he can come to Me." And what is that yoga by which one can go to Him? That is bhakti. That is in other places:

So buddhi-yogaṁor bhakti-yogaṁ, the same thing. Or "Those who are intelligent, they can take to this yoga system, bhakti-yoga, and by which one can approach Me." It is declared in many places of the authoritative scripture, that there is . . . now just like Kṛṣṇa says to Arjuna, "I am speaking to you this system of Bhagavad-gītā, yoga," bhakto 'si, "because you are My devotee."

"Any living creature, born in any sinful family, doesn’t matter. If he takes My shelter,"te 'pi yānti parāṁ gatim, "he also attains the highest perfection."

So there is no such restriction. Everything is there spoken by Kṛṣṇa. So we are doing just according to the Bhagavad-gītā. Simply we have to know where these things are available. Execute this bhakti-yoga, this kīrtana and this mantra, and chanting, and never mind in whatever occupation you are engaged; that doesn’t matter. Be happy. I may be present or not present, the guidance is always there. So you can make progress very peacefully, nice. All right. Chant Hare Kṛṣṇa. Why you stop?

Prabhupāda: Distribute prasādam, and this ṭīkā. (devotees chanting japa) So now we have to make program for starting (laughs) . . . (indistinct) . . . policy.

Devotee: Should we speak about it tomorrow?

Prabhupāda: Yes. After coming back, we make our program.

Prabhupāda: Now about the printing of Teachings, that must be immediately.

Devotee: Yes, I’ll do that.

Prabhupāda: If somebody wants to eat this banana, one can eat.

Satsvarūpa: Vaikuṇṭha dāsa? Is that it?

Mādhavī-latā: Swamījī, could you tell me how to spell my name?

Prabhupāda: Accha! Distribute it. Come on, eat. Everyone. No. I’ve taken. Everyone can take some, little, little. You can take, divide it. You’re not taking?

Satsvarūpa: The smoke is too much.

Prabhupāda: What is the name of that boy in Montreal who . . . English boy?

Prabhupāda: He has got . . . He has come from England?

Woman Devotee: I think his name is Chris.

Woman Devotee: I think his name is Chris.

Woman Devotee: I don’t know if he’s still there.

Prabhupāda: Annapūrṇā, you’re not eating this banana? Accha. So Annapūrṇā, can you help in opening a branch in London? Huh?

Prabhupāda: After Montreal I shall go to London, and you also. So make program like that. Then if it is favorable, then I shall call some of you there in London, set up a branch. Maybe Kṛṣṇa’s desire is like that.

Devotee: Yes. That would be nice.