680707 - Letter to Aniruddha written from Montreal 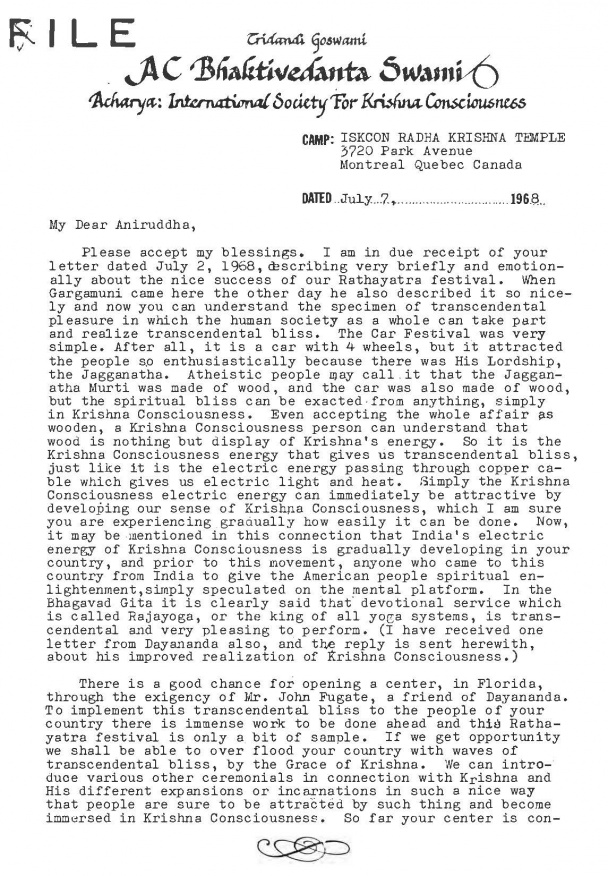 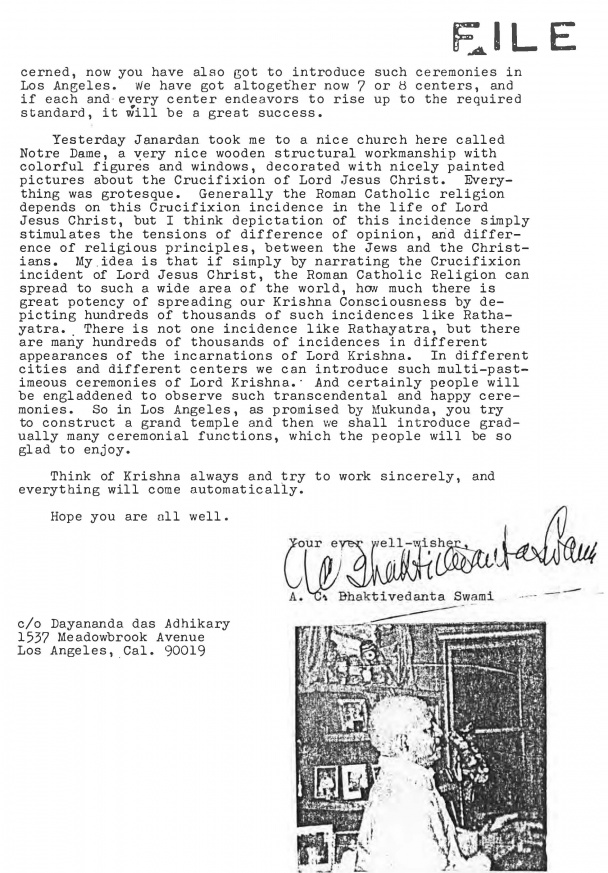 Please accept my blessings. I am in due receipt of your letter dated July 2, 1968, describing very briefly and emotionally about the nice success of our Rathayatra festival. When Gargamuni came here the other day he also described it so nicely and now you can understand the specimen of transcendental pleasure in which the human society as a whole can take part and realize transcendental bliss. The Car Festival was very simple. After all, it is a car with 4 wheels, but it attracted the people so enthusiastically because there was His Lordship, the Jagganatha. Atheistic people may call it that the Jaggannatha Murti was made of wood, and the car was also made of wood, but the spiritual bliss can be exacted from anything, simply in Krishna Consciousness. Even accepting the whole affair as wooden, a Krishna Consciousness person can understand that wood is nothing but display of Krishna's energy. So it is the Krishna Consciousness energy that gives us transcendental bliss, just like it is the electric energy passing through copper cable which gives us electric light and heat. Simply the Krishna Consciousness electric energy can immediately be attractive by developing our sense of Krishna Consciousness, which I am sure you are experiencing gradually how easily it can be done. Now, it may be mentioned in this connection that India's electric energy of Krishna Consciousness is gradually developing in your country, and prior to this movement, anyone who came to this country from India to give the American people spiritual enlightenment, simply speculated on the mental platform. In the Bhagavad-gita it is clearly said that devotional service which is called Rajayoga, or the king of all yoga systems, is transcendental and very pleasing to perform. (I have received one letter from Dayananda also, and the reply is sent herewith, about his improved realization of Krishna Consciousness.)

There is a good chance for opening a center, in Florida, through the exigency of Mr. John Fugate, a friend of Dayananda. To implement this transcendental bliss to the people of your country there is immense work to be done ahead and this Rathayatra festival is only a bit of sample. If we get opportunity we shall be able to overflood your country with waves of transcendental bliss, by the Grace of Krishna. We can introduce various other ceremonials in connection with Krishna and His different expansions or incarnations in such a nice way that people are sure to be attracted by such thing and become immersed in Krishna Consciousness. So far your center is concerned, now you have also got to introduce such ceremonies in Los Angeles. We have got altogether now 7 or 8 centers, and if each and every center endeavors to rise up to the required standard, it will be a great success.

Yesterday Janardan took me to a nice church here called Notre Dame, a very nice wooden structural workmanship with colorful figures and windows, decorated with nicely painted pictures about the Crucifixion of Lord Jesus Christ. Everything was grotesque. Generally the Roman Catholic religion depends on this Crucifixion incident in the life of Lord Jesus Christ, but I think depiction of this incident simply stimulates the tensions of difference of opinion, and difference of religious principles, between the Jews and the Christians. My idea is that if simply by narrating the Crucifixion incident of Lord Jess Christ, the Roman Catholic Religion can spread to such a wide area of the world, how much there is great potency of spreading our Krishna Consciousness by depicting hundreds of thousands of such incidents like Rathayatra. There is not one incident like Rathayatra, but there are many hundreds of thousands of incidents in different appearances of the incarnations of Lord Krishna. In different cities and different centers we can introduce such multi-pastimes ceremonies of Lord Krishna. And certainly people will be engladdened to observe such transcendental and happy ceremonies. So in Los Angeles, as promised by Mukunda, you try to construct a grand temple and then we shall introduce gradually many ceremonial functions, which the people will be so glad to enjoy.

Think of Krishna always and try to work sincerely, and everything will come automatically.

Hope you are all well.