680710 - Letter to Hayagriva written from Montreal 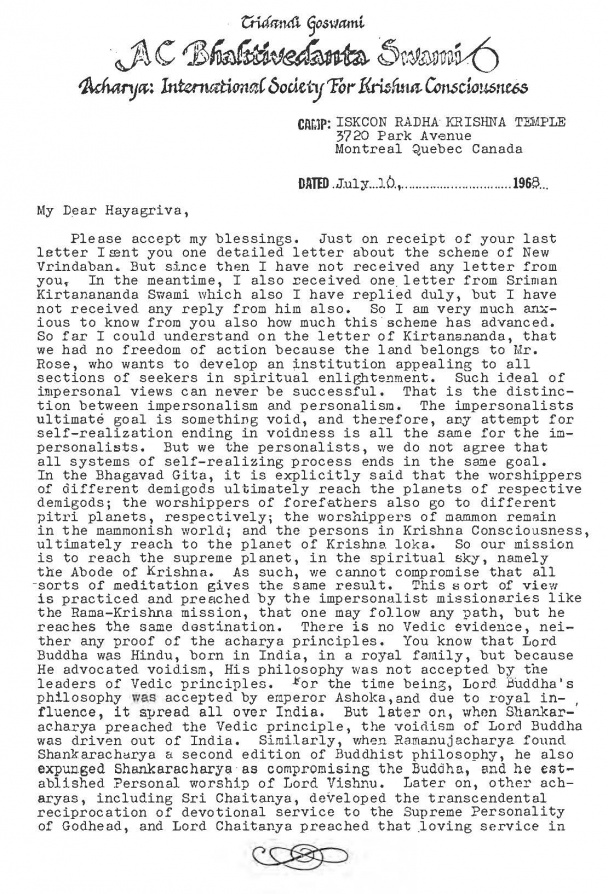 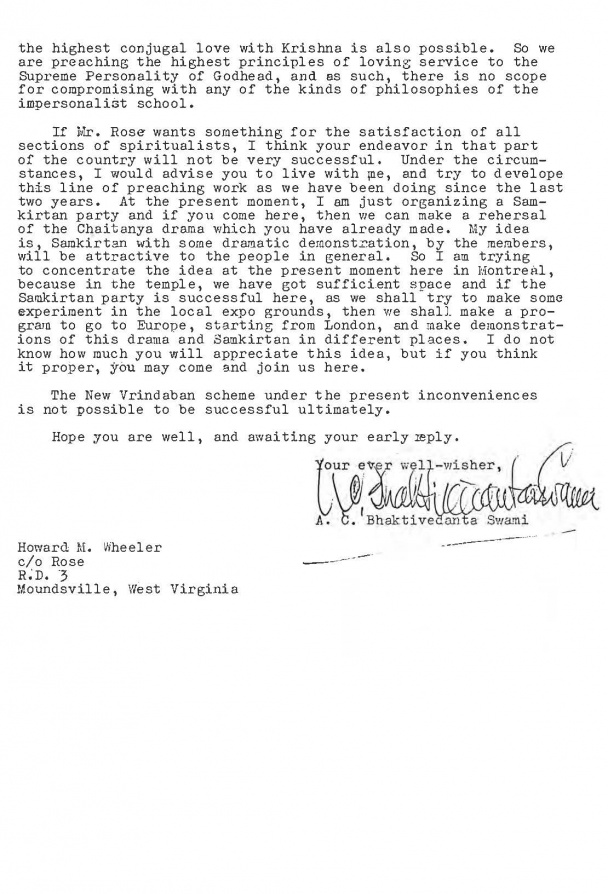 Please accept my blessings. Just on receipt of your last letter I sent you one detailed letter about the scheme of New Vrindaban. But since then I have not received any letter from you. In the meantime I also received one letter from Sriman Kirtanananda Swami which also I have replied duly, but I have not received any reply from him also. So I am very much anxious to know from you also how much this scheme has advanced. So far I could understand on the letter of Kirtanananda, that we had no freedom of action because the land belongs to Mr. Rose, who wants to develop an institution appealing to all sections of seekers in spiritual enlightenment. Such ideal of impersonal views can never be successful. That is the distinction between impersonalism and personalism. The impersonalists ultimate goal is something void, and therefore, any attempt for self-realization ending in voidness is all the same for the impersonalists. But we the personalists, we do not agree that all systems of self-realizing process ends in the same goal. In the Bhagavad Gita, it is explicitly said that the worshippers of different demigods ultimately reach the planets of respective demigods; the worshippers of forefathers also go to different pitri planets, respectively; the worshippers of mammon remain in the mammonish world; and the persons in Krishna Consciousness, ultimately reach to the planet of Krishna loka. So our mission is to reach the supreme planet, in the spiritual sky, namely the Abode of Krishna. As such, we cannot compromise that all sorts of meditation gives the same result. This sort of view is practiced and preached by the impersonalist missionaries like the Rama-Krishna mission, that one may follow any path, but he reaches the same destination. There is no Vedic evidence, neither any proof of the acharya principles. You know that Lord Buddha was Hindu, born in India, in a royal family, but because He advocated voidism, His philosophy was not accepted by the leaders of Vedic principles. For the time being, Lord Buddha's philosophy was accepted by emperor Ashoka, and due to royal influence, it spread all over India. But later on, when Shankaracharya preached the Vedic principle, the voidism of Lord Buddha was driven out of India. Similarly, when Ramanujacharya found Shankaracharya a second edition of Buddhist philosophy, he also expunged Shankaracharya as compromising the Buddha, and he established Personal worship of Lord Vishnu. Later on, other acharyas, including Sri Chaitanya, developed the transcendental reciprocation of devotional service to the Supreme Personality of Godhead and Lord Chaitanya preached that loving service in the highest conjugal love with Krishna is also possible. So we are preaching the highest principles of loving service to the Supreme Personality of Godhead, and as such, there is no scope for compromising with any of the kinds of philosophies of the impersonalist school.

If Mr. Rose wants something for the satisfaction of all sections of spiritualists, I think your endeavor in that part of the country will not be very successful. Under the circumstances, I would advise you to live with me, and try to develop this line of preaching work as we have been doing since the last two years. At the present moment, I am just organizing a Samkirtan party and if you come here, then we can make a rehearsal of the Chaitanya drama which you have already made. My idea is, Samkirtan with some dramatic demonstration, by the members, will be attractive to the people in general. So I am trying to concentrate the idea at the present moment here in Montreal, because in the temple, we have got sufficient space and if the Samkirtan party is successful here, as we shall try to make some experiment in the local expo grounds, then we shall make a program to go to Europe, starting from London, and make demonstrations of this drama and Samkirtan in different places. I do not know how much you will appreciate this idea, but if you think it proper, you may come and join us here.

The New Vrindaban scheme under the present inconveniences is not possible to be successful ultimately.

Hope you are well, and awaiting your early reply.