680808 - Letter to Satsvarupa written from Montreal 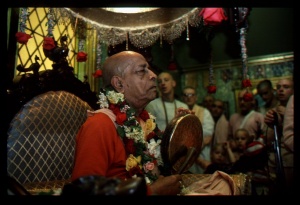 Please accept my blessings. I am in due receipt of your letter dated July 16, as well as July 30, 1968, together through Vaikunthanatha dasa. The press cuttings were nice. Pictures appeared to be very attractive, and it is learned that it is the biggest daily paper in New England. So it is good publicity. Janmastami is to be performed on the 16th of August, and the next day is my Birthday. The feasting should be held on the 17th, so that you can finish two festivals in one—namely, Nandotsava and Vyasapuja (Spiritual Master's Birthday).

I know you are doing your best to maintain the establishment of Boston center, and Krsna will certainly help you someway or other. Do not worry. I am a little anxious to understand about Jadurani. When I was in Boston, I saw her weaker, and I asked her what was the trouble. She said that it was not very serious. But now I can understand that the ailment is increasing. So she must have complete rest—no work for the time being, and positively she should not play mrdanga. I understand that she is determined to keep going at top capacity, and it is good that you have restricted her. I do not know whether Saci Suta is still there, but if he is there, show him this letter and I am asking him herewith that he may stay with you for some time. Uddhava has already joined the printing work, and I have decided that as soon as Advaita and Uddhava gives me assurance that they will be able to conduct a regular press with other assistants, I shall immediately start one press in New York. You will be pleased to learn tha I have already my immigration visa in Canada. So there will be no difficulty anymore for going to USA. It may be that I may also get American visa.

Regarding collection from the public: I think you should take special license or permission from the authority because as a religious society, we can collect in such a way. Simply the authorities have to be informed that we are a serious institute for spreading God consciousness, and that we are not professional beggars. This method of chanting in the park, distributing Prasadam, and selling our literature and making some collection, is just the way by which we can make both propaganda and maintain our institution. So this process must be continued with necessary sanction from the authority. I think there will be no difficulty in getting such sanction.

Regarding Prasadam: It should be cooked in the temple, and nowhere else, and both the Brahmacaris and the Brahmacarinis shall partake of the Prasadam in the temple. I understand that you are working also very hard, so I request you to take care of your health also.

Regarding the location of your temple: I can understand that the students are not very happy neighbors. Practically they are not students. Because the system in your country to allow the boys and girls enjoying sex life from the very early age makes them most irresponsible and careless. Student life means complete celibacy, but that is not observed in your country, rather they are indirectly encouraged by distribution of contraceptive pills. If things are allowed to go on like this, the future of the Western world is very dark. By such unrestricted association of young boys and girls, is gradually turning them to be victims of the hippy and communist philosophy. So far I have considered it is very difficult to turn the people's face toward spiritual advancement. There is so much protest all over the world in the Catholic church on account of the Pope's refusal to sanction the contraceptive method. Even if you change the locality, you cannot expect very good audience. But still, wherever we may remain, we have to chant and distribute Prasadam, and I think the best method is to do it in the public parks.

I am sending herewith two tapes for Srimad-Bhagavatam. I do not know if there are any other tapes with you, but you may send them back after typing. It is heard that the postal strike is ending, and the working of the post office will begin from tomorrow, but do not know whether it is going to happen.

Hope you are all well, and that Jadurani is feeling little better, and she must take plenty of rest.