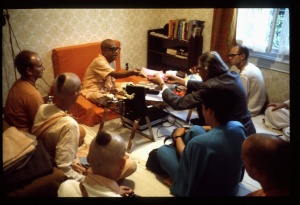 This golden frame is very costly?

Prabhupāda: So why not frame all the pictures?

Devotee: They were supposed to buy some but then somebody agreed to make them for a decent price, but he hasn't made them. I will mention it Śrīla Prabhupāda.

Prabhupāda: Is it very difficult to make?

Prabhupāda: Anyone who knows carpentry work he can do that . . .

It is to be cut in corners and then with some nails, that's all.