680922 - Letter to Kirtanananda written from Seattle 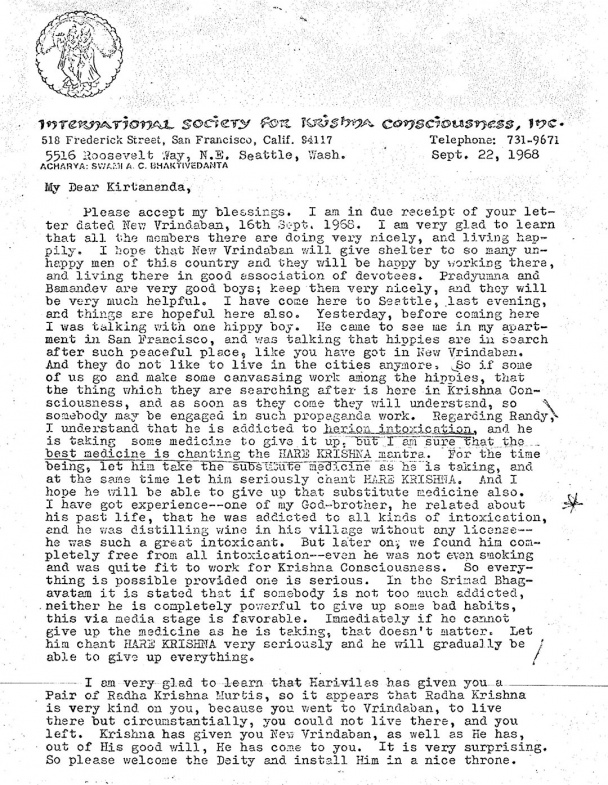 Letter to Kirtanananda (Page 1 of 2) 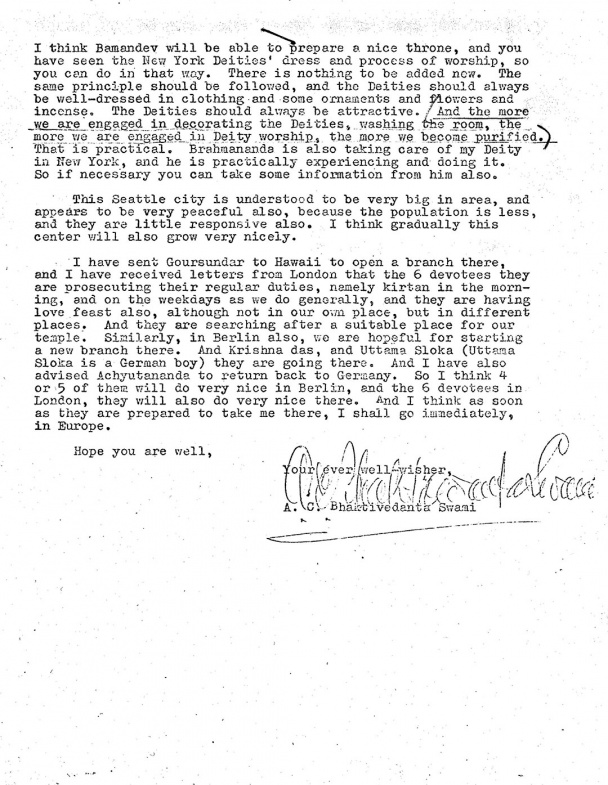 Letter to Kirtanananda (Page 2 of 2)

Please accept my blessings. I am in due receipt of your letter dated New Vrindaban, 16th Sept. 1968. I am very glad to learn that all the members there are doing very nicely, and living happily. I hope that New Vrindaban will give shelter to so many unhappy men of this country and they will be happy by working there, and living there in good association of devotees. Pradyumna and Bamandev are very good boys; keep them very nicely, and they will be very much helpful. I have come here to Seattle, last evening, and things are hopeful here also. Yesterday, before coming here I was talking with one hippy boy. He came to see me in my apartment in San Francisco, and was talking that hippies are in search after such peaceful place, like you have got in New Vrindaban. And they do not like to live in the cities anymore. So if some of us go and make some canvassing work among the hippies, that the thing which they are searching after is here in Krishna Consciousness, and as soon as they come they will understand, so somebody may be engaged in such propaganda work. Regarding Randy, I understand that he is addicted to heroin intoxication, and he is taking some medicine to give it up, but I am sure that the best medicine is chanting the HARE KRISHNA mantra. For the time being, let him take the substitute medicine as he is taking, and at the same time let him seriously chant HARE KRISHNA. And I hope he will be able to give up that substitute medicine also. I have got experience--one of my God-brothers, he related about his past life, that he was addicted to all kinds of intoxication, and he was distilling wine in his village without any license--he was such a great intoxicant. But later on, we found him completely free from all intoxication--even he was not even smoking and was quite fit to work for Krishna Consciousness. So everything is possible provided one is serious. In the Srimad Bhagavatam it is stated that if somebody is not too much addicted, neither he is completely powerful to give up some bad habits, this via media stage is favorable. Immediately if he cannot give up the medicine as he is taking, that doesn't matter. Let him chant HARE KRISHNA very seriously and he will gradually be able to give up everything.

I am very glad to learn that Harivilas has given you a Pair of Radha Krishna Murtis, so it appears that Radha Krishna is very kind on you, because you went to Vrindaban, to live there but circumstantially, you could not live there, and you left. Krishna has given you New Vrindaban, as well as He has, out of His good will, He has come to you. It is very surprising. So please welcome the Deity and install Him in a nice throne. I think Bamandev will be able to prepare a nice throne, and you have seen the New York Deities' dress and process of worship, so you can do in that way. There is nothing to be added new. The same principle should be followed, and the Deities should always be well-dressed in clothing and some ornaments and flowers and incense. The Deities should always be attractive. And the more we are engaged in decorating the Deities, washing the room, the more we are engaged in Deity worship, the more we become purified. That is practical. Brahmananda is also taking care of my Deity in New York, and he is practically experiencing and doing it. So if necessary you can take some information from him also.

This Seattle city is understood to be very big in area, and appears to be very peaceful also, because the population is less, and they are little responsive also. I think gradually this center will also grow very nicely.

I have sent Goursundar to Hawaii to open a branch there, and I have received letters from London that the 6 devotees they are prosecuting their regular duties, namely kirtan in the morning, and on the weekdays as we do generally, and they are having love feast also, although not in our own place, but in different places. And they are searching after a suitable place for our temple. Similarly, in Berlin also, we are hopeful for starting a new branch there. And Krishna das, and Uttama Sloka (Uttama Sloka is a German boy) they are going there. And I have also advised Achyutananda to return back to Germany. So I think 4 or 5 of them will do very nice in Berlin, and the 6 devotees in London, they will also do very nice there. And I think as soon as they are prepared to take me there, I shall go immediately, in Europe.

Hope you are well,