681021 - Letter to Muralidhara written from Seattle 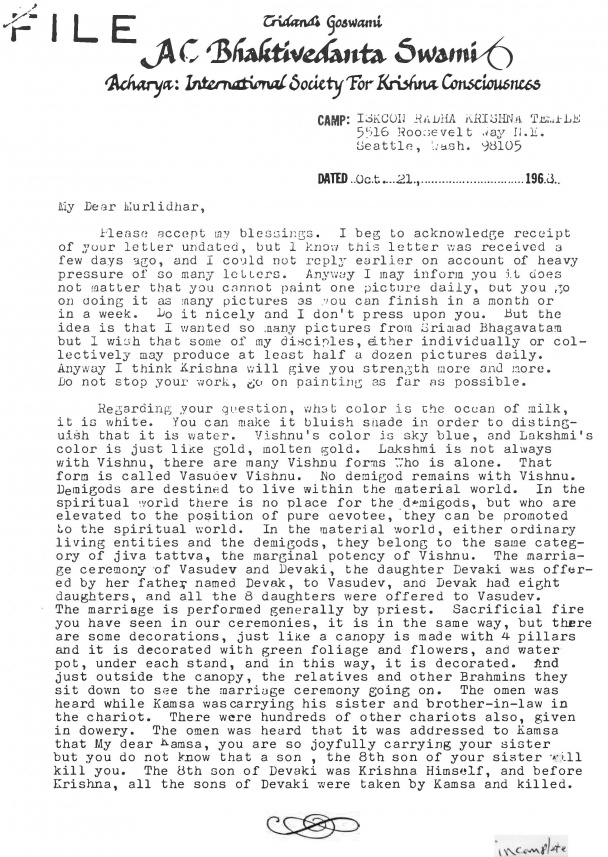 Please accept my blessings. I beg to acknowledge receipt of your letter undated, but I know this letter was received a few days ago, and I could not reply earlier on account of heavy pressure of so many letters. Anyway I may inform you it does not matter that you cannot paint one picture daily, but you go on doing it as many pictures as you can finish in a month or in a week. Do it nicely and I don't press upon you. But the idea is that I wanted so many pictures from Srimad Bhagavatam but I wish that some of my disciples, either individually or collectively may produce at least half a dozen pictures daily. Anyway I think Krishna will give you strength more and more. Do not stop your work, go on painting as far as possible.

Regarding your question, what color is the ocean of milk, it is white. You can make it bluish shade in order to distinguish that it is water. Vishnu's color is sky blue, and Lakshmi's color is just like gold, molten gold. Laksmi is not always with Visnu, there are many Visnu forms Who is alone. That form is called Vasudev Vishnu. No demigod remains with Vishnu. Demigods are destined to live within the material world. In the spiritual world there is no place for the demigods, but who are elevated to the position of pure devotee, they can be promoted to the spiritual world. In the material world, either ordinary living entities and the demigods, they belong to the same category of jiva tattva, the marginal potency of Vishnu. The marriage ceremony of Vasudev and Devaki, the daughter Devaki was offered by her father named Devak, to Vasudev, and Devak had eight daughters, and all the 8 daughters were offered to Vasudev. The marriage is performed generally by priest. Sacrificial fire you have seen in our ceremonies, it is in the same way, but there are some decorations, just like a canopy is made with 4 pillars and it is decorated with green foliage and flowers, and water pot, under each stand, and in this way, it is decorated. And just outside the canopy, the relatives and other Brahmins they sit down to see the marriage ceremony going on. The omen was heard while Kamsa was carrying his sister and brother-in-law in the chariot. There were hundreds of other chariots also, given in dowery. The omen was heard that it was addressed to Kamsa that My dear Kamsa, you are so joyfully carrying your sister but you do not know that a son, the 8th son of your sister will kill you. The 8th son of Devaki was Krishna Himself, and before Krishna, all the sons of Devaki were taken by Kamsa and killed.

Thanking you once more for writing me,