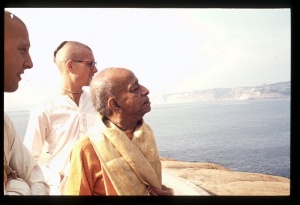 Please accept my blessings. I beg to acknowledge receipt of your letter dated Oct. 31, 1968, and I am so much pleased to read the contents. I understand that you have started to firmly initiate a campus society, called OSU Yoga Society. It would have been better to name it as Bhakti Yoga Society, otherwise the society may be understood as one of the many yoga societies. Anyway, whatever the name may be, it does not matter. If you are successful in capturing the students for chanting in the auditorium, it will be a great success. I think you have already been informed that this time I entered USA on Immigrant visa, that is to say, I have been admitted as permanent resident on the order of ordained religious minister. So this was a great problem, and Krishna has now solved it. I have got also my landed immigrant visa in Canada, but I think I shall surrender it.

I also understand that you do not want to get married now, but if you marry at all, you should marry now. Because after the age of 30, marriage is not so pleasing. Practically I am giving in charge of the different centers to the Grhasthas. If you decide to marry, there are many devotee girls, and one of them may be a very nice companion for your devotional life. You prefer to be free, but a devoted wife is as good as freedom. The Grhastha disciples, just like Syamasundara, Mukunda, and Gurudasa, with their wives, are doing very nicely in London. Similarly Dayananda and his wife Nandarani are doing very nicely here. Similarly Satsvarupa and his wife Jadurani are doing very nice in Boston. Another Grhastha, Gaurasundara, has gone to Hawaii, and his wife may go there also, and he will organize the Pacific Region. So we have taken this New Vrindaban scheme, and it has to be developed very nicely. Now because I have got my permanent visa there is no question of my convenience. Whenever you think I should go to New Vrindaban, I am prepared to go there. But I think I shall go there when there is electricity, because I want to work my dictaphone with me, and I understand the electricity is not connected there still. And I shall be glad to know when you expect to have electricity connection. I have already left Montreal, and from Montreal I went to Santa Fe, and then I have come here on the 28th of Oct.

Regarding the Bhagavad-gita, yes you must get a considerable discount. You will get 40% less than the list price, and I wish that you will distribute at least 1000 copies amongst your students, and thereby you will be able to save at least $1000 for developing New Vrindaban scheme. There are 42,000 students in your university, and if 5% of them purchased our Gita, then we can sell at least 2000 copies there. So I hope you will try for this, as far as possible, and it will be both propaganda as well as income for the New Vrindaban scheme. When you order to Brahmananda you can mention this statement of mine, and in the meantime when I write to him again I shall also inform him about that discount. In the meantime, recently I have received 40 complete sets of Srimad-Bhagavatam, and if you so desire you can order some sets immediately. I have not heard from Kirtanananda for many days and I have received from Pradyumna one letter and I have replied him. I am anxious to know also when I shall get the 1st canto of Srimad-Bhagavatam completely revised. Then we shall begin our 2nd canto. The New York boys are very much anxious to start our own press immediately and we must have sufficient matter to print in the press continually.

Hoping you are all well,