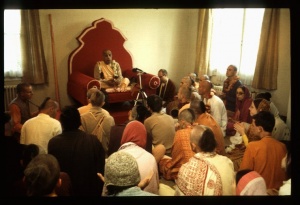 I beg to thank you for your letter (F-235) dated June 26, 1969, and I have noted the contents. That some people in India wish to donate Murtis and musical instruments but the Indian government has no provisions for such donation is most surprising. Hindustan has become independent, but while she was under foreign government she had the liberty to preach her culture and religion in foreign countries. During my Guru Maharaja's days, thousands of Rupees were being dispatched from Calcutta to London, but the new Indian government being independent, they are prohibiting to send some Murtis and mrdangas. So it is all our bad luck that these things are happening. Anyway, for the future I have arranged like this: Sriman Acyutananda Brahmacari is collecting some mrdangas and karatalas in exchange for our magazine, Back To Godhead. The price of one year subscription to Back To Godhead is $5.00, and in exchange of such one year subscription he is accepting a mrdanga and a few pair of karatalas. He has already collected a few mrdangas, and very soon he will have to dispatch them to our various centers. So please let me know whether or not you shall be able to get sanction from the Reserve Bank of India for this exchange policy of accepting goods of the value of one year's subscription. I hope the above is clear and you will do the needful.

So far as Atma Ram & Sons is concerned, I am enclosing one invoice in triplicate, and I am advising the Punjab National Bank to issue one letter addressed to you that the exchange value was received as far back as the 5th April, 1967. The copy of the letter addressed to the bank will speak for itself. I hope this copy of the letter and the triplicate invoices will solve the question, and so you can immediately dispatch the books to the New York port. I can understand that for the goods which were as gifts you had some difficulty in getting "No Objection" certificate from the Reserve Bank of India, but why you should delay in dispatching goods which we are purchasing? Before placing the order with you, I took assurance from you that ordered goods would be dispatched within one month of the date of receipt of the order. But practically, it has not happened. Why have you delayed so much in dispatching the goods? I also understand that from Hawaii they have also sent you one order, but there is no news. Anyway, for our future business relationship you should be very much prompt.