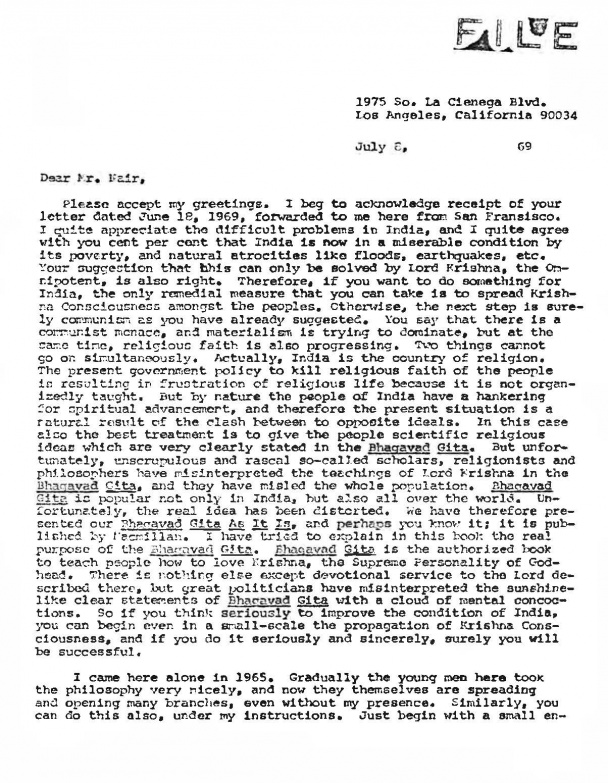 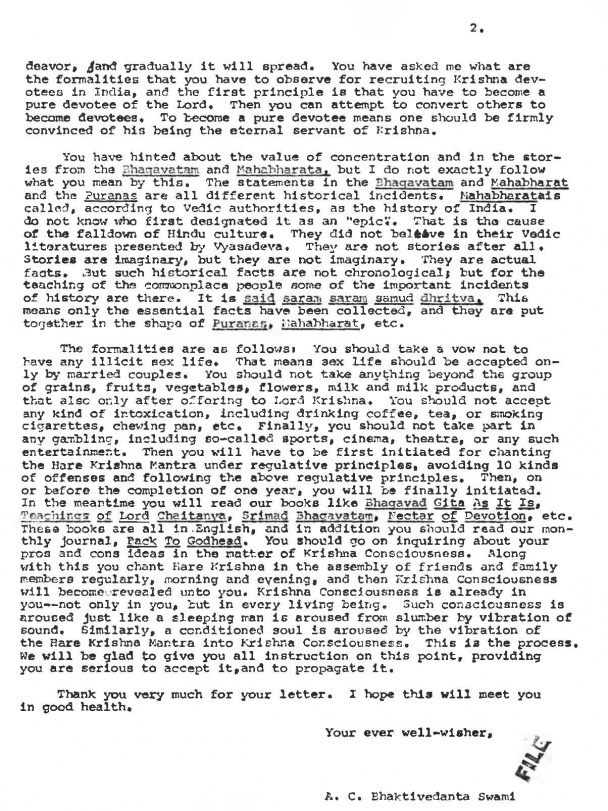 Please accept my greetings. I beg to acknowledge receipt of your letter dated June 18, 1969, forwarded to me here from San Francisco. I quite appreciate the difficult problems in India, and I quite agree with you cent per cent that India is now in a miserable condition by its poverty, and natural atrocities like floods, earthquakes, etc. Your suggestion that this can only be solved by Lord Krishna, the Omnipotent, is also right. Therefore, if you want to do something for India, the only remedial measure that you can take is to spread Krishna Consciousness amongst the peoples. Otherwise, the next step is surely communism as you have already suggested. You say that there is a communist menace, and materialism is trying to dominate, but at the same time, religious faith is also progressing. Two things cannot go on simultaneously. Actually, India is the country of religion. The present government policy to kill religious faith of the people is resulting in frustration of religious life because it is not organizedly taught. But by nature the people of India have a hankering for spiritual advancement, and therefore the present situation is a natural result of the clash between two opposite ideals. In this case also the best treatment is to give the people scientific religious ideas which are very clearly stated in the Bhagavad Gita. But unfortunately, unscrupulous and rascal so-called scholars, religionists and philosophers have misinterpreted the teachings of Lord Krishna in the Bhagavad Gita, and they have misled the whole population. Bhagavad Gita is popular not only in India, but also all over the world. Unfortunately, the real idea has been distorted. We have therefore presented our Bhagavad Gita As It Is, and perhaps you know it; it is published by MacMillan. I have tried to explain in this book the real purpose of the Bhagavad Gita. Bhagavad Gita is the authorized book to teach people how to love Krishna, the Supreme Personality of Godhead. There is nothing else except devotional service to the Lord described there, but great politicians have misinterpreted the sunshine-like clear statements of Bhagavad Gita with a cloud of mental concoctions. So if you think seriously to improve the condition of India, you can begin even in a small-scale the propagation of Krishna Consciousness, and if you do it seriously and sincerely, surely you will be successful.

I came here alone in 1965. Gradually the young men here took the philosophy very nicely, and now they themselves are spreading and opening many branches, even without my presence. Similarly, you can do this also, under my instructions. Just begin with a small endeavor, and gradually it will spread. You have asked me what are the formalities that you have to observe for recruiting Krishna devotees in India, and the first principle is that you have to become a pure devotee of the Lord. Then you can attempt to convert others to become devotees. To become a pure devotee means one should be firmly convinced of his being the eternal servant of Krishna.

You have hinted about the value of concentration and in the stories from the Bhagavatam and Mahabharata, but I do not exactly follow what you mean by this. The statements in the Bhagavatam and Mahabharata and the Puranas are all different historical incidents. Mahabharata is called, according to Vedic authorities, as the history of India. I do not know who first designated it as an "epic." That is the cause of the falldown of Hindu culture. They did not believe in their Vedic literatures presented by Vyasadeva. They are not stories after all. Stories are imaginary, but they are not imaginary. They are actual facts. But such historical facts are not chronological; but for the teaching of the commonplace people some of the important incidents of history are there. It is said saram saram samud dhritva. This means only the essential facts have been collected, and they are put together in the shape of Puranas, Mahabharata, etc.

The formalities are as follows: You should take a vow not to have any illicit sex life. That means sex life should be accepted only by married couples. You should not take anything beyond the group of grains, fruits, vegetables, flowers, milk and milk products, and that also only after offering to Lord Krishna. You should not accept any kind of intoxication, including drinking coffee, tea, or smoking cigarettes, chewing pan, etc. Finally, you should not take part in any gambling, including so-called sports, cinema, theater, or any such entertainment. Then you will have to be first initiated for chanting the Hare Krishna Mantra under regulative principles, avoiding 10 kinds of offenses and following the above regulative principles. Then, on or before the completion of one year, you will be finally initiated. In the meantime you will read our books like Bhagavad Gita As It Is, Teachings of Lord Chaitanya, Srimad Bhagavatam, Nectar of Devotion, etc. These books are all in English, and in addition you should read our monthly journal, Back To Godhead. You should go on inquiring about your pros and cons ideas in the matter of the Krishna Consciousness. Along with this you chant Hare Krishna in the assembly of friends and family members regularly, morning and evening, and then Krishna Consciousness will become revealed unto you. Krishna Consciousness is already in you--not only in you, but in every living being. Such consciousness is aroused just like a sleeping man is aroused from slumber by vibration of sound. Similarly, a conditioned soul is aroused by the vibration of the Hare Krishna Mantra into Krishna Consciousness. This is the process. We will be glad to give you all instruction on this point, providing you are serious to accept it, and to propagate it.

Thank you very much for your letter. I hope this will meet you in good health.