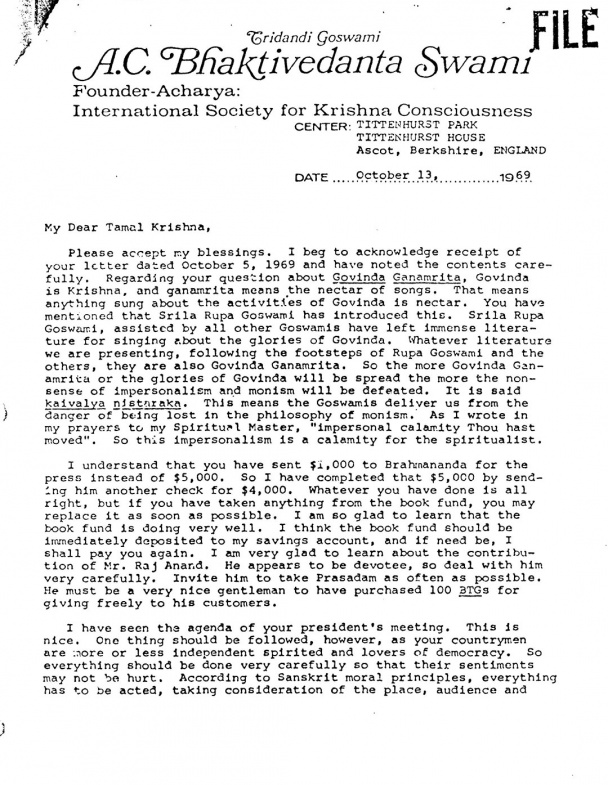 Letter to Tamal Krishna (Page 1 of 2) 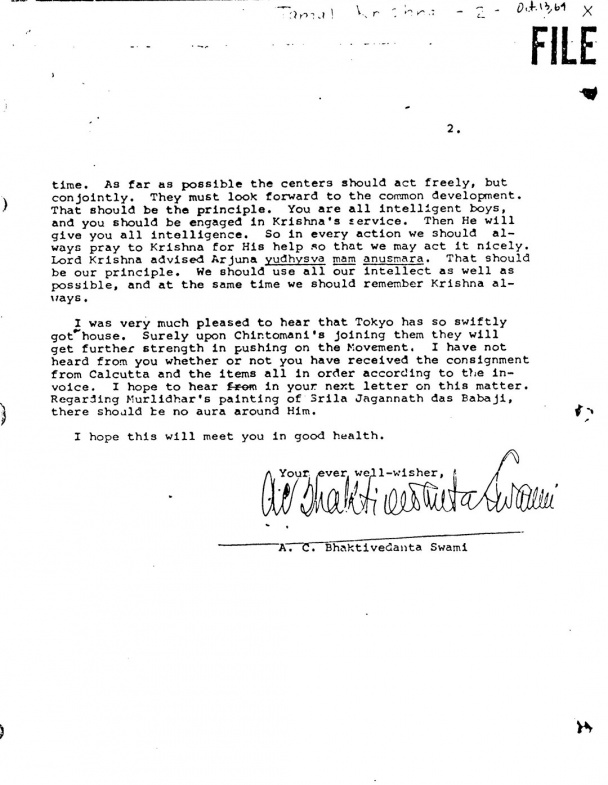 Letter to Tamal Krishna (Page 2 of 2)

Please accept my blessings. I beg to acknowledge receipt of your letter dated October 5, 1969 and have noted the contents carefully. Regarding your question about Govinda Ganamrita, Govinda is Krishna, and ganamrta means the nectar of songs. That means anything sung about the activities of Govinda is nectar. You have mentioned that Srila Rupa Goswami has introduced this. Srila Rupa Goswami, assisted by all other Goswamis have left immense literature for singing about the glories of Govinda. Whatever literature we are presenting, following the footsteps of Rupa Goswami and the others, they are also Govinda Ganamrita. So the more Govinda Ganamrita or the glories of Govinda will be spread the more the nonsense of impersonalism and monism will be defeated. It is said kaivalya nistaraka. This means the Goswamis deliver us from the danger of being lost in the philosophy of monism. As I wrote in my prayers to my Spiritual Master, "impersonal calamity Thou hast moved". So this impersonalism is a calamity for the spiritualist.

I understand that you have sent $1,000 to Brahmananda for the press instead of $5,000. So I have completed that $5,000 by sending him another check for $4,000. Whatever you have done is all right, but if you have taken anything from the book fund, you may replace it as soon as possible. I am so glad to learn that the book fund is doing very well. I think the book fund should be immediately deposited to my savings account, and if need be, I shall pay you again. I am very glad to learn about the contribution of Mr. Raj Anand. He appears to be devotee, so deal with him very carefully. Invite him to take Prasadam as often as possible. He must be a very nice gentleman to have purchased 100 BTGs for giving freely to his customers.

I have seen the agenda of your president's meeting. This is nice. One thing should be followed, however, as your countrymen are more or less independent spirited and lovers of democracy. So everything should be done very carefully so that their sentiments may not be hurt. According to Sanskrit moral principles, everything has to be acted, taking consideration of the place, audience and time. As far as possible the centers should act freely, but conjointly. They must look forward to the common development. That should be the principle. You are all intelligent boys, and you should be engaged in Krishna's service. Then He will give you all intelligence. So in every action we should always pray to Krishna for His help so that we may act it nicely. Lord Krishna advised Arjuna yudhyasva mam anusmara That should be our principle. We should use all our intellect as well as possible, and at the same time we should remember Krishna always.

I was very much pleased to hear that Tokyo has so swiftly got a house. Surely upon Chintamani's joining them they will get further strength in pushing on the Movement. I have not heard from you whether or not you have received the consignment from Calcutta and the items all in order according to the invoice. I hope to hear in your next letter on this matter. Regarding Muralidhar's painting of Srila Jagannath das Babaji, there should be no aura around Him.