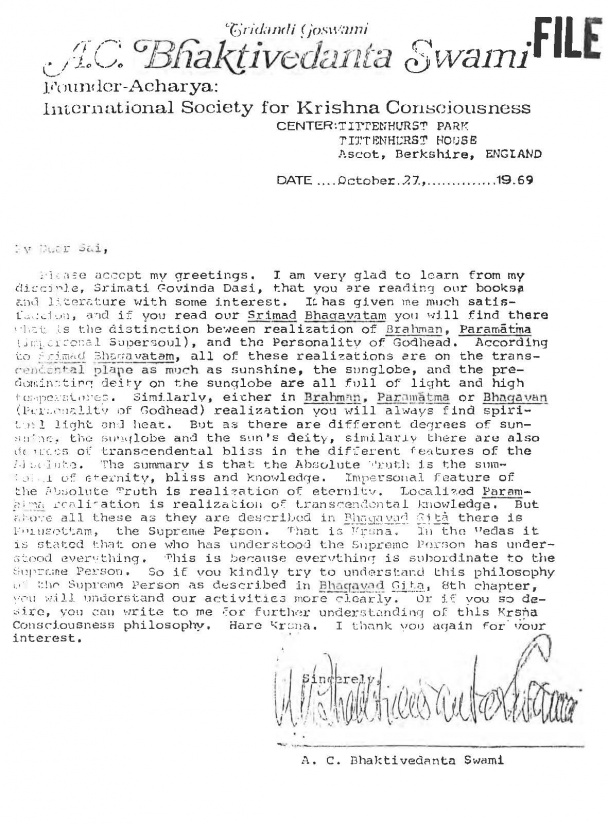 Please accept my greetings. I am very glad to learn from my disciple, Srimati Govinda Dasi, that you are reading our books and literature with some interest. It has given me much satisfaction, and if you read our Srimad Bhagavatam you will find there what is the distinction between realization of Brahman, Paramatma (impersonal Supersoul), and the Personality of Godhead. According to Srimad Bhagavatam, all of these realizations are on the transcendental plane as much as sunshine, the sunglobe, and the predominating deity on the sunglobe are all full of light and high temperatures. Similarly, either in Brahman, Paramatma or Bhagavan (Personality of Godhead) realization you will always find spiritual light and heat. But as there are different degrees of sunshine, the sunglobe and the sun's deity, similarly there are also degrees of transcendental bliss in the different features of the Absolute. The summary is that the Absolute Truth is the sum total of eternity, bliss and knowledge. Impersonal feature of the Absolute Truth is realization of eternity. Localized Paramatma realization is realization of transcendental knowledge. But above all these as they are described in Bhagavad Gita there is Purusottam, the Supreme Person. That is Krsna. In the Vedas it is stated that one who has understood the Supreme Person has understood everything. This is because everything is subordinate to the Supreme Person. So if you kindly try to understand this philosophy of the Supreme Person as described in Bhagavad Gita, 8th chapter, you will understand our activities more clearly. Or if you so desire, you can write to me for further understanding of this Krsna Consciousness philosophy. Hare Krsna. I thank you again for your interest.