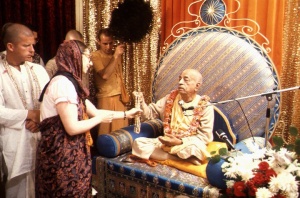 So all of you begin chanting from this big bead. Don’t touch this finger, like this:

Then you touch the next bead.

In this way come to this end. Don’t cross the summit. Again begin from here . . . here:

So again from this, this side, again from this way 16 rounds, it requires practice otherwise 16 rounds means it takes only one hour two minutes. Eh . . . 20 minutes. But in the beginning you cannot, so instead of five minutes for each round if you take 10 minutes, then 160 minutes. So a little more than two hours. You should develop, you’re going to relieved from this material contamination so you can . . . your life should be dedicated 24 hours, for Kṛṣṇa consciousness. Those who are engaged in this temple activities, there may be some concession because their life is Kṛṣṇa conscious. But those who are outside, they must regularly chant 16 rounds. Without fail. Those who are outside. So, and follow the restricted rules, and the 10 kinds of offences. Give me that paper.

The first offense is blaspheming the Lord's devotee. Anyone . . . it does not matter that your spiritual master is devotee and nobody is devotee. No. The devotee . . . the life of devotee is already explained, that he is fixed up in God. He has no other business than to think of God, talk of God, preaching of God, he's a devotee.

It does not matter whether he is born this country or that country or that province or this province or this planet or that planet. Anyone whose life is simply absorbed in Kṛṣṇa consciousness and thoughts of God, he's a devotee. So we should not blaspheme that, "Our process is better. Your process is . . . " That is due to ignorance. So this is offense: blaspheme the devotee.

So if there are many, then how God can be Supreme? God is great. "God is great" means nobody is greater than Him, nobody is equal to Him. Everybody is under Him. You may have very high qualifications, but you cannot be equal to God. God is one. Therefore the Māyāvādīs' philosophy that, "You can accept, by imagination, any form of God and that is all right," no. You should have the actually the form of God.

Just like Kṛṣṇa says, mam ekam. Ekam means only one, "Unto Me." Of course, there are many other forms of God, but in order to concentrate your mind perfectly, you should only think of Kṛṣṇa. Mām ekaṁ śaraṇaṁ vraja (BG 18.66). So we do not accept this nonsense philosophy that any name we chant, it becomes God. No. God's name. Of course, a God's name may be sounding . . . just like you say "water", I say jala.

So you see Kṛṣṇa's activities, Kṛṣṇa's bodily feature, Kṛṣṇa's instruction, it is one, sublime. Sublime. Therefore He's God. And it is not our sentiment, but it is confirmed by the Vedic literature. Bhagavata says, kṛṣṇas tu bhagavān svayam (SB 1.3.28): "Kṛṣṇa is the Supreme Personality of Godhead." Brahma-saṁhitā says, īśvara parama-kṛṣṇa (Bs. 5.1). There are many gods, demigods, but God is one. Arjuna says, paraḥ brahma, every living entity is Brahman, but He's paraḥ brahma, the Supreme Brahman.

And Kṛṣṇa says in the Bhagavad-gītā, mattaḥ parataraṁ nasti kiñcid asti dhanañjaya (BG 7.7): "There is nothing more superior than Me." So these . . . are we have to take evidences from the śāstra, kṛṣṇas tu bhagavan svayam. So nobody should think that, "If I chant the name of this demigod or that demigod, this is equal to chant the name of Hari or Kṛṣṇa." No, that is an offense. This is third offense.

Fifth offense: interpreting the holy name of God. Interpreting. Because we have got very fertile brains, we can interpret in so many ways. Māyā gives us such knowledge, this way and that way, that way. No. Don’t try to interpret. Therefore we are presenting Bhagavad-gītā as it is. No interpretation. Kṛṣṇa says that, mām ekaṁ śaraṇaṁ vraja (BG 18.66). Kṛṣṇa says: "Just surrender unto Me," and we are teaching, "Just surrender to Kṛṣṇa." Is there any difference? No difference. Therefore in speaking we are actually the representative of Kṛṣṇa. Kṛṣṇa says: "Surrender unto Me." And we, in the disciplic succession of this Kṛṣṇa consciousness movement, we are also speaking, "Just surrender to Kṛṣṇa."

We do not imitate, do not interpret that, "This 'Me' means me." The Māyāvādī philosopher, they say, everyone can say: "Me" means "I", "unto me." But is that grammatically correct? Eh? If I say that, "Please give me a glass of water," now if everyone of you say that, "This 'me' means me," so you take every one of us wants a glass of water, this is nonsense interpreting. But the Māyāvādī philosophers, because they are atheists, because they do not accept the existence of God, they interpret the śāstras in different way so that . . . but that cannot stand. That may be very nice to some foolish men, but actually, if some . . . they meet some intelligent man, then they are dividend . . . so this sort of interpretation is useless.

Committing sin on the strength of chanting. Now this is your beginning of life. This chanting means whatever you have done in your past life, sinful, that is now squared up. But you should not commit sin. The four pillars of sinful life is this, or this. What is that? That Illicit sex, that intoxication, meat-eating, and . . . what is that? Gambling. These are the four pillars, just as your table stands on the four legs, or this house stands on four legs, four wheel, this car stands, similarly this sinful life personified stands on these four pillars. If you break these four pillars, then it has no standing.

Now, whatever has been done is done. That is not a disqualification. This Kṛṣṇa consciousness movement does not say that first of all you . . . just like other śāstras say atonement, or you pay some fine for your sinful life or . . . no. Every conditioned soul is apt to commit some . . . so many sins, knowingly or unknowingly, so whatever is done is done. Now from this day, no more sinful life. Don’t think, "Oh, I am chanting Hare Kṛṣṇa, so this is a counteracting method, so let me commit this sinful act, and it will become counteracted because I am chanting." Don’t do that. We don't believe in that way. Not that is . . .

Just like somebody says that you commit sin, but you confess, and you're . . . that's all right. By confessing, your sinful reaction is eradicated. But if you commit again, oh, that is foolishness. So this example I have given you several times: just like if you have committed something wrong, you go to the court, criminal, and if you say: "My Lord, I did not know this, I mean to say, unlawful. So next time I shall be careful—I shall not do it," then it is excused. But if next time you go to the court and you'll say: "Please excuse," oh, that is . . . there is no excuse. So this confession, once is right, twice is right, thrice is right—fourth time, oh, you are severely punished. That is common sense. So you do not commit sin, because by mistake you might commit some sin, that maybe excused but if you take it a business that, "Because I am chanting Hare Kṛṣṇa mantra, therefore I can commit this sin, there is no reaction," no. That is offense. It is great offense.

Then, seventh offense: instructing the glories of the Lord's name to the unfaithful. This chanting of the Hare Kṛṣṇa mantra we offer when one has become faithful. So many students come to us, but we see first of all that, "He is now faithful. He's faithfully discharging." So generally, we allow six months' time to see how he's faithfully executing; then we offer these beads. Otherwise, if he's faithless, then after some time it will . . . he'll give it up. So for the spiritual master it is also offense. If one is faithless, this chanting on beads should not be given to him. This is offense.

Then, inattention while chanting the holy name. You should chant this Hare Kṛṣṇa, and you should hear also. If your mind is acting, the mind is somewhere else, and you are chanting, oh, that is an offense. You should hear. This is called samādhi. If you chant and hear, then your mind is interlocked by hearing and chanting. This is samādhi. Samādhi means trance. Trance means completely absorbed in. So by hearing and chanting, acting both ways, you’ll be in trance, and that trance will keep you in the transcendental stage. That is called samādhi. So if we become inattentive, that is offense.

And attachment to material things while engaged in the practice of chanting. We should always remember that we are trying to be elevated to the spiritual platform, so spiritual platform means no more anxiety for sense gratification. That is spiritual platform. Material platform means everyone is hankering after sense gratification. All the people, they’re working day . . . hard, day and night very hard, the aim is sex at night. That's all. Sense gratification. Karmīs, they cannot work if they have no facility for sex. So . . . but these devotees of Kṛṣṇa, their aim is how to satisfy Kṛṣṇa. That is the difference. This is the difference between spiritual life and material life. Material life means everyone is trying to . . . how to satisfy his sex. And spiritual life means he is also trying the same way, but his aim is how to satisfy Kṛṣṇa.

So, my occupation to satisfy something, that will continue—you cannot stop it. But spiritual life means to satisfy Kṛṣṇa, and material life means satisfying my senses. That is the difference. So in every action if you put this test, whether you are satisfying your senses or you're satisfying your Kṛṣṇa—you can test it—and as soon as you see that you are satisfying my whims and senses, then it is not Kṛṣṇa. So in this way, put . . . make progress, and if you fail sometimes, Kṛṣṇa will excuse you. But you must be very much strict, guarding against this falldown. Then your elevation will be very quick and it will be very sound. So follow this principle of offenses . . . (end)