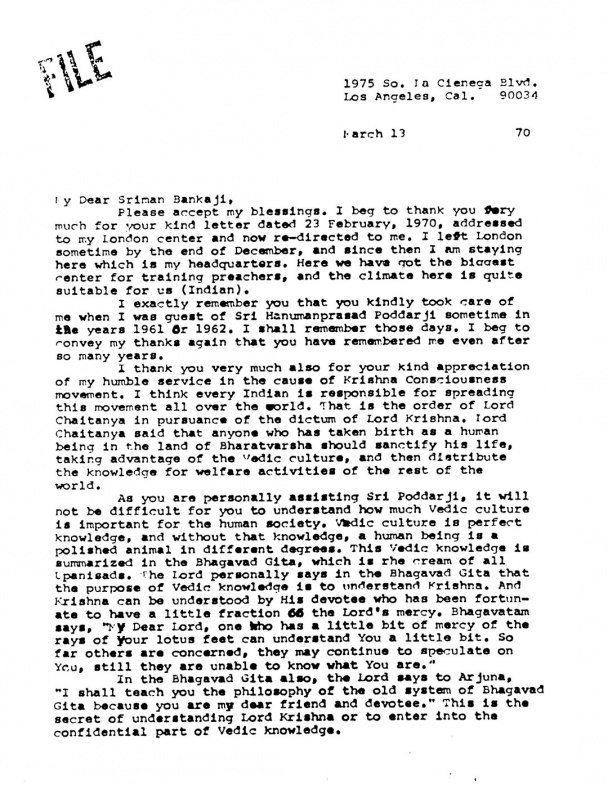 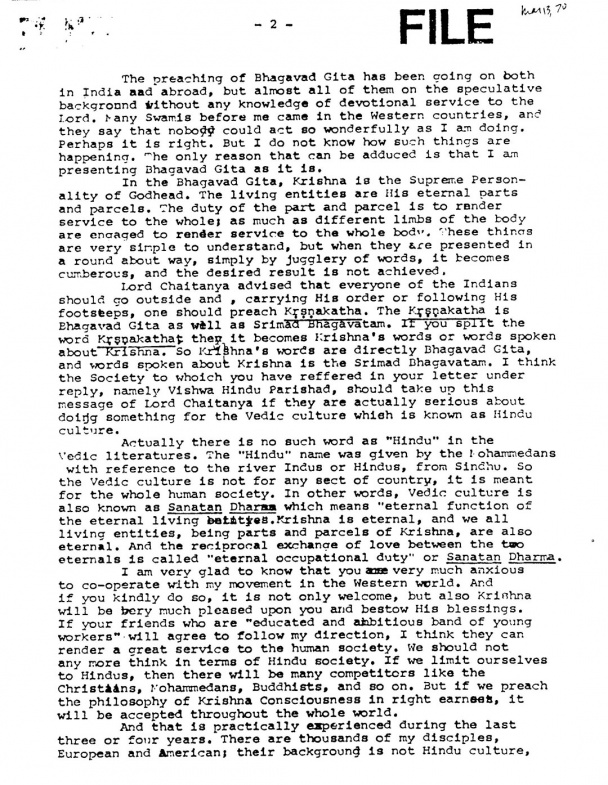 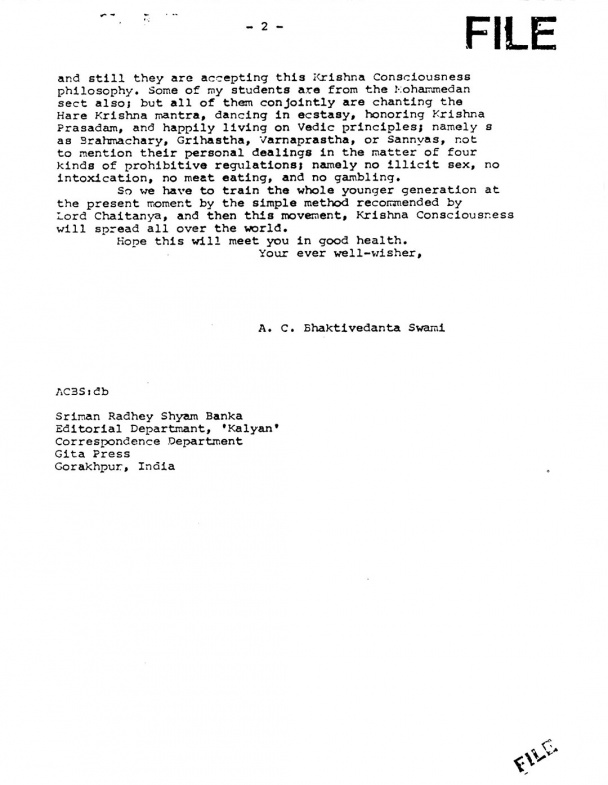 
My Dear Sriman Banka ji,
Please accept my blessings. I beg to thank you very much for your kind letter dated 23 February, 1970, addressed to my London center and now re-directed to me. I left London sometime by the end of December, and since then I am staying here which is my headquarters. Here we have got the biggest center for training preachers, and the climate here is quite suitable for us (Indian).
I exactly remember you that you kindly took care of me when I was guest of Sri Hanumanprasad Poddarji sometime in the years 1961 or 1962. I shall remember those days. I beg to convey my thanks again that you have remembered me even after so many years.
I thank you very much also for your kind appreciation of my humble service in the cause of Krishna Consciousness movement. I think every Indian is responsible for spreading this movement all over the world. That is the order of Lord Chaitanya in pursuance of the dictum of Lord Krishna. Lord Chaitanya says that anyone who has taken birth as a human being in the land of Bharatavarsha should sanctify his life, taking advantage of the Vedic culture, and then distribute the knowledge for welfare activities of the rest of the world.
As you are personally assisting Sri Poddarji, it will not be difficult for you to understand how much Vedic culture is important for the human society. Vedic culture is perfect knowledge, and without that knowledge, a human being is a polished animal in different degrees. This Vedic knowledge is summarized in the Bhagavad Gita, which is the cream of all Upanisads. The Lord personally says in the Bhagavad Gita that the purpose of Vedic knowledge is to understand Krishna. And Krishna can be understood by His devotee who has been fortunate to have a little fraction of the Lord's mercy. Bhagavatam says, "My Dear Lord, one who has a little bit of mercy of the rays of Your lotus feet can understand You a little bit. So far others are concerned, they may continue to speculate on You, still they are unable to know what You are."
In the Bhagavad Gita also, the Lord says to Arjuna, "I shall teach you the philosophy of the old system of Bhagavad Gita because you are my dear friend and devotee." This is the secret of understanding Lord Krishna or to enter into the confidential part of Vedic knowledge.

The preaching of Bhagavad Gita has been going on both in India and abroad, but almost all of them on the speculative background without any knowledge of devotional service to the Lord. Many Swamis before me came in the Western countries, and they say that nobody could act so wonderfully as I am doing. Perhaps it is right. But I do not know how such things are happening. The only reason that can be adduced is that I am presenting Bhagavad Gita as it is.
In the Bhagavad Gita, Krishna is the Supreme Personality of Godhead. The living entities are His eternal parts and parcels. The duty of the part and parcel is to render service to the whole; as much as different limbs of the body are engaged to render service to the whole body. These things are very simple to understand, but when they are presented in a round about way, simply by jugglery of words, it becomes cumbersome, and the desired result is not achieved.
Lord Chaitanya advised that everyone of the Indians should go outside and, carrying His order or following His footsteps, one should preach Krsnakatha. The Krsnakatha is Bhagavad Gita as well as Srimad Bhagavatam. If you split the word Krsnakatha, then it becomes Krishna's words or words spoken about Krishna. So Krishna's words are directly Bhagavad gita, and words spoken about Krishna is the Srimad Bhagavatam. I think the Society to which you have referred in your letter under reply, namely Vishwa Hindu Parishad, should take up this message of Lord Chaitanya if they are actually serious about doing something for the Vedic culture which is known as Hindu culture.
Actually there is no such word as "Hindu" in the Vedic literatures. The "Hindu" name was given by the Mohammedans with reference to the river Indus or Hindus, from Sindhu. So the Vedic culture is not for any sect of country, it is meant for the whole human society. In other words, Vedic culture is also known as Sanatan Dharma which means "eternal function of the eternal living entities." Krishna is eternal, and we all living entities, being parts and parcels of Krishna, are also eternal. And the reciprocal exchange of love between the two eternals is called "eternal occupational duty" or Sanatan Dharma.
I am very glad to know that you are very much anxious to cooperate with my movement in the Western world. And if you kindly do so, it is not only welcome, but also Krishna will be very much pleased upon you and bestow His blessings. If your friends who are "educated and ambitious band of young workers" will agree to follow my direction, I think they can render a great service to the human society. We should not any more think in terms of Hindu society. If we limit ourselves to Hindus, then there will be many competitors like the Christians, Mohammedans, Buddhists, and so on. But if we preach the philosophy of Krishna Consciousness in right earnest, it will be accepted throughout the whole world.
And that is practically experienced during the last three or four years. There are thousands of my disciples, European and American; their background is not Hindu culture, and still they are accepting this Krishna Consciousness philosophy. Some of my students are from the Mohammedan sect also; but all of them conjointly are chanting the Hare Krishna mantra, dancing in ecstasy, honoring Krishna Prasadam, and happily living on Vedic principles; namely as Brahmachary, Grihastha, Varnaprastha, or Sannyas, not to mention their personal dealings in the matter of four kinds of prohibitive regulations; namely no illicit sex, no intoxication, no meat eating, and no gambling.
So we have to train the whole younger generation at the present moment by the simple method recommended by Lord Chaitanya, and then this movement, Krishna Consciousness will spread all over the world.
Hope this will meet you in good health.
Your ever well-wisher,