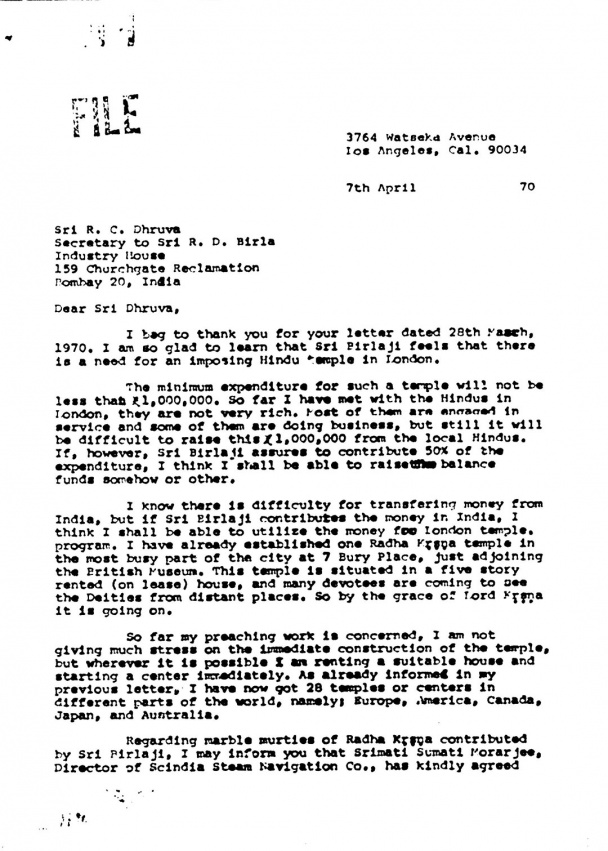 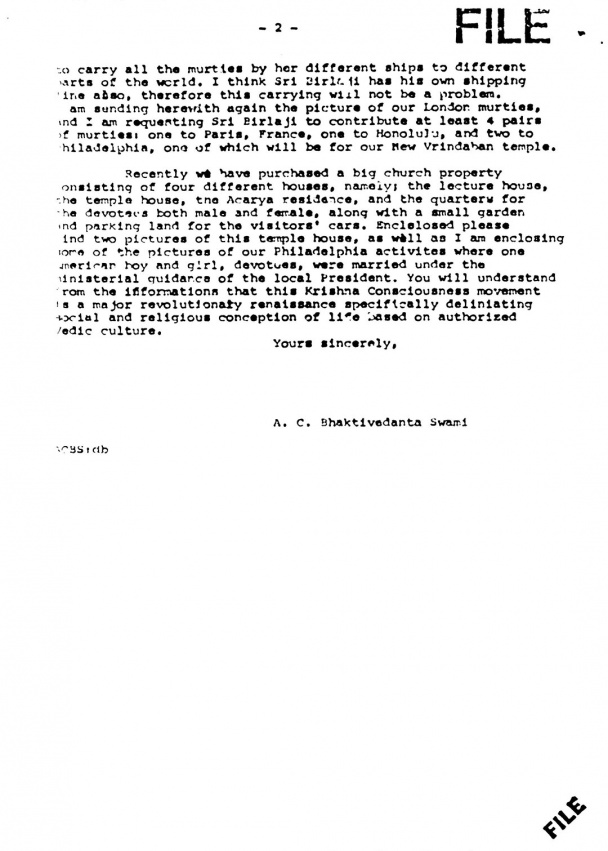 I beg to thank you for your letter dated 28th March, 1970. I am so glad to learn that Sri Birlaji feels that there is a need for an imposing Hindu temple in London.

The minimum expenditure for such a temple will not be less than L1,000,000. So far I have met with the Hindus in London, they are not very rich. Most of them are engaged in service and some of them are doing business, but still it will be difficult to raise this L1,000,000 from the local Hindus. If, however, Sri Birlaji assures to contribute 50% of the expenditure, I think I shall be able to raise the balance funds somehow or other.

I know there is difficulty for transferring money from India, but if Sri Birlaji contributes the money in India, I think I shall be able to utilize the money for London temple program. I have already established one Radha Krsna temple in the most busy part of the city at 7 Bury Place, just adjoining the British Museum. This temple is situated in a five story rented (on lease) house, and many devotees are coming to see the Deities from distant places. So by the grace of Lord Krsna it is going on.

So far my preaching work is concerned, I am not giving much stress on the immediate construction of the temple, but wherever it is possible I am renting a suitable house and starting a center immediately. As already informed in my previous letter, I have now got 28 temples or centers in different parts of the world, namely; Europe, America, Canada, Japan, and Australia.

Regarding marble murties of Radha Krsna contributed by Sri Birlaji, I may inform you that Srimati Sumati Morarjee, Director of Scindia Steam Navigation Co., has kindly agreed to carry all the murties by her different ships to different parts of the world. I think Sri Birlaji has his own shipping line also, therefore this carrying will not be a problem. I am sending herewith again the picture of our London murties, and I am requesting Sri Birlaji to contribute at least 4 pairs of murtis: one to Paris, France, one to Honolulu, and two to Philadelphia, one of which will be for our New Vrindaban temple.

Recently we have purchased a big church property consisting of four different houses, namely; the lecture house, the temple house, the Acarya residence, and the quarters for the devotees both male and female, along with a small garden and parking land for the visitors' cars. Enclosed please find two pictures of this temple house, as well as I am enclosing some of the pictures of our Philadelphia activities where one American boy and girl, devotees, were married under the ministerial guidance of the local President. You will understand from the informations that this Krishna Consciousness movement is a major revolutionary renaissance specifically delineating social and religious conception of life based on authorized Vedic culture.
Yours sincerely,