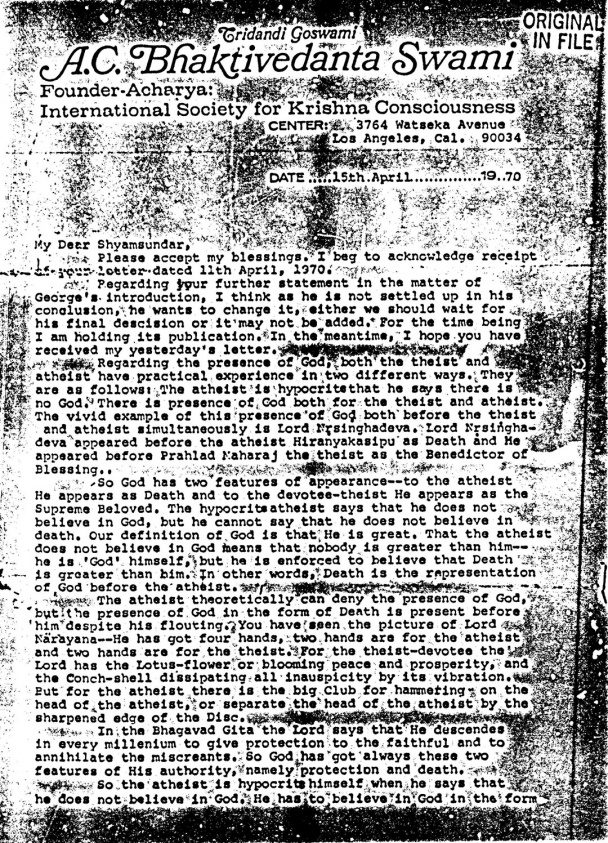 Letter to Shyamsundar (Page 1 of 2) 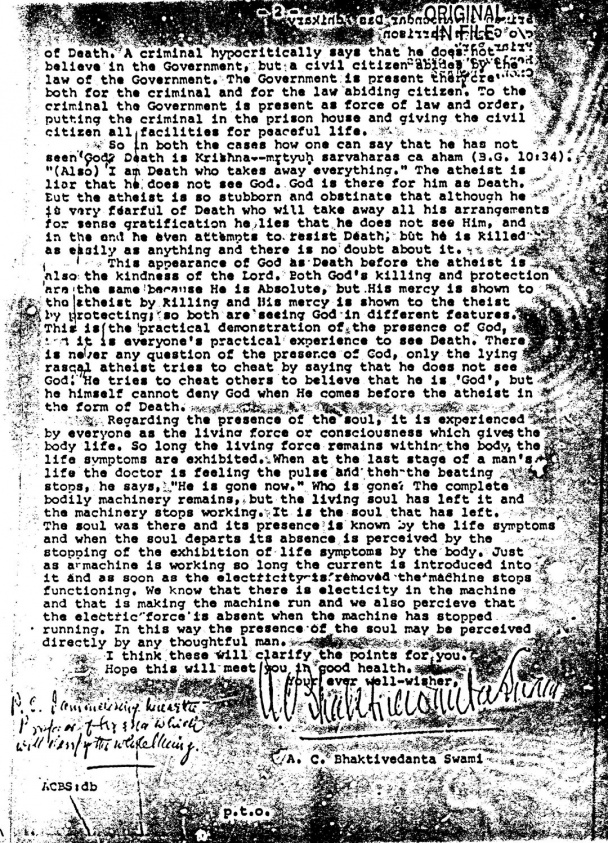 Letter to Shyamsundar (Page 2 of 2)


My Dear Shyamsundar,
Please accept my blessings. I beg to acknowledge receipt of your letter dated 11th April, 1970.
Regarding your further statement in the matter of George's introduction, I think as he is not settled up in his conclusion, he wants to change it, either we should wait for his final decision or it may not be added. For the time being I am holding its publication. In the meantime, I hope you have received my yesterday's letter.
Regarding the presence of God, both the theist and atheist have practical experience in two different ways. They are as follows: The atheist is hypocrite that he says there is no God. There is presence of God both for the theist and atheist. The vivid example of this presence of God both before the theist and atheist simultaneously is Lord Nrsinghadeva. Lord Nrsinghadeva appeared before the atheist Hiranyakasipu as Death and He appeared before Prahlad Maharaj the theist as the Benedictor of Blessing.
So God has two features of appearance--to the atheist He appears as Death and to the devotee-theist He appears as the Supreme Beloved. The hypocrite atheist says that he does not believe in God, but he cannot say that he does not believe in death. Our definition of God is that He is great. That the atheist does not believe in God means that nobody is greater than him--he is 'God' himself, but he is enforced to believe that Death is greater than him. In other words, Death is the representation of God before the atheist.
The atheist theoretically can deny the presence of God, but the presence of God in form of Death is present before him despite his flouting. You have seen the picture of Lord Narayana--He has got four hands, two hands are for the atheist and two hands are for the theist. For the theist-devotee the Lord has the Lotus-flower or blooming peace and prosperity, and the Conchshell dissipating all inauspicity by its vibration. But for the atheist there is the big Club for hammering on the head of the atheist, or separate the head of the atheist by the sharpened edge of the Disc.
In the Bhagavad Gita the Lord says that He descends in every millenium to give protection to the faithful and to annihilate the miscreants. So God has got always these two features of His authority, namely protection and death.
So the atheist is hypocrite himself when he says that he does not believe in God. He has to believe in God in the form of Death. A criminal hypocritically says that he does not believe in the Government, but a civil citizen abides by the law of the Government. The Government is present therefore both for the criminal and for the law abiding citizen. To the criminal the Government is present as force of law and order, putting the criminal in the prison house and giving the civil citizen all facilities for peaceful life.
So in both the cases how one can say that he has not seen God? Death is Krishna--mrtyuh sarvaharas ca aham (B.G. 10:34). "(Also) I am Death who takes away everything." The atheist is liar that he does not see God. God is there for him as Death. But the atheist is so stubborn and obstinate that although he is very fearful of Death who will take away all his arrangements for sense gratification he lies that he does not see Him, and in the end he even attempts to resist Death, but he is killed as easily as anything and there is no doubt about it.
This appearance of God as Death before the atheist is also the kindness of the Lord. Both God's killing and protection are the same because He is Absolute, but His mercy is shown to the atheist by killing and His mercy is shown to the theist by protecting; so both are seeing God in different features. This is the practical demonstration of the presence of God, it is everyone's practical experience to see Death. There is never any question of the presence of God, only the lying rascal atheist tries to cheat by saying that he does not see God. He tries to cheat others to believe that he is 'God'. but he himself cannot deny God when He comes before the atheist in the form of Death.
Regarding the presence of the soul, it is experienced by everyone as the living force or consciousness which gives the body life. So long the living force remains within the body, the life symptoms are exhibited. When at the last stage of a man's life the doctor is feeling the pulse and then the beating stops, he says, "He is gone now." Who is gone? The complete bodily machinery remains, but the living soul has left it and the machinery stops working. It is the soul that has left. The soul was there and its presence is known by the life symptoms and when the soul departs its absence is perceived by the stopping of the exhibition of life symptoms by the body. Just as a machine is working so long the current is introduced into it and as soon as the electricity is removed the machine stops functioning. We know that there is electricity in the machine and that is making the machine run and we also perceive that the electric force is absent when the machine has stopped running. In this way the presence of the soul may be perceived directly by any thoughtful man.
I think these will clarify the points for you.
Hope this will meet you in good health.
Your ever well-wisher,

P.S. I am enclosing herewith
the Preface of Krsna which
will [unclear] the whole thing.[handwritten]