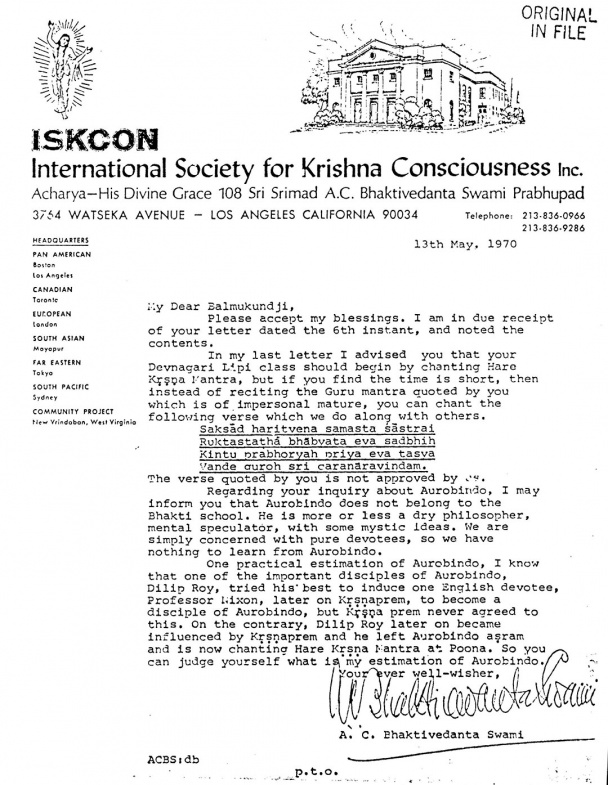 My Dear Balmukundji,
Please accept my blessings. I am in due receipt of your letter dated the 6th instant, and noted the contents.
In my last letter I advised you that your Devnagari Lipi class should begin by chanting Hare Krsna Mantra, but if you find the time is short, then instead of reciting the Guru mantra quoted by you which is of impersonal mature, you can chant the following verse which we do along with others.
saksadharitvena samasta sastrair
uktas tatha bhavyata eva sadbhih
kintu prabhor yah priya eva tasya
vande guroh sri caranaravindam
The verse quoted by you is not approved by us.
Regarding your inquiry about Aurobindo, I may inform you that Aurobindo does not belong to the Bhakti school. He is more or less a dry philosopher, mental speculator, with some mystic ideas. We are simply concerned with pure devotees, so we have nothing to learn from Aurobindo.
One practical estimation of Aurobindo, I know that one of the important disciples of Aurobindo, Dilip Roy, tried his best to induce one English devotee, Professor Nixon, later on Krsnaprem, to become a disciple of Aurobindo, but Krsna prem never agreed to this. On the contrary, Dilip Roy later on became influenced by Krsnaprem and he left Aurobindo asram and is now chanting Hare Krsna Mantra at Poona. So you can judge yourself what is my estimation of Aurobindo.
Your ever well-wisher,