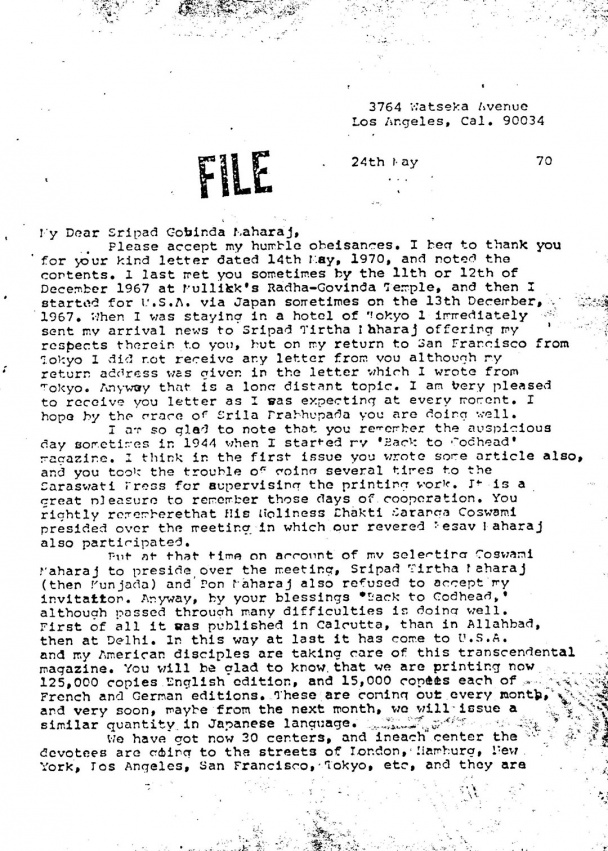 Letter to Govinda Maharaj (Page 1 of 2) 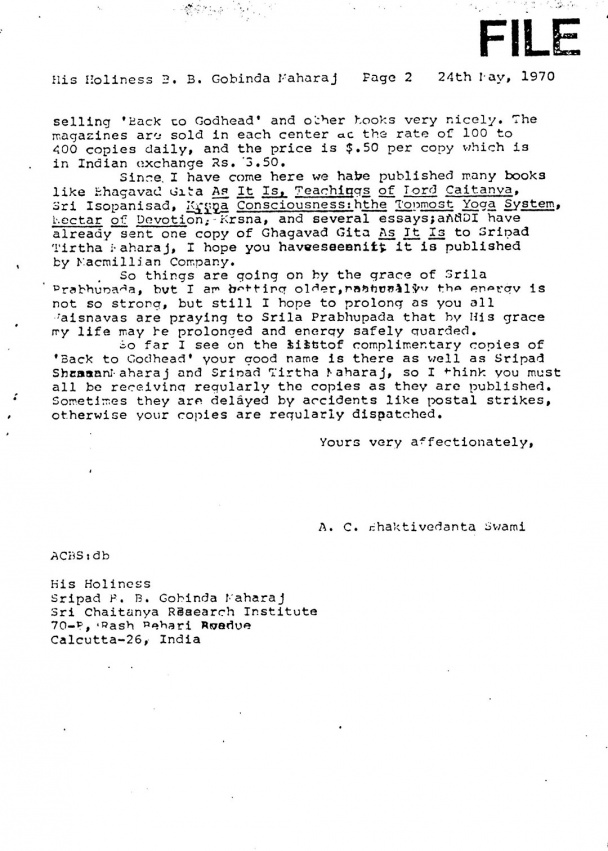 Letter to Govinda Maharaj (Page 2 of 2)


My Dear Sripad Govinda Maharaj,
Please accept my humble obeisances. I beg to thank you for your kind letter dated 14th May, 1970, and noted the contents. I last met you sometimes by the 11th or 12th of December 1967 at Mullick's Radha-Govinda Temple, and then I started for U.S.A. via Japan sometimes on the 13rd December, 1967. When I was staying in a hotel of Tokyo I immediately sent my arrival news to Sripad Tirtha Maharaj offering my respects therein to you, but on my return to San Francisco from Tokyo I did not receive any letter from you although my return address was given in the letter which I wrote from Tokyo. Anyway that is a long distant topic. I am very pleased to receive your letter as I was expecting at every moment. I hope by the grace of Srila Prabhupada you are doing well.
I am so glad to note that you remember the auspicious day sometimes in 1944 when I started my 'Back to Godhead' magazine. I think in the first issue you wrote some article also, and you took the trouble of going several times to the Saraswati Press for supervising the printing work. It is a great pleasure to remember those days of cooperation. You rightly remember that His Holiness Bhakti Saranga Goswami presided over the meeting in which our revered Kesav Maharaj also participated.
But at that time on account of my selecting Goswami Maharaj to preside over the meeting, Sripad Tirtha Maharaj (then Kunjada) and Bon Maharaj also refused to accept my invitation. Anyway, by your blessings 'Back to Godhead' although passed through many difficulties is doing well. First of all it was published in Calcutta, than in Allahabad, then at Delhi. In this way at last it has come to U.S.A. and my American disciples are taking care of this transcendental magazine. You will be glad to know that we are printing now 125,000 copies English edition, and 15,000 copies each of French and German editions. These are coming out every month, and very soon, maybe from the next month, we will issue a similar quantity in Japanese language.
We have got now 30 centers, and in each center the devotees are going to the streets of London, Hamburg, New York, Los Angeles, San Francisco, Tokyo, etc, and they are selling 'Back to Godhead' and other books very nicely. The magazines are sold in each center at the rate of 100 to 400 copies daily, and the price is $.50 per copy which is in Indian exchange Rs. 3.50.
Since I have come here we have published many books like Bhagavad Gita As It Is, Teachings of Lord Caitanya, Sri Isopanisad, Krsna Consciousness: the Topmost Yoga System, Nectar of Devotion, Krsna, and several essays; and I have already sent one copy of Bhagavad Gita As It Is to Sripad Tirtha Maharaj, I hope you have seen it, it is published by MacMillan Company.
So things are going on by the grace of Srila Prabhupada, but I am getting older, naturally the energy is not so strong, but still I hope to prolong as you all Vaisnavas are praying to Srila Prabhupada that by His grace my life may be prolonged and energy safely guarded.
So far I see on the list of complimentary copies of 'Back to Godhead' your good name is there as well as Sripad Maharaj and Sripad Tirtha Maharaj, so I think you must all be receiving regularly the copies as they are published. Sometimes they are delayed by accidents like postal strikes, otherwise your copies are regularly dispatched.