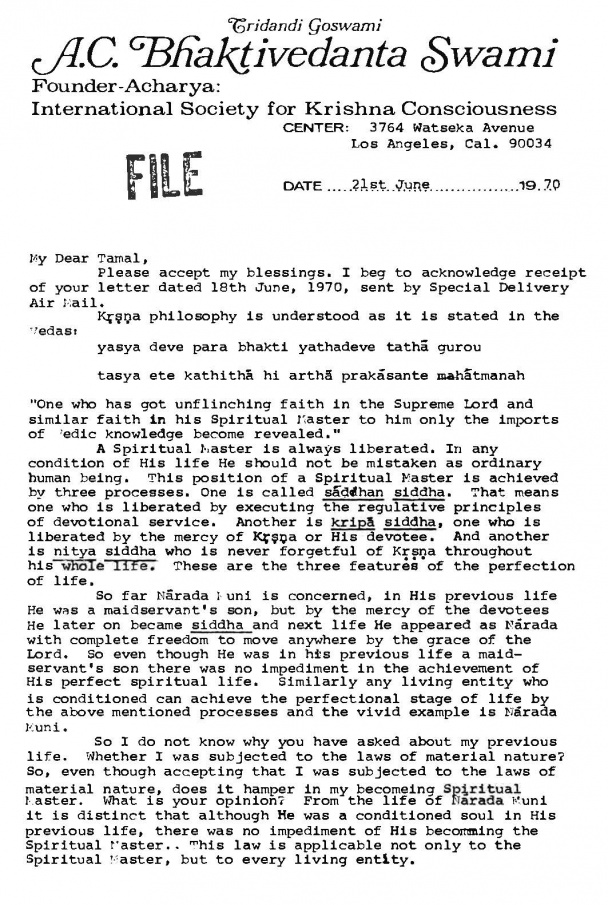 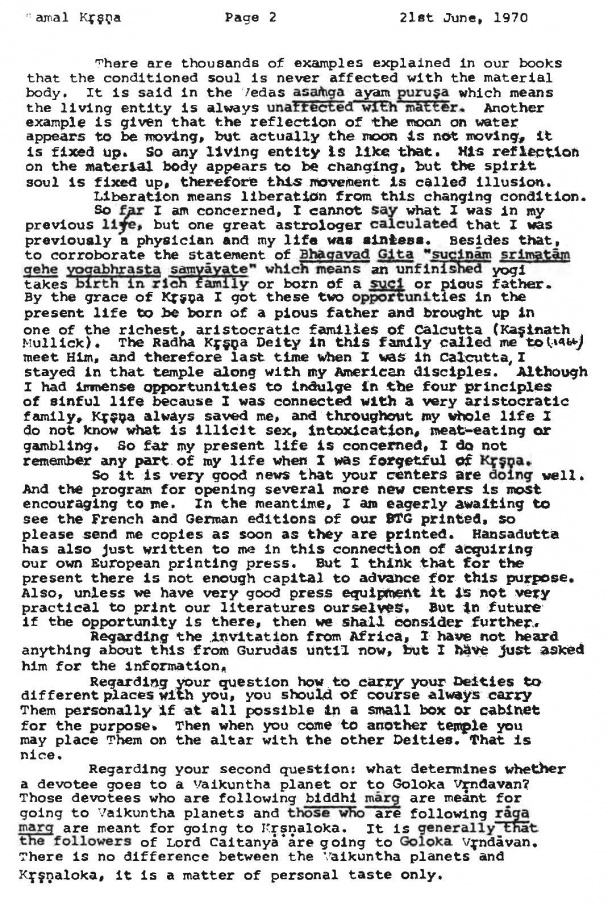 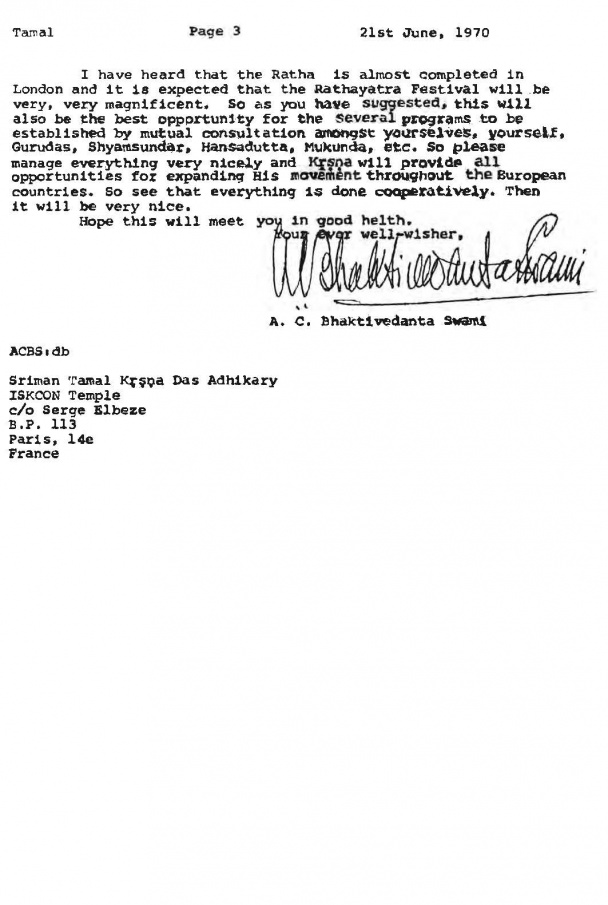 
My Dear Tamal,
Please accept my blessings. I beg to acknowledge receipt of your letter dated 18th June, 1970, sent by Special Delivery Air Mail.
Krsna philosophy is understood as it is stated in the Vedas:

"One who has got unflinching faith in the Supreme Lord and similar faith in his Spiritual Master to him only the imports of Vedic knowledge become revealed."
A Spiritual Master is always liberated. In any condition of His life He should not be mistaken as ordinary human being. This position of a Spiritual Master is achieved by three processes. One is called sadhan siddha. That means one who is liberated by executing the regulative principle of devotional service. Another is krpa siddha, one who is liberated by the mercy of Krsna or His devotee. And another is nitya siddha who is never forgetful of Krsna throughout his whole life. These are the three features of the perfection of life.
So far Narada Muni is concerned, in His previous life He was a maidservant's son, but by the mercy of the devotees He later on became siddha and next life He appeared as Narada with complete freedom to move anywhere by the grace of the Lord. So even though He was in his previous life a maidservant's son there was no impediment in the achievement of His perfect spiritual life. Similarly any living entity who is conditioned can achieve the perfectional stage of life by the above mentioned processes and the vivid example is Narada Muni.
So I do not know why you have asked about my previous life. Whether I was subjected to the laws of material nature? So, even though accepting that I was subjected to the laws of material nature, does it hamper in my becoming Spiritual Master? What is your opinion? From the life of Narada Muni it is distinct that although He was a conditioned soul in His previous life, there was no impediment of His becoming the Spiritual Master. This law is applicable not only to the Spiritual Master, but to every living entity.

There are thousands of examples explained in our books that the conditioned soul is never affected with the material body. It is said in the Vedas asamga ayam purusa which means the living entity is always unaffected with matter. Another example is given that the reflection of the moon on water appears to be moving, but actually the moon is not moving, it is fixed up. So any living entity is like that. His reflection on the material body appears to be changing, but the spirit soul is fixed up, therefore this movement is called illusion.
Liberation means liberation from this changing condition.
So far I am concerned, I cannot say what I was in my previous life, but one great astrologer calculated that I was previously a physician and my life was sinless. Besides that, to corroborate the statement of Bhagavad Gita "sucinam srimatam gehe yogabhrasta samyayate" (BG 6.41) which means an unfinished yogi takes birth in rich family or born of a suci or pious father. By the grace of Krsna I got these two opportunities in the present life to be born of a pious father and brought up in one of the richest, aristocratic families of Calcutta (Kasinath Mullick). The Radha Krsna Deity in this family called me to (1966) meet Him, and therefore last time when I was in Calcutta, I stayed in that temple along with my American disciples. Although I had immense opportunities to indulge in the four principles of sinful life because I was connected with a very aristocratic family, Krsna always saved me, and throughout my whole life I do not know what is illicit sex, intoxication, meat-eating or gambling. So far my present life is concerned, I do not remember any part of my life when I was forgetful of Krsna.
So it is very good news that your centers are doing well. And the program for opening several more new centers is most encouraging to me. In the meantime, I am eagerly awaiting to see the French and German editions of our BTG printed, so please send me copies as soon as they are printed. Hansadutta has also just written to me in this connection of acquiring our own European printing press. But I think that for the present there is not enough capital to advance for this purpose. Also, unless we have very good press equipment it is not very practical to print our literatures ourselves. But in future if the opportunity is there, then we shall consider further.
Regarding the invitation from Africa, I have not heard anything about this from Gurudas until now, but I have just asked him for the information.
Regarding your question how to carry your Deities to different places with you, you should of course always carry Them personally if at all possible in a small box or cabinet for the purpose. Then when you come to another temple you may place Them on the altar with the other Deities. That is nice.
Regarding your second question: what determines whether a devotee goes to a Vaikuntha planet or to Goloka Vrndavan?—Those devotees who are following biddhi marg are meant for going to Vaikuntha planets and those who are following raga marg are meant for going to Krsnaloka. It is generally that the followers of Lord Caitanya are going to Goloka Vrndavan. There is no difference between the Vaikuntha planets and Krsnaloka, it is a matter of personal taste only.

I have heard that the Ratha is almost completed in London and it is expected that the Rathayatra Festival will be very, very magnificent. So as you have suggested, this will also be the best opportunity for the several programs to be established by mutual consultation amongst yourselves, yourself, Gurudas, Shyamsundar, Hansadutta, Mukunda, etc. So please manage everything very nicely and Krsna will provide all opportunities for expanding His movement throughout the European countries. So see that everything is done cooperatively. Then it will be very nice.
Hope this will meet you in good health.
Your ever well-wisher,