700825 - Letter to Bali-mardana written from Tokyo 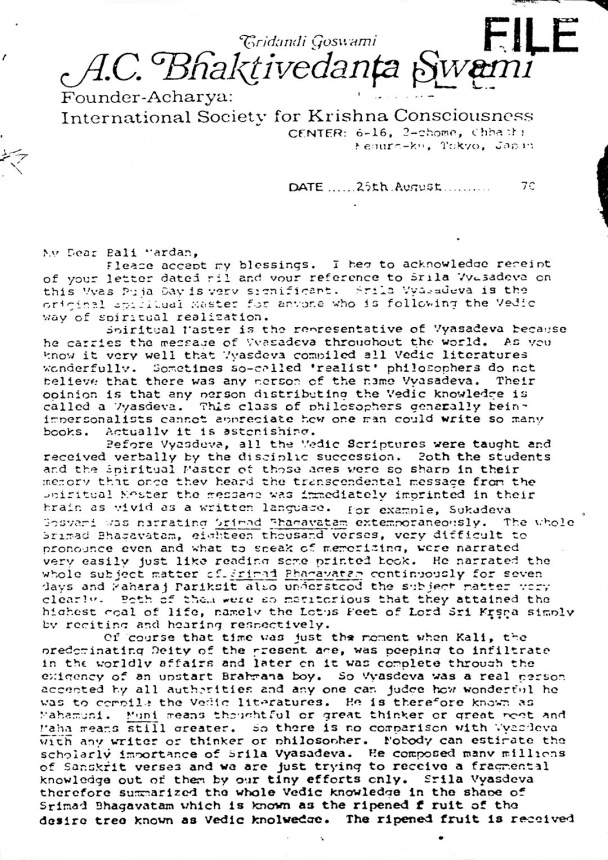 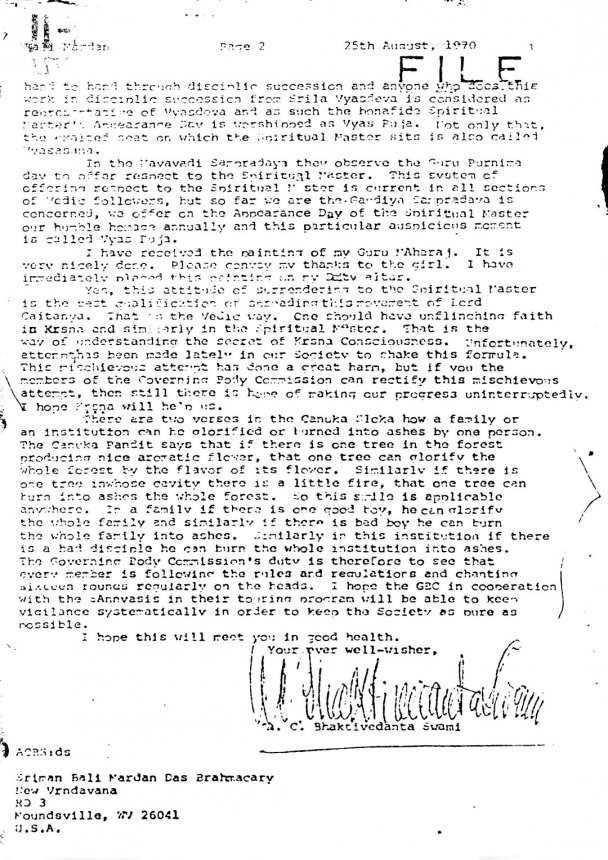 
My Dear Bali Mardan,
Please accept my blessings. I beg to acknowledge receipt of your letter dated nil and your reference to Srila Vyasadeva on this Vyas Puja Day is very significant. Srila Vyasadeva is the original Spiritual Master for anyone who is following the Vedic way of spiritual realization.
Spiritual Master is the representative of Vyasadeva because he carries the message of Vyasadeva throughout the world. As you know it very well that Vyasadeva compiled all Vedic literatures wonderfully. Sometimes so-called 'realist' philosophers do not believe that there was any person of the name Vyasadeva. Their opinion is that any person distributing the Vedic knowledge is called a Vyasadeva. This class of philosophers generally being impersonalists cannot appreciate how one man could write so many books. Actually it is astonishing.
Before Vyasadeva, all the Vedic Scriptures were taught and received verbally by the disciplic succession. Both the students and the Spiritual Master of those ages were so sharp in their memory that once they heard the transcendental message from the Spiritual Master the message was immediately imprinted in their brain as vivid as a written language. For example, Sukadeva Gosvami was narrating Srimad Bhagavatam extemporaneously. The whole Srimad-Bhagavatam, eighteen thousand verses, very difficult to pronounce even and what to speak of memorizing, were narrated very easily just like reading some printed book. He narrated the whole subject matter of Srimad Bhagavatam continuously for seven days and Maharaj Pariksit also understood the subject matter very clearly. Both of them were so meritorious that they attained the highest goal of life, namely the Lotus Feet of Lord Sri Krsna simply by reciting and hearing respectively.
Of course that time was just the moment when Kali, the predominating Deity of the present age, was peeping to infiltrate in the worldly affairs and later on it was complete through the exigency of an upstart Brahmana boy. So Vyasadeva was a real person accepted by all authorities and any one can judge how wonderful he was to compile the Vedic literatures. He is therefore known as Mahamuni. Muni means thoughtful or great thinker or great poet and Maha means still greater. So there is no comparison with Vyasadeva with any writer or thinker or philosopher. Nobody can estimate the scholarly importance of Srila Vyasadeva. He composed many millions of Sanskrit verses and we are just trying to receive a fragmental knowledge out of them by our tiny efforts only. Srila Vyasadeva therefore summarized the whole Vedic knowledge in the shape of Srimad-Bhagavatam which is known as the ripened fruit of the desire tree known as Vedic knowledge. The ripened fruit is received hand to hand through disciplic succession and anyone who does this work in disciplic succession from Srila Vyasadeva is considered as representative of Vyasadeva and as such the bonafide Spiritual Master's Appearance Day is worshiped as Vyasa Puja. Not only that, the exalted seat on which the Spiritual Master sits is also called Vyasasana.
In the Mayavadi Sampradaya they observe the Guru Purnima day to offer respect to the Spiritual Master. This system of offering respect to the Spiritual Master is current in all sections of Vedic followers, but so far we are the Gaudiya Sampradaya is concerned, we offer on the Appearance Day of the Spiritual Master our humble homage annually and this particular auspicious moment is called Vyas Puja.
I have received the painting of my Guru Maharaj. It is very nicely done. Please convey my thanks to the girl. I have immediately placed this painting on my Deity altar.
Yes, this attitude of surrendering to the Spiritual Master is the best qualification of spreading this movement of Lord Caitanya. That is the Vedic way. One should have unflinching faith in Krsna and similarly in the Spiritual Master. That is the way of understanding the secret of Krsna Consciousness. Unfortunately, attempt has been made lately in our Society to shake this formula. This mischievous attempt has done a great harm, but if you the members of the Governing Body Commission can rectify this mischievous attempt, then still there is hope of making our progress uninterruptedly. I hope Krsna will help us.
There are two verses in the Canaka Sloka how a family or an institution can be glorified or burned into ashes by one person. The Canaka Pandit says that if there is one tree in the forest producing nice aromatic flower, that one tree can glorify the whole forest by the flavor of its flower. Similarly if there is one tree in whose cavity there is a little fire, that one tree can burn into ashes the whole forest. So this simile is applicable anywhere. In a family if there is one good boy, he can glorify the whole family and similarly if there is bad boy he can turn the whole family into ashes. Similarly in this institution if there is a bad disciple he can burn the whole institution into ashes. The Governing Body Commission's duty is therefore to see that every member is following the rules and regulations and chanting sixteen round regularly on the beads. I hope the GBC in cooperation with the Sannyasis in their touring program will be able to keep vigilance systematically in order to keep the Society as pure as possible.
I hope this will meet you in good health.
Your ever well-wisher,