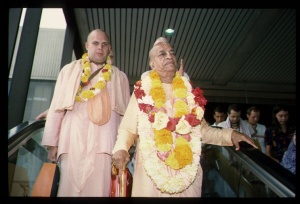 Prabhupāda: . . . Rādhāṣṭami, and birth, birthday of Śrīmatī Rādhārāṇī. This day the function is observed by fasting up to twelve noon, and then, uh, offer prasādam to the Deity, and generally in the evening, we should hold meeting discussing the Rādhā-Kṛṣṇa pastimes, especially the glories of Rādhārāṇī. Amongst the gopīs, her super-excellence . . . that is the way of observing. Rādhārāṇī's . . . fasting is up to twelve noon and after that you can take prasādam, feasting.

(pause) On that day there are three functions. First of all, Ekādaśi, a special Ekādaśi called Pārśvaika Ekādaśi. Then on that day, actually, Ekādaśi according to calendar, Ekādaśi was to be observed on the 11th September, but because the next day is Vāmana Dvādaśī . . . Vāmana Dvādaśī means the advent of Lord Vāmanadeva. Therefore we have fast, Ekādaśi fasting, and we observe two fastings in one day, Ekādaśi and Vāmanadeva, Vāmana Dvādaśī. The same process as we observe Ekādaśi, and the evening there should be a meeting discussing on the life and work of Śrīla Jīva Gosvāmī. He is one of the very important ācāryas in our sampradāya, so especially his Sandarbhas should be discussed.

If there is no such book, then the following discussion may be, take place. Śrīla Jīva Gosvāmī was a brahmacārī, he left his home at the age of 10 to 12 years. His father and two elder uncles, they left home. His father was Vallabha, and his elder uncles, Sanātana and Rūpa, or Sākara Mallika and Dabira Khāsa. So, they were all government servants, but after meeting Caitanya Mahāprabhu they decided to retire from the service, and three of them retired. Out of that, Sanātana Gosvāmī was very important officer.

Usually one has to study grammar for 12 years, and when one is very much conversant with grammatical rules, he can read any literature. That means after studying grammar, the door is open for any other subject matter, just like philosophy, medicine, then military art, there are so many Vedic knowledges. Generally they read literature, the Purāṇas, the Vedāntas and śaipa, śaipa means general literature. So Śrīla Jīva Gosvāmī became a great scholar in grammar and then he studied all Vedic literatures, and after that he approached his uncle Rūpa Gosvāmī in Vṛndāvana. He became a disciple of his uncle by proper initiation and remained with him. He was assisting his uncle and after hearing from him he composed very scholarly books know as Ṣaṭ-Sandarbha.

So Jīva Gosvāmī was so big scholar but sometimes one ordinary scholar, he approached Rūpa Gosvāmī that, "I want to discuss with you about śāstra". Rūpa Gosvāmī could understand that this man is not a devotee, he will simply waste my time. He inquired from him, "What is your purpose of discussing with me about śāstras? He said that, "I have discussed śāstras with many

(aside) You sit down.

"Big scholars and I have come victorious, so if I come victorious by discussing with you, then I will have very good fame and name." So Rūpa Gosvāmī could understand his view or his ambition that, "this man is a materialistic man, he wants some name and fame," so he told him, "All right, without discussing, if I give you certificate that I am defeated, will that do?" So, he said: "Yes, that will do."

So he gave him in writing that, "I had śāstric discussion with this man, and I found myself very much inferior and defeated." So he was very glad to take that certificate, but when he was going, Jīva Gosvāmī saw, "My dear sir, what is that paper you have taken?" "No your uncle has agreed that he was defeated, so I have got this certificate, I am going."

So he said: "Alright, let me see what he has written." So he gave him, and he kept that paper, and then he invited that, "You have defeated my uncle, but you can discuss with me also." So he agreed. So he was defeated. He was defeated and the matter was informed to Rūpa Gosvāmī that, "Your nephew and your disciple, Jīva Gosvāmī has defeated that learned scholar. So Rūpa Gosvāmī became a little angry superficially that, "Why did you bother? He was taking . . ."

So some people say that Jīva Gosvāmī was rejected on this ground by Rūpa Gosvāmī, but that is not a fact. He was very glad that Jīva Gosvāmī defeated him, but he superficially said: "Why should you take so much trouble and bother? He might have gone with that certificate." But it is the duty of the disciple that even the spiritual master, or senior ācārya, they agree to be defeated, it is the duty of the disciple to see that his spiritual master and superior is not defeated.

That is the instruction we get from Jīva Gosvāmī's behavior. This is one of the important . . . and later on when Jīva Gosvāmī established the Rādhā-Damodara temple in Vṛndāvana, but he had no sons because he was brahmacārī, so some of his gṛhastha devotee was entrusted with the management of the Rādhā-Damodara temple, and they are still going on by their descendants.

Devotee: On the calendar here it has 14th of September Advent of Śrīla Bhaktivinoda Ṭhākura, the 13th September, worship of Śrī Vāmanadeva. Fifteenth of September Viśvarūpa festival.

Prabhupāda: No, that should be 13th.

Devotee: Fourteenth is the advent of or the demise of Haridāsa Ṭhākura?

Devotee: The death, I mean the disappearance

Prabhupāda: Yes, but not for demise of Haridāsa Ṭhākura, but because that is Ananta Caturdaśī Vrata, the, generally the fasting is observed till evening, up to 5 o'clock. The next day, Viśvarūpa Mahotsava, feasting.

Devotee: On the 13th of September, Śrīla Bhaktivinoda's Appearance is there any special observance?

Prabhupāda: No, special observance means to discuss about the life and works of Bhaktivinoda Ṭhākura, that's all. Then 26th September, Ekādaśī. Then 10th October, Vijayā-daśamī, appearance date of Śrīla Madhvācārya, and the victory day of Lord Rāmacandra. So there is no fasting, but in the evening we should celebrate some feasting and discuss about the life and works of Śrī Madhvācārya as well as Rāmāyaṇa incidents where Rāma and Rāvaṇa fought.

While somehow or other, for political reasons, his father and uncle were to be arrested by the minister of the then, Muslim government, and his father and uncle hided themselves to avoid the arrest. Then the agent of the Nawab, he arrested Raghunātha Dāsa Gosvāmī. So "Tell, where is your father and uncle, otherwise you shall be tortured." So he did not answer anything, but after some time when he was in arrest, he very politely presented his case to the minister, "My dear sir, I know my uncle, father and yourself, you are very intimate friends and treat each other as brothers. So sometimes there is some quarrel between brothers, that I can understand. But so far I am concerned, I am equally affectionate to my father, uncle as well as to yourself. I am also your son."

In this way, when he very politely presented, the minister became very much affected, and he began to cry, "Yes, this boy is very nice." So he immediately released him and told him that, "Yes, we are brothers. Now if you settle up our disagreement that will be very nice." So he was released and he made a settlement between the minister and his father and uncle, so in that settlement he showed his worldly intelligence very nicely. He was not a, ah, less politician; his management was so nice.

So that means a Vaiṣṇava is not less intelligent, he can manage anything. But that does not mean that he is attached to anything. This example we get from Śrī Raghunātha Dāsa Gosvāmī. Even in his household life he managed things very intelligently, but later on he left home. He was guarded by the watchman of his father and uncle, but he somehow or other got out of their watch . . . (indistinct) . . . and directly went to see Lord Caitanya Mahāprabhu, and when Lord Caitanya Mahāprabhu saw him coming to His shelter, He very much welcomed him, and He said: "Raghunātha, you have been saved by Kṛṣṇa from the hole of stool. Your father and uncle happened to be friend of my grandfather."

Then he entrusted him to His secretary, Svarūpa Dāmodara, for his teaching, and in this way Raghunātha dāsa Gosvāmī was known as Svarūpa's Raghunātha. So, his father became very sorry that the boy has left home, and he has gone to Caitanya, they are mendicants, very hard life, how this boy will live? So immediately he sent some servants and 400 rupees. Four hundred rupees in those days a hundred times valuable than at the present moment.

So he was sending 400 rupees regularly per month and Ragunatha Dāsa Gosvāmī was accepting them, but he was spending the money by prasāda distribution to the saintly persons of Jagannātha Purī, and Caitanya Mahāprabhu was also invited, and He also used to go. But after some time, he stopped that invitation. So Caitanya Mahāprabhu inquired, "So why Raghunātha does not nowadays invite us? What is the matter? So Svarūpa Dāmodara informed Him that, "He is no more accepting the rupees sent by his father".

"Very nice, then how he is living?"

"Now he stands on the staircase of Jagannātha temple at night, and when the pūjārīs go away they give some foodstuff, and he eats that."

"No, he does not go anywhere, ask anybody, but he stands on the outside of the kitchen of Jagannātha and whatever rice is thrown from the outlet of that kitchen, while the kitchen is washed, he collects some rice and eats those rice."

So Caitanya Mahāprabhu became very much glad to hear that Raghunātha Dāsa Gosvāmī is practicing so much renunciation. So all of a sudden one day He went to his room, "Raghunātha, I did not see you for so many days." Then He found out in a pot those collected rice were kept and immediately He took it, "Oh, you have got very nice rice here," and began to eat. Raghunātha Dāsa Gosvāmī immediately caught His hand, "Sir, it is not fit for Your eating." "Oh! I am eating so nice, you say it is not fit for Me?"

That means Lord Caitanya encouraged him that, "Don't be discouraged that this is bad, or this is not fit. I can eat, anyone can eat." In this way Raghunātha Dāsa Gosvāmī was elevated to a very exalted position amongst the Gosvāmīs. He is known as Dāsa Gosvāmī because he belonged to the kāyastha family and other Gosvāmīs, they belonged to Brahmin family. Therefore, in order to keep his position as subordinate to the Brahmins, he was known as Dāsa Gosvāmī. But it does not make any difference whether a Brahmin is a Gosvāmī or a non-brahmin is a Gosvāmī, he is equally respected.

(break) . . . some of the instructions that such exalted personalities used to keep regular routine vow. Another thing that is also very difficult. At Rādhā-kuṇḍa Raghunātha Dāsa Gosvāmī did not eat every day. He would eat every alternate day, or maybe after two days, he would take a little butter, say about ten grains or twenty grains, and that was his foodstuff, and the whole day and night he would engage himself in chanting, in writing books.

He did not write many books, but some of his prayers are very famous. Some prayers, mostly he was engaged in chanting, and offering obeisances, circumambulating. Raghunātha Dāsa Gosvāmī's life is so glorious. This should be discussed on that day . . . (indistinct) . . . later on.