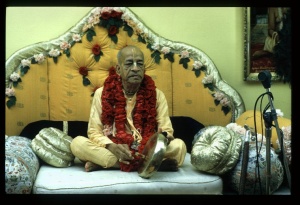 Haṁsadūta: The following speech was delivered by His Divine Grace A. C. Bhaktivedanta Swami Prabhupāda at the Lal Bhag Palace before Their Highnesses Mahārāja Tukoji Rao Holkar and Mahārāṇī Sarmistha Bhai Holkar, on December 11th, 1970, at 5 p.m., in Indore, Madhya Pradesh, India. (break)

Prabhupāda: . . . jagat-pate gopeśa gopikā-kānta rādhā-kānta namo 'stu te. Your Highness, Her Highness, and Ladies and Gentlemen, this Kṛṣṇa consciousness movement has a very intimate relationship with the kṣatriya family. Lord Kṛṣṇa says, imaṁ vivasvate yogaṁ proktavān aham avyayam (BG 4.1). Long, long years ago, He was speaking in the Battlefield of Kurukṣetra that about many, many thousands of millions of years ago He spoke the philosophy of Bhagavad-gītā to Vivasvān, the predominating deity of the sun globe.

And from Vivasvān the sūrya-vaṁśa kṣatriyas are coming. From Vivasvān, Vaivasvata Manu, because Manu is the son of Vivasvān the sun-god. And from Manu, Mahārāja Ikṣvāku descended, and he is the original king in the Raghu-vaṁśa dynasty, wherein Lord Rāmacandra took His birth. Similarly, in the Candra-vaṁśa Lord Kṛṣṇa appeared.

So from historical reference we see that when the Supreme Personality of Godhead appears on this earth, in this universe, He takes pleasure to appear in some kṣatriya family. And both Rāmacandra and Bhagavān Lord Kṛṣṇa appeared in kṣatriya families, and they acted as kṣatriya.

Kṣatriya king has got two functions. One function is to give protection and happiness to the good citizens, and another function is to kill the demons or the disturbing elements in the society. Lord Kṛṣṇa, the original form of Viṣṇu . . . Viṣṇu has got four hands. In two hands He has got the symbol of conch shell and lotus flower, and the other two hands He carries club and the cakra, sudarśana-cakra. So He wanted that a kṣatriya king like Mahārāja Yudhiṣṭhira should rule over the world. That is the practically basic idea of the whole Mahābhārata and Bhagavad-gītā.

So we are very much concerned to preach the message of Lord Kṛṣṇa, Bhagavad-gītā. We are presenting Bhagavad-gītā as it is, without any malinterpretation. We cannot interpret on the words of God. Because religion means the words of God. Dharmaṁ tu sākṣād bhagavat-praṇītam (SB 6.3.19). The principles of religion cannot be made by any human being, as much as law cannot be made by the citizens. Law is made by the government. That law is accepted. That is obligatory.

Similarly, religion means the words of God. Man-made religion has no value. The Bhāgavata says, dharmaḥ projjhita-kaitavo atra (SB 1.1.2): "Such cheating process, or pseudo religion process, is completely eradicated from Śrīmad-Bhāgavatam." Religion means obedience to the Supreme Lord. And the ruler and the king, or the chief of the government, is also accepted as representative of Nārāyaṇa.

There is a very nice incidence in this connection. Sanātana Gosvāmī, he was the prime minister of Nawab Hussain Shah, the then governor of Bengal, Pathan government. So when Sanātana Gosvāmī met Lord Caitanya, he decided to resign the government responsible post and take to this preaching of Kṛṣṇa consciousness. The Nawab, his most confidential representative was Hussain Shah.

He was known as Sākara Mallika. Formerly the brāhmin community was very strict. Because Sanātana Gosvāmī, although he was born in a Sārasvata brāhmin family, he accepted the service of a Muhammadan king, he was rejected from the Brahmin society, so practically he became Muhammadan. His name was Sākara Mallika; name was also changed. But this Sākara Mallika later on decided that he would propagate the Kṛṣṇa consciousness movement started by Lord Caitanya.

So when he wanted to resign, the Nawab was very much sorry, because he was right-hand man. He frankly said that, "I am engaged with sporting and so many other proclivities, and you are my only representative to rule over the country. If you resign, then I shall be in great danger. I cannot accept your resignation."

Then he said: "Your majesty, I am sorry. I cannot proceed any more. I shall retire from the service." Then Nawab said that, "Then I shall punish you. I shall immediately arrest you. I cannot let you go." The answer of Sanātana Gosvāmī was that "You are king, representative of Nārāyaṇa, so whatever punishment you give, I shall accept."

So that was the Hindu culture, that in spite of being punished by the king, he accepts the king as the representative of Nārāyaṇa. And actually, the . . . Kṛṣṇa, the Supreme Lord, He is the proprietor of everything. Bhoktāraṁ yajña-tapasāṁ sarva-loka-maheśvaram (BG 5.29).

So the Vedic civilization accepts the king or the ruler as representative of God, and he is given the . . . not only in India; in other countries also, so far we know, in England also the royal family, the king and the queen, is given respect as good as to the God. In every country, in Japan also. That was the system all over the world, the relationship between the citizen and the king.

Gradually, with the progress of the Kali-yuga, Mahārāja Parīkṣit was the last kṣatriya king to give protection all over the world. And when he was cursed by a Brahmin boy, his father regretted that, "My dear boy, you have brought a scar amongst the Brahmin society by cursing a king like Mahārāja Parīkṣit."

So Mahārāja Parīkṣit was protected by Kṛṣṇa. He could counteract it, but still, he tolerated that punishment, or the curse given by a Brahmin boy. He immediately resigned from his royal throne, handing over the charge to his son, and he retired on the bank of the Ganges, although he had only seven days' time to live. And during those seven days the whole Bhāgavata was recited.

So, I mean to say, the royal family has got very intimate relationship with Kṛṣṇa consciousness. And as soon as that was broken—because sometimes it breaks—the religious process declined and the royal power also declined. That is the whole history of the world.

Now, at the present moment, we have started this Kṛṣṇa consciousness movement from the Western world so that people may become again happy and come to their original consciousness. And that is being accepted by the Western world. I have got within four years forty-two branches all over the world. In America especially, practically in every principal city, I have got a branch. Especially in Los Angeles and New York we have got the biggest temple. And in England also, London, we have got our temple, 7 Bury Place.

When your Highnesses may visit London or New York or Los Angeles—most probably you visit London occasionally—I invite you to our temple at 7 Bury Place near the British Museum. It is very prominent place. And this girl in front of you, Śrīmatī Yamunā devī, she and her husband, Gurudāsa, is in charge of the temple. But because I have come to India, they are assisting me. She has seen the Prime Minister also, Indira Gandhi. She is very much impressed with the saṅkīrtana movement.

So this Kṛṣṇa consciousness and patronization by the royal family is very old relationship. So I came especially in Indore to see Your Holinesses . . . er, Highnesses, that if you give us some shelter we can immediately open a branch of Kṛṣṇa consciousness movement. I have brought with me forty American, European, Canadian students, and they will be exemplary teachers. You can see from their faces how they are advanced in spiritual consciousness, how they have accepted these principles of Vaiṣṇavism.

They are no longer meat-eaters. They don't touch meat, egg or fish, nothing of the sort. They have given up drinking habit or any kind of intoxications. They do not accept even tea, coffee and cigarette, and they do not take part in gambling, neither they have any illicit sex life. And they are observing Ekādaśī days and other Vaiṣṇava festivals like Janmāṣṭamī, Śrī Rāma-navamī, and every temple, they are following the same principles. And gradually we are increasing the number. The Western boys and girls, my students, are all between twenty and thirty years old. You will find none of them more than twenty-five, twenty-six years old. So they are . . . in Japan also. Here is a Japanese boy also.

So the world is taking very serious situation. All over the world they are appreciating. Your Highnesses will be pleased to see how many books we have published. Perhaps you have seen one of them, Kṛṣṇa. That is published in two parts. We have got our magazine, Back to Godhead, in five languages: English, French, German and Japanese, Hindi and Bengali. Of course, Bengali is going to be out. Hindi is already out.

So we are doing these activities, and we have a mind that we may open a center in a nice city like Indore under your patronization. Although I know that at the present moment the time is different; still, if you like, you can help us in so many ways. In our Indian parable it is said that, "A dead elephant is also one lakh of rupees." Elephant, living or dead, still, it is valuable. Mara hati laksa.

So this movement, from very old days, beginning from that sun-god, and again five thousand years ago between Lord Kṛṣṇa and the Pāṇḍavas, the pious kings . . . so this movement has got very intimate relationship with the kṣatriya kings. So I would request Your Highness . . . both, you are sitting, if you kindly give us a little place here in Indore, we can immediately start a nice center.

And this Kṛṣṇa consciousness movement is essential. In the Śrīmad-Bhāgavatam it is said that:

That, "If anyone has got devotion to the Supreme Personality of Godhead, then he develops all the good qualities." Just like Sanātana Gosvāmī. Because he was a devotee, he did not distinguish the king, whether he was Muhammadan or Hindu. He immediately accepted that, "You are representative of Kṛṣṇa." That is the version.

Arjuna, because he was a devotee, although he was in the battlefield, he was insulted, his wife was insulted, his kingdom was usurped, still, he said: "Better not to fight and kill my kinsmen." That goodness was not found on the other side, Duryodhana. Because Arjuna was a devotee, he was compassionate with his brothers, not to kill them. But Kṛṣṇa wanted that this fighting must go on because He wanted to install Mahārāja Yudhiṣṭhira, the pious king, on the throne.

So these two classes of men . . . Dhīrādhīra-jana-priyau. Kṛṣṇa consciousness movement is so nice that we can please both classes of men, the dhīras and the adhīras. Anyone we invite. I have spread this movement not restricting them, that "You can enter in my class after being qualified."

No. Whatever you are, come. Dhīrādhīra. You come, chant, have musical instruments, plays, enjoy, dance, take prasādam and go home. And if you like, you read literatures, if you are intelligent. So everything was given to them. And they are American boys and girls. They are intelligent, qualified. So they are coming. (break) (end)