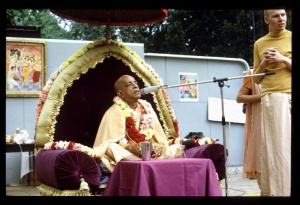 Devotee: Prabhupāda if you don't have any kind of tilaka can you put on with water.

Devotee: If you don't have tilaka.

Prabhupāda: Why you? Why you will not have? You carry tilaka. Why water?

Prabhupāda: No there is a technical name.

Prabhupāda: Mādrī? What is that name? You never. You have left it? All right. Paraṁ dṛṣṭvā nivartate (BG 2.59).

Prabhupāda: Eh? Lady purse. That's all right. So you carry something like that. And you know there is no . . . (indistinct) . . . Just like we do sometimes, sometimes in aeroplane. You have to do that. Keep always a trademark. And our trade is Kṛṣṇa business.

Indian: Available in the markets.

Prabhupāda: Which is known as also Multan Muskit. So there is agreement, so keep a little small mirror. And a piece of. There is no . . .

Prabhupāda: Oh yes. But. My Guru Mahārāja without mirror he could, and what is there? We can do also. . . . (indistinct)

Prabhupāda: Yes. Eh? There is this, tilaka, ūrdhva-puṇḍra. This is for Vaiṣṇavas or demigods. And this is for the demons.

Those who are devotees of Viṣṇu, they are devatās. And those who are opposite number, maybe devotees of anyone else. Very good man but he was a demon. Viṣṇu-bhakto bhaved daiva āsuras tad-viparayāt, anyone who is not a Viṣṇu bhakta, he is a demon. What is that?

Prabhupāda: Yes, so if we tell the truth there is demoniac.

Prabhupāda: Yes. So it doesn't matter whether a sannyāsī. Rāvaṇa was also sannyāsī his purpose was to kidnap Sītā. Is it not? He was . . . he kidnapped Sītā in the dress of a sannyāsī. Therefore he is a demon.

Prabhupāda: (Hindi: That was what we spoke about.)

Prabhupāda: Prahlāda Mahārāja says like that, "My dear Lord, you are trying to give me material benefits, thank you very much. But I have seen my father was so materially powerful that simply by seeing his angry eyes the demigods would faint. But you have seen it, they want it. So what is the value of this, why you are offering this." So that . . .

What is the value of this material benefit, it is known to the devotees. Therefore it is said that they are not interested. They are simply interested in serving the lotus feet of Kṛṣṇa. That is their only offer. They are no more interested in anything else. And that is mukti, when one is situated in that position that he has no more anything to do with anything else except Kṛṣṇa. That is . . . he is immediately liberated.

Prabhupāda: Eh? fifth canto? What is his question?

Prabhupāda: Speak one. Either you speak or they speak. Why you take two? What is the question? I cannot understand. What is that?

Devotee: He wants to know what Canto, what Ajāmila story is from.?

Prabhupāda: Oh, sixth Canto. That's all right. I could not follow the Ajāmila pronunciation. Therefore I was puzzled.

Prabhupāda: Yes . . . now at college, there was one Mr. Carmichael. He was Scotsman. So all the Scotsman they used to say dyuty. Not duty. Buety, that is for beauty.

Prabhupāda: So this pronunciation, that trouble is our. There is a secular place I think they are different soldiers from different provinces. They were speaking and nobody could understand. There was a trouble. What is that book? King Lear or something. These difficulties are always there. Even in India the pronunciations are different . . . no one can tell you. (end)