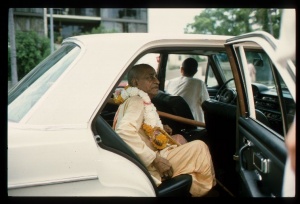 (break) The conclusion is:

That one who is engaged in chanting the holy name, for him this is the special facility. What is that? It is guaranteed that he'll never go to the hellish condition of life. That is guaranteed. He's not degrading to the lowest stage of life, in animal life, or a life of ignorance, lower-born of human life, but he will gradually make progress. And it is also guaranteed that the Yamadūta, the servants of Yamarāja, will never come to see him or he will never see them. They will be out of sight. This is the result.

And, yajñati ananyalo mattaḥ: although this material existence is always inauspicious, a person who is engaged in chanting the holy name, he is always living in the Viṣṇu-loka. He's not living in this material world. That we have several times explained, that if you chant without offense, yatra ananyalo mad-bhakta tatra tiṣṭhāmi, so immediately you create a Vaikuṇṭha-loka, because Kṛṣṇa is coming. When Kṛṣṇa is coming, Viṣṇu is coming; wherever Kṛṣṇa goes, that is Vaikuṇṭha. Just like it is stated in the Bhagavad-gītā, īśvaraḥ sarva-bhūtānāṁ hṛd-deśe 'rjuna tiṣṭhati (BG 18.61).

So Kṛṣṇa, or the Supreme Lord, is living everyone's hearts. So there are cats, dogs and hogs—they are also living beings, living entities—so Kṛṣṇa is living in their heart also. But that does not mean He is living with the hog in the abominable condition. He has His own Vaikuṇṭha. Wherever He goes is Vaikuṇṭha. Similarly, when one chants, that chanting . . . there is no difference between the holy name and Kṛṣṇa. And Kṛṣṇa says that, "I live there where My pure devotees chant." So when Kṛṣṇa comes, when Kṛṣṇa is on your tongue, how you can live in this material world? It is already Vaikuṇṭha, provided your chanting is offenseless.

This is the last conclusion, that Ajāmila actually did not mean to chant the holy name of the Supreme Personality of Godhead, but some way or other his son's name was Nārāyaṇa, he called his son. The name is so powerful that even without aiming or objecting to the Supreme Personality of Godhead, because the name was there, therefore ajāmilo 'py agād dhāmam: he was promoted to the spiritual kingdom. Kim uta śraddhayā gṛṇan: then what to speak of such persons who are actually trying to chant the holy name without any offense.

This is the conclusion, that Ajāmila never meant that he was going to chant the name of Nārāyaṇa actually, but he was calling his son, whose name was Nārāyaṇa. That means it was almost neglectfully done. So even by neglectfully doing or chanting the holy name has got so much power, and what to speak of others who are very faithfully and, hmm, observing the rules and regulation without any offense, those who are chanting—what to speak of them? That is the thing.

Similar instance is there in the Nṛsiṁha Purāṇa: one mleccha, yavana . . . from it appears the mleccha-yavana was at that time also, because the mleccha-yavana is Muslims; they hate the animal hog. They call it haram. Haram means "abominable." So one boar attacked him, and while he was dying he called this abominable "haram, haram," that simply ha-ram means "O Rama." So although he did not mean it, but it became "O Rama," and he was immediately promoted to the spiritual kingdom. So that is the power of chanting Hare Kṛṣṇa mantra. Iti srimad-bhagavate maha purane paramahamsa sangita . . . (indistinct) . . . ajāmilam vakhyana

So this is the second chapter of the history of Ajāmila's activities. Now we are going to the third chapter: Rājovāca. Then after hearing this incident, Mahārāja Parīkṣit is inquiring from Śukadeva Gosvāmī, because the talk was between Śukadeva Gosvāmī and Mahārāja Parīkṣit. Parīkṣit inquired about the different types of hellish condition of life and how they could be avoided. So in question . . . in answer to that question, this Ajāmila itihasa, history, was spoken. Now again the king was inquiring. Rājovāca—the king inquired:

Yamarāja is one of the twelve authorities. It is said that we have to follow the footsteps of authorities—mahājano yena gataḥ sa panthāḥ (Mahābhārata, Vana-parva 313.117 quoted in CC Madhya 17.186). It is very difficult to find out the real path how to realize perfection of life, but it is advised that if you simply follow the footsteps of the great personalities, authorities, or their representatives, then you will be led to the perfectional stage. Mahājana.

This is not the process to understand the transcendental subject. There is no profit. The Vedas says, therefore, you should approach an authority, tad vijñārthaṁ sa gurum evābhigacchet (MU 1.2.12). If you are actually serious about understanding the transcendental knowledge, then you must approach an authority, representative of the authority. So, tarko ‘pratiṣṭhaḥśrutayo vibhinnā.

Now yesterday when we were speaking on the Bhagavad-gītā, the commissioner Mr. Trivedi, he inquired that: "Why not the Upaniṣads?" He has no knowledge that Upaniṣads are different from Bhagavad-gītā. They're not different. The Upaniṣads, they're a part and parcel of the Vedas, and in the Upaniṣads also the aim is Kṛṣṇa. But they are meant for the impersonalist and all less . . . poor . . . persons with poor fund of knowledge. So in the Upaniṣads it is stated aiming at the Supreme Personality of Godhead, but it is trying to convince the reader that the personality of God is not exactly the personality as we are.

This portion is very elaborately stated in the Upaniṣad. But in the beginning it is accepted that Īśa, or the Supreme Lord, He is the proprietor of everything. He's everywhere. He's everywhere pervading: īśāvāsyam idam sarvaṁ. Everywhere there is the authority of Īśa, the supreme controller.

Because everything is property of the supreme controller, īśā, therefore tena tyaktena bhuñjīthā.

You require something to keep up your body and soul together. You should accept the prasādam, whatever is offered and allotted to you by Him. Don't encroach upon others' property. This is the first instruction, accepting the Supreme Personality of Godhead. And in the last verse of Īśopaniṣad it is said, "My dear Lord, Your effulgence may be wound up so that I can see You properly, I can offer my respects, I can see Your real face."

So the impersonalists, they are amazed with the glaring effulgence of the rays emanating from the transcendental body of Kṛṣṇa. But those who are intelligent—they say that, "Please wind up this effulgence. Because of this effulgence I cannot see You properly." Just like to see the sun glow, sometimes you have to use a certain class of glass to avoid the effulgence. If you see through that glass, you can properly see. It is . . . this class of glass is used. I do not know whether it is used in your country, but when there is eclipse in the sun we use such kind of glass to see how much the sun is already covered by the eclipse.

So this impersonalist, they are, I mean to say, amazed simply by this glaring effulgence of the Supreme Personality of Godhead. So they think that Upaniṣad is impersonal. No. Upaniṣad (is not) impersonal. It is . . . just like Vedanta. The impersonalist explain in that way, in their own way. Otherwise it is not impersonal. Similarly, Upaniṣads also, not impersonal. But it is not this material process. That is the verdict of all Vedic literature.

Just like Kṛṣṇa says Himself, avajānanti māṁ mūḍhā mānuṣīṁ tanum āśritam (BG 9.11): "Because I have appeared on this planet exactly like a human being, these mūḍhās, these rascals, those who cannot understand what is the Personality of Godhead, they deride." They think because Kṛṣṇa is a person, therefore He is inferior to Brahman effulgence. Their theory is the Brahman is the ultimate: impersonal Brahman is the ultimate Absolute Truth, but when Brahman comes as incarnation, He accepts a material body.

So here it is enquired, niśamya devaḥ sva. So the question, Yamarāja . . . whatever has been said here, this is to be confirmed by the mahājana, the authority. Whatever you do, if it is sanctioned by the authority, then it is all right. So Yamarāja is one of the authorities, so we are explaining, tarko ‘pratiṣṭhaḥśrutayo vibhinnā.

Nāsāv ṛṣir yasya mataṁ na bhinnam (Mahābhārata, Vana-parva 313.117 quoted in CC Madhya 17.186): and a philosopher, a thoughtful man, he is not a thoughtful man if he does not disagree with another thoughtful man. This is the material world. Scientist also. One scientist establishes one theory; another scientist, if he can refute such theory, then he becomes big. Similarly, philosophers also.

One philosopher theorizes something; another philosopher, if he can refute such theories, then he becomes . . . (indistinct) . . . nāsāv muni yasya. A muni and a thoughtful philosopher . . . the idea is you cannot get the truth from the so-called philosophers and the scientists, because they always disagree. Nāsāv muni yasya mataṁ na.

Without following the Gosvāmīs, who are expert, directly instructed by Lord Caitanya, nobody can understand what is rādhā-kṛṣṇa-līlā. It is not possible. Persons who try to understand rādhā-kṛṣṇa-līlā directly, because it appears the dealings of young man and woman, they like it very much. Instead of studying other pastimes of the Lord, they go directly to the rādhā-kṛṣṇa-līlā, and the result is they're misled, and they become sahajiyā.