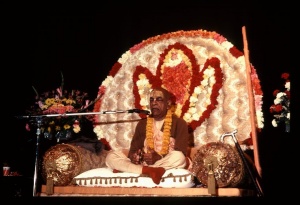 So after hearing from Prahlāda Mahārāja the sons of the demons, they said that, "You have stated that your knowledge was received from Nārada. It appears to be little astonishing because, so far we are concerned, we do not know any other teacher than Ṣaṇḍa and Amarka." Two teachers were appointed for instructing Prahlāda Mahārāja, their names were Ṣaṇḍa and Amarka and these two teachers were strictly prohibited by Hiraṇyakaśipu not to talk anything about Kṛṣṇa.

When Prahlāda Mahārāja was chanting Hare Kṛṣṇa the two teachers were called for, "Why you have taught all this nonsense to my son?" The teachers replied, "My dear Sir, we do not teach this boy Hare Kṛṣṇa but naturally he chants Hare Kṛṣṇa. We do not know what is the cause." And after that Hiraṇyakaśipu decided that some of the men of Hare Kṛṣṇa party must be stealthily coming to Prahlāda and have had instructed him about this Kṛṣṇa consciousness. So he tried to chastise him in different ways even by putting him on the fire or dropping him from the top of the hill, throwing him underneath the legs of an elephant, putting him amongst the snakes, in so many ways he wanted to stop him, but he was unsuccessful.

"First thing is that your father has appointed only these two teachers and he is very strict not to allow you to meet any other one, neither it was possible for you to go from the palace anywhere to learn these transcendental subjects. So how can we believe that you have learned this transcendental Kṛṣṇa consciousness from Nārada Muni?" This was their question.

In this chapter Prahlāda Mahārāja will describe how he learned from Nārada Ṛṣi spiritual instruction even from within the womb of his mother.

So Prahlāda Mahārāja describes that there was fight between the demons and the demigods. So his father was leading the demons' party, he was the leader of the demons but this side, the demons, were defeated very heavily. So much so that being afraid of being killed they left their homes, left their wealth and everything and they fled away, yudhā parām.

Nāvekṣyamāṇās tvaritāḥ sarve prāṇa. All these paraphernalia are very attractive for a materialistic person but being afraid of their life they did not care for all these attractions, left home and fled away.

So the demon, kings, were practically lost of everything and the demigods, being too much encouraged by the defeat of the demons, they attacked all their camps and tents in the battlefield. That is the way after the battle, the victory is owed. The victorious party, they plunder the defeated party. I think this system is still going on in the modern age. This is called "booty".

Prabhupada: They do that. I have seen one picture during the war, of course that was a manipulated picture, the soldiers were raping. Not only that, I have seen, in my childhood that the British soldiers were let loose and they used to go to the village and they used to rape any village woman as soon as they got some opportunity. The officers are supplied with the nurses. The so-called nurse means to satisfy the sex desires of the officers.

They take so many nurses in the battlefield, not for the purpose of giving nursing needs, wounded soldiers, but for satisfying the sex desires of the officers, that's all. And the general, ordinary soldiers, wherever they will have their camp, they will be allowed to go in the town and villages and capture any women and rape it. They're given. They're given wine and they are given flesh and facility for raping women just to keep them alive. This is the way of modern fighting.

So anyway the, that system was not at all absent in those days. So this . . . he says, Prahlāda Mahārāja says here:

Indra, Indra was the leader of the demigods. Prahlāda Mahārāja says that, "Indra, the king of heaven, personally attacked my mother. Personally:"

Caught hold. "Where you are going?"

So when Indra was forcibly taking away Prahlāda's mother, dragging her, and she was crying. At that time, all of sudden Nārada Ṛṣi was passing that way and he appeared on the scene.

"Oh Indra, what you are doing? You are touching a woman who is already married?" Eh? The idea is that the kṣatriyas they can forcibly take away an unmarried girl, that is allowed. But they are forbidden to touch even, a married girl. So Nārada Ṛṣi, as soon as he saw that Indra was dragging Prahlāda's mother, so immediately he objected, "What is this?" Naināṁ sura-pate netum arhasy anāgasam. "Oh, this is not good for you because she is innocent, anāgasam. Arhasy anāgasam—without any fault. She is woman, married, without any fault and you are dragging. No, no, don't do this. Immediately release her, release her." Mahā-bhāga—"Oh you are so great, you should not do this." Satīṁ mahā-bhāga. Satīṁ—"And this woman is chaste, you can not touch."

Then śrī-indra uvāca. After Indra being checked by Nārada he replied:

Indra says: "So for arresting this woman there is no other purpose, don't think that I shall misbehave with her. No, that's not the point. But she has. She is pregnant." Āste 'syā jaṭhare vīryam—"The semena of the demon Hiraṇyakaśipu is there within her womb. Vīryam aviṣahyaṁ sura-dviṣaḥ—"And therefore the child which is growing within her womb must be a great enemy of the demigods." Āsyatāṁ yāvat prasavaṁ—"Therefore I want to keep under my vigilance. I want to keep her under my vigilance until she gives birth to the child. There is no other purpose. So I want to arrest her."

So his father has gone to Mandarācala Hill for undergoing severe austerities and penances. Hiraṇyakaśipu being defeated, he was not disheartened, he left his wife, children, home, wealth, everything and went to the forest to undergo austerities so that he may get power to kill the demigods. So in this case after severe austerities he got perfection so much so that Lord Brahma himself came to him. "What is your purpose of undergoing such severe austerities?" Then he asked that, "Make me immortal." That was not possible. That is different story.

So, āste 'syā jaṭhare vīryam. So Indra's reply was that, "I am just taking away this woman under my custody to see that the child-demon which is already in the womb of this woman. She is pregnant, as soon as the child-demon comes out we will kill and then let her go away anywhere she likes.

So the purpose of the—Kaṁsa the demon was planning to kill Kṛṣṇa or the head of the demigods. Similarly Indra was also planning to kill the child of Hiraṇyakaśipu. That, "As soon as the child is born I shall kill. Then I'll let her go away." That's all.

And those who are opposite numbers, they are demons. And these two kinds of men in all the planets. All countries, all planets, everywhere.

Devotee: Even on upto Brahmaloka?

Devotee: Even on upto Brahmaloka?