710328 - Letter to Rupanuga written from Bombay 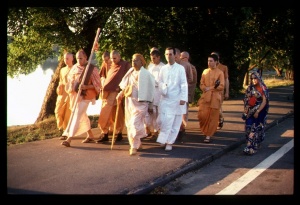 Please accept my blessings. In continuation of my last letter to you dated 23rd March, with regards to your proposal for helping the disturbed members of the greater society by Krsna consciousness, it is a very nice idea. As you know, I was also visiting the prisoners here in India for preaching this Sankirtana Movement and thus saving them from the material disaster.

We should recruit any sort of men out of the four classes; brahmana, ksatriya, vaisya, sudra. For our members we do not make any discrimination. One half of the membership fee is to go for printing of my books and one half for development of our Centers. I think we will require a huge amount of money for developing New Vrindaban scheme with seven Temples. Then it will be nice. That will be a grand success.

The boys and girls from bad backgrounds may be helped certainly by our program, but we cannot make a new program for them. They can simply come and live with us and attend Kirtana and classes as usual. We can give nice Prasadam and lectures to them and invite their questions. Counseling can be done by some experienced member.

Regarding the relocation of ISKCON Press and the accounting department, I want to see the management going on nicely; that is all. It is very encouraging that Sriman Karunamaya has opened a new Center in Amherst, Mass. Please try and maintain it very nicely. I have received the press cutting from Chicago and in India also our Movement is being appreciated as "new wave". So let our waves roll on until it reaches the great ocean of transcendental Nectar of Devotion (Bhakti-rasamrta-sindhu). The issue of "Krsna Sun" is nice. It is good. They may be distributed to our prospective Life Members, etc.

Sometimes on the "Isavasya Hour" people should chant Isopanisad; that will purify the whole atmosphere. The vedic mantra has powerful effect as good as Hare Krsna Mahamantra. I think that while in Los Angeles with me you learned the mantras and they should be practiced and chanted on the radio and television.

Hope this will meet you in good health.