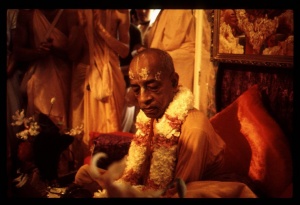 Kṛṣṇa says also in the Bhagavad-gītā, nāhaṁ prakāśaḥ sarvasya yoga-māyā-samāvṛtaḥ (BG 7.25): "I am not visible to everyone because there is a curtain which is covering the eyes of the ordinary persons, yoga-māyā," just like the cloud covering the eyes to see. One cannot see the sun in complete or in full vision when there is cloud. Similarly, māyā, yoga-māyā, has created a cloud on account of which we cannot see God.

Premāñjana-cchurita. By prema . . . prema means love. The ointment of love, when it is smeared over the eyes, then those who are devotees, santaḥ, saintly persons, they can see always Kṛṣṇa within his heart. Premāñjana-cchurita-bhakti. Antaḥ.

And bahiḥ, so far experience, that he sees everything. One who is lover of God, he can see Kṛṣṇa in everything. Whatever he sees, he sees Kṛṣṇa there, because he knows that "This thing is produced out of Kṛṣṇa's energy." Take for example a flower. A devotee sees a flower produced by Kṛṣṇa's energy. He sees the beauty of flower, appreciating Kṛṣṇa's artistic sense. When he hears the sweet voice of a bird, he immediately understands that "Kṛṣṇa is speaking so nicely through this bird." This is called Kṛṣṇa consciousness. Everywhere he sees. Antar bahiḥ.

So if one comes to this platform to understand Kṛṣṇa or to see Kṛṣṇa within and without . . . (break) . . . by Kṛṣṇa consciousness. One who will see Kṛṣṇa within and without always, twenty-four hours. Nothing; he will see nothing. The others, they will simply say, "Where is God? God is dead. Can you show me God?" Such persons will never be able to understand what is God, because they want to see God by challenging. That is not possible. God is not visible by challenge; simply by love and surrender. Then God can be seen. Alakṣyaṁ sarva-bhūtānām antar bahir avasthitam (SB 1.8.18).

Therefore śāstra says that alakṣya . . . Ārādhito yadi haris tapasā tataḥ kim (Nārada Pañcarātra): "If one has come to the point of worshiping the Supreme Lord, there is no more necessity of undergoing severe austerities and penances." Because others, karmīs and yogīs, for their sense gratification, karmīs, jñānīs and yogīs, they have to undergo severe austerities. But the bhakta, somehow or other he can, if he simply learns how to love Kṛṣṇa, then he hasn't got to undergo severe austerities and penance. Immediately he is released. Because that is the perfectional stage.

If you live in Kṛṣṇa, always loving . . . just like the gopīs. The gopīs, they learned how to love Kṛṣṇa. That's all. They never underwent any severe austerities like the great saintly persons going to Himalaya and pressing their nose and something. No, never did. Their only business was how to love Kṛṣṇa. Automatically. Without any . . . of course, that stage is not easily obtained, but the śāstra says if you come to that stage, simply to love Kṛṣṇa, then you are on the highest platform of blissful life.

Premāñjana-cchurita-bhakti-vilocanena santaḥ sadaiva hṛdayeṣu (Bs. 5.38). Santaḥ, those who are devotees, they are twenty-four hours seeing God. That is to be . . . that is the highest stage of perfection. And by Kṛṣṇa consciousness movement, one can be brought to this platform, how to love Kṛṣṇa twenty-four hours without any cessation.

Your sense perception will be defeated if you want to realize by God by your imperfect sense perception. That is not possible. It will be defeated. Adhaḥ akṣaja. Akṣaja means akṣa. Akṣa means eyes. Just like we say, "Can you show me?" You cannot see. Because māyā-javanikācchannam, by the māyā there is a curtain. What can you see? Just like we are very much proud of seeing, but we are seeing because there is light. If the light is taken away, you cannot see.

So your seeing power is conditional. Your seeing power is conditional. You cannot see God in that way. Only if you develop love of God, then you will be able to see always, twenty-four hours, Kṛṣṇa. This is the science. Māyā-javanikācchannam ajñā. Because the javanikā, the curtain is there, created by māyā, therefore everyone is ajñā. Ajñā means foolish, without any knowledge.

Mūḍha-dṛśā. Mūḍha. Mūḍha means the same, ass, those who are seeing like ignorant or ass. What is the example? Just like an actor, theatrical actor, playing on the stage. A child, he is seeing somebody acting, but the child has forgotten that his father is acting. Because the father has dressed in a different way and he's a different posture, playing on the stage, although the child is sitting amongst the audience, he cannot understand that "He's my father playing." Because he hasn't got the understanding. It may be that who is elderly than me, that means one who is advanced his knowledge, he can see. Or the mother can say, "Oh, don't you see your father is playing there?"

Others, those who are paramahaṁsa . . . how . . . Kṛṣṇa does not become visible, because He is visible only to the paramahaṁsa. Paramahaṁsa means the supreme position of a human being. That is called paramahaṁsa.

The first status is kuṭīcaka. Sannyāsa means one has to give up the relationship with family. So in the beginning of stage, because he is newly entered in the sannyāsa life, it is not possible for him to give up immediately his village or . . . of course, when there was systematic sannyāsa system, that anyone had to take sannyāsa at a certain stage.

Nowadays there is . . . sannyāsa, accepting sannyāsa life, is also forbidden, because nobody can actually follow strictly the rules and regulations. And neither anybody has got any inclination to accept sannyāsa. Therefore in this age sannyāsa is sometimes forbidden. Kalau pañca vivarjayet (CC Adi 17.164).

Just like Caitanya Mahāprabhu, the ideal sannyāsī, He says, mama janmani janmanīśvare bhavatād bhaktir ahaitukī (CC Antya 20.29, Śikṣāṣṭaka 4). He never claimed that "I may not have any more birth." Mokṣa means one who hasn't got to take birth of this material body. That is called mokṣa. So Vaiṣṇava sannyāsī, they do not want even mokṣa. Therefore they have no demand. So that sannyāsī is different from the ordinary sannyāsī.

Ordinary sannyāsī, he has demand. He wants mukti. But Vaiṣṇava sannyāsī, either he is in sannyāsī dress or in not sannyāsī dress, simply because his aim and object is to satisfy Kṛṣṇa, therefore he is sannyāsa. Anāśritaḥ karma. He has no shelter of the work that he is doing for Kṛṣṇa. Not that "I shall work in this way, and there will be good result, and I will enjoy it." Other sannyāsīs, they are thinking like that: "I will go austerities and penances severely. I shall go to Himalayas and execute the very rigidly all the principles of sannyāsa. But as a result of this, I will get liberated, mukti." Therefore he has got demand.

So that sannyāsī and this sannyāsī is different. Anāśritaḥ karma-phalaṁ kāryaṁ karma karoti, sa sannyāsī. So this sannyāsī can be accepted even in gṛhastha life, even in householder life. Because in one sense, all these boys and girls who are working for Kṛṣṇa, they have no other desire, they are all sannyāsīs, because they have no desire to achieve any result out of their work. The only thing they want: the kṛṣṇa-bhakti, how Kṛṣṇa will be satisfied. They are engaged in preaching work because they want to satisfy Kṛṣṇa.

Kṛṣṇa says, sarva-dharmān parityajya mām ekaṁ śaraṇaṁ vraja (BG 18.66). They are teaching all over the world the same principles, the same philosophy, that "Please surrender unto Kṛṣṇa and you will be happy." That is their message. They have no other message. Therefore anāśritaḥ karma-phalaṁ kāryam karoti. They are all sannyāsīs.

So out of . . . of course, because Lord Caitanya accepted this sannyāsa, so we are maintaining that system. But actual point of sannyāsa is not mukti, but satisfy Kṛṣṇa. That is sannyāsa, how Kṛṣṇa will be satisfied, how Kṛṣṇa's representative will be satisfied. Because we have to work under Kṛṣṇa's representative. Anything we work, if we want to be expert, then we have to work under some expert. Therefore we accept guru.

We do not serve Kṛṣṇa directly; we accept guru. Yasya prasādād bhagavat-prasādaḥ. The principle is guru is the representative of Kṛṣṇa, and if we work under guru and if we can satisfy, then Kṛṣṇa is satisfied. That is very easy to understand. Suppose in office you are working under some officer. You have no, I mean, acquaintance with the proprietor, but your pay, your promotion will be considered by the proprietor on the recommendation of this officer. When the officer will say, "Yes, this man has worked very nicely," then your increment of pay and your promotion immediately will be accepted by the proprietor.

Therefore śāstra says, yasya prasādād bhagavat-prasādaḥ. If you can satisfy your spiritual master, then you must know that you have satisfied Kṛṣṇa. Because he is representative of Kṛṣṇa, you are working under him, so if he says, "It is all right," Kṛṣṇa says, "It is all right," although you have never seen Kṛṣṇa. And yasyāprasādān na gatiḥ kuto 'pi. And if the spiritual master says, "Oh, you are doing nothing" then your all spoiled, all labor is spoiled. Na gatiḥ kuto 'pi. You have no other shelter.

The karmī, jñānī, yogī, everyone is infected with dirty things. Why? The karmīs, they want that "I shall be elevated in the heavenly planet and I shall enjoy there in the Nandana-kānana, and beautiful wife, beautiful women." That is their ambition. As the people are working very hard here—everyone wants very comfortable life with good bank balance, good house and good wife, good children. That is their ambition. That is karmī. They have no other ambition.

Similarly, jñānī. When the jñānī sees that his good wife, good family, good money and good house is nonsense . . . "It will not stay, but for some years I can enjoy. Then it will be all vanquished." They are jñānīs. They know how things are happening. Therefore they want mukti. But there is still want, that "Now I have given up all this. I don't want this material happiness.

So similarly, the yogīs also, they want to play some jugglery, magic. If they can achieve one of the . . . there are eight kinds of yoga-siddhis. There are many . . . you will find they are showing some yoga-siddhi, and people are after that. People, foolish people, they are thinking that he is God. If you can create something by jugglery . . .

Suppose I am sitting here. I make like this, and immediately I produce something, golden pot. Oh, immediately thousands of people will come: "Oh, here is God. Here is God." Because he has produced a cup, golden cup which is worth, say, two thousand rupees, therefore he has become God. There are many persons, merchants, they are producing two thousand rupees every moment. Then why he is not God? But the foolish people, they have no sense. They are captivated by these jugglery, yoga-siddhi.

Kaivalyam means to become one with the Supreme, mukti. He said, "It is exactly like hell." Kaivalyaṁ narakāyate tri-daśa-pūrākāśa-puṣpāyate (Caitanya-candrāmṛta 5): "And these heavenly planets," the domain, or the objective, of the karmīs, "that is like flower in the sky." And durdāntendriya-kāla-sarpa-paṭalī protkhāta-daṁṣṭrāyate.

So all the bhaktas, those who are pure devotees, he is paramahaṁsa.

So Kṛṣṇa comes to teach this highest science of devotion to make people paramahaṁsas. Not these dirty karmīs, jñānīs and yogīs. Kṛṣṇa's business is . . . Therefore Kṛṣṇa, first condition, says, sarva-dharmān parityajya mām ekaṁ śaraṇam (BG 18.66): "Just you surrender unto Me and I shall make you a paramahaṁsa." Then you will be able to see always Kṛṣṇa.