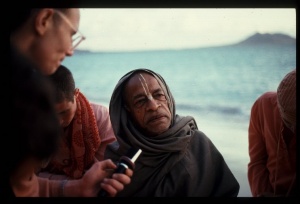 Devotee: One time though the ocean was this high. (break)

Prabhupāda: Actually, before planet was covered with water. Pralaya-payodhi-jale dhṛtavān asi vedam (Śrī Daśāvatāra Stotra 1). It's going down, water. Now the one fourth dried up, and gradually the remaining three fourths will be dried. There will be no water.

Devotee: Is that when Kṛṣṇa incarnated as a fish? Was that on this planet?

Prabhupāda: Yes, when there was pralaya. This is the way how creation carries on.

(break) ". . . these Oriental people, we have to kill their culture." They followed the same policy in India.

Devotee: It's like California little bit, but not so much anxiety. (break)

Prabhupāda: So gradually the ocean water is also being dried up. It is evidenct that water was here.

Prabhupāda: We are also research scholars. Everything we are.

(break) He wanted to preach the glories of name, but there are teachers with title. Ācārya title was given to Haridāsa because he was chanting daily, regularly.